Hunt on a Course

He makes me think about what motivates a man (and it's often, but not always, a man) to go hunting. Something about providing on the veldt.

So, the NBA players-owners agreement. Is it a good deal for the players? Does anyone care?

The minimum amount of attention I've been paying to the matter was enough to glean that the owners were acting like jerks, but big sports team owners always act like jerks in labor disputes.

Overheard comment of a doorman who works at a club that features lots of little indie music projects and local bands, in addition to serving various beers and wines and teas and hookah offerings: "There's a near 100% overlap in the Venn diagram of [people who order hookah for a whole table] and [people who are assholes about the $5 cover for the live music]."

Via The Volokh Conspiracy, Stephen Glass, inspiration for the movie Shattered Glass, wants to be a lawyer but is having trouble convincing state bar associations he has the required good moral character to be admitted to the bar. He was rejected in New York and the fate of his application in California will be decided by the California Supreme Court.

I would be inclined to say no as I find it difficult to be confident that he is reformed and I see no reason to give him the benefit of the doubt. I am curious as to the take of the Unfogged lawyers.

It is kind of interesting, because lawyers don't exactly have a reputation for being cheerleaders of good moral character. I'm guessing the problem is that he can't be trusted with community norms, in particular. Lots of lawyers have terrible morals, but in a way that works within the system.

Have you rehabilitated yourself?

Not sure if this is sufficiently general, but what the hell.

The originally cited author, MJ Wade, has written a series of clear and often interesting papers about beetle genetics with a focus on speciation; this was a pretty neat example, distinct populations that have not yet become separate species but which show interesting incompatibilities upon interbreeding. Also this one, showing epistasis. I would be happier if there were a way to tie SNPs to particular identifiable interacting genes, but that's in the future yet.

Background definitions for making sense of these two papers would be epistasis, Dobzhansky-Muller incompatibility, and Haldane's Rule

I found Wade's early group selection article, which is what was initially mentioned on 11/15, not so great-- careful science, but many possible explanations for the observed effects; that's here. The paper about chickens is clearer, much better control. The behavior papers that were initially cited I did not care for, neither the theoretical models.

So I agree that group selection is not just theoretical, but I suspect that it's like parthenogenesis or prions, an interesting marginal case rather than an essential idea. Actually, parthenogenesis is pretty cool. I could tie together a few papers to talk about that at this same level if there's interest.

A friend tonight asked me what Thanksgiving food I'm excited about eating. Without hesitation I replied, "Green bean casserole."

Don't judge me. Or do; I don't care. But what are you jonesin' for?

Custodians of the Future

His plan was an amalgamation of ideas he has already broached and that Republicans have supported in the past -- creating private savings account in lieu of the current Social Security program, empowering states to administer MediÂ­caid with federal block grants. But Gingrich also took it a step further. Food stamps must go, he said. Public housing, too. Kids should take jobs in their schools -- both to acquire a work ethic and to replace janitors whose union contracts pay them too much.

We had to cut down some small trees to build the addition, and the city requires you replant within a year. (Good regulation.) So now we get to pick out trees, which is kind of fun, especially pre-price-quotes.

There's some kind of local tree that I love that looks like a cypress tree crossed with a pine tree. Also I like the leaves on maple trees. What trees would you get?

By circumstances unmentionable (okay, actually, I banged my knuckle while playing drums, and then continued to play drums, causing the wound to bang against my leg), I have a wicked blood stain on my favorite jeans. Which led me to cast about for folk remedies, since I'd let them sit overnight.

They're currently soaking in a salt-water bath. I'll let you know if this solution pans out.

I'm normally very forgiving about restaurants making mistakes. They're human organizations, after all, and humans screw up sometimes. And observing the way a food establishment fixes a problem can even help to cement my loyalties, assuming they handle it well.

But, I must say, today's lunch screw up was monumentally bad. Either that, or it was some sort of elaborate performance-art project, where someone set up what appears to be a delicatessen, only to do very strange things to the food orders.

Having typed this out, it feels like an incredibly petty complaint. Good thing this is the internet.

One time I was told that readers left Unfogged (in droves, I assume) because it became a Mommy-blog, so I neurotically internalized this as a personal attack, and I never, hardly ever post about my personal parenting experience on the front page. Except I'm going to, but don't you dare count it against me.

The biggest thing I didn't expect is the amount of advance planning that is required. It is staggering how far in advance we have to plan out the tiniest minutia - ie, "Can you pick the kids up today? I want to swing by Target because I need [item] three weeks from now, and this is might be the easiest time for me to grab it at any point over the next three weeks." It's mostly that you can't leave the house on a whim to go run a quick errand. It's not impossible, but it's nice to either plan for the time and energy it takes to take them along, or figure out a way for the kids to be elsewhere. I often feel like I'm using every last ounce of planning capacity in my brain.

We joke about our 7 hour soccer games - an hour to pack up kids, stuff, get everyone dressed and the car loaded up, an hour to get there, unpack the kids and the car and get set up on the sideline, a half hour to get our gear on and get warmed up, two hours to play, half an hour just hanging out with the team afterwards, another hour and a half to take off our stuff, pack everything up, and get home, and then unloading everything when we get home. (We're quitting our coed soccer team after this season. 12 years for Jammies, 8 years for me. We met through this team. But it's a giant PITA and neither of us is heartbroken to drop it.)

So yeah, the planning. Plan on that.

Shearer sent me a post.
I wrote back "If I post this, I will call you an ass because of the last line. Do you still want me to post it?"
He wrote back "Sure, it won't be the first time."

Another indignant Pennsylvania grand jury report (big pdf file) about alleged long standing bad conduct which raises similar issues to the Penn State case. This time about squalid (and illegal) practices at a Philadelphia abortion clinic which went on for years despite numerous red flags in part because of a political decision to stop inspecting abortion clinics.

A NYT story about the case.


Janice Staloski, a Health Department official, declined to investigate the death, saying the department had no authority to do so, the report said. The department's chief counsel, Christine Dutton, defended the agency's actions to the grand jury, stating bluntly, "People die."

I don't have much to say about this except to wonder if the commentariat will be as critical of the people who let the matter drop after their initial reports were ignored as they are of McQueary.

Obviously Shearer's being an ass, but let me explicitly say that yes, I am as critical of people who let these horrible abuses continue as I am of their counterparts in the Penn State scandal. This story isn't as splashy and vivid as the Penn State story, because it doesn't involve anyone famous, nor a flashy unusual context like the Penn State football program. It's still a despicable tragedy.

Next, I debated whether or not to post this, if the only point was a stupid "gotcha! zing!" The big PDF in the first link is extremely readable, but I haven't read much of it yet. Also, there are details of abuse that are way too much for my faint heart. In the end, I decided to post this because the scope of the tragedy is pretty upsetting and you're supposed to publicize things like that, not suppress them.

(I was trying to figure out what exactly the "political decision to stop inspecting abortion clinics" meant. Apparently the DOH in Philadelphia did not inspect the place from 1993 to 2010, when there was a drug warrant, but I didn't turn up exactly why.)

I had this custom made so I could PUNCH THE INTERNETS IN THE FACE. 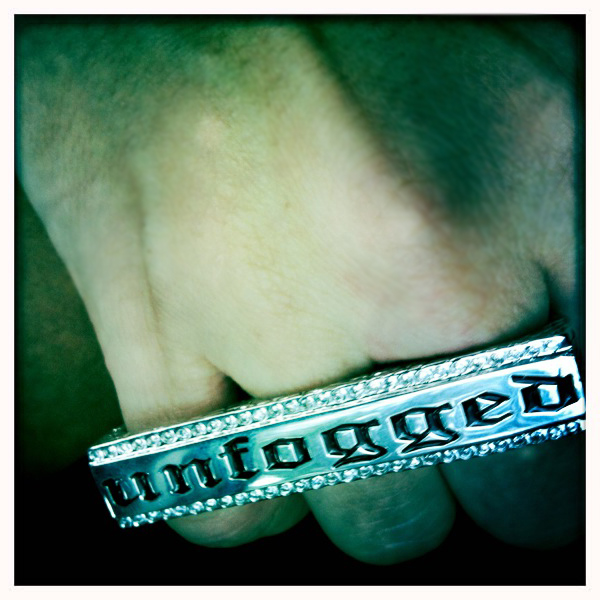 So this is the new year.

I'm amused that 2012 is gaining some cultural relevance as a Forthcoming Year of Doom.