Mom called me yesterday, but I didn't answer the phone, since I was driving, in the rain, with the baby and the baby-sitter, (who is a wonderful 15 year old, despite the email address wwjd###@yahoo.com and that she signs her e-mails In Christ, Babysitter. Both our baby-sitters are highly religious, otherwise lovely 15 year olds.) Mom left a message.

Then Jammies texted me, saying that Mom had left some garbled message on his phone, too - something about texting me - and that I should call her. Now, I get a bit of a panic response since Mom got sick, anytime there seems to be urgency to returning a call. So I pulled off the road and called her back.

The emergency? Was that she was rescheduling an appointment with someone who mostly doesn't answer their cell phone, and just text messages, and Mom had forgotten how to send text messages, and misplaced the piece of paper where I wrote out painfully simple instructions on how to text, and could I text message this person with a message for her to call my mom? That'd be great, thanks!

The whole thing did make me laugh really hard. As a side note, it is really hard to write out easy instructions on how to text message, because there are so many pathways at any given spot, and you want to give streamlined instructions yet encourage the user to use some freaking intuition if the mood strikes them.

"You're not nutter-butters; you're just being you!"

Via ari, Seth Masket asks "So why is the Right acting the way it's acting?"

He tries to answer that question by pointing to some social science research findings, most notably:

He goes on to tie each of these findings to specific developments in the past year or so. Interesting stuff, though I'm not quite comfortable with his minimizing of the racism aspect: "Now, I haven't even mentioned the president's race. Yes, it's possible there's some racial animus folded into all this, but you can explain much of it without reference to race."

About that tea thing in Boston...

So television in the UK is, from time to time, funny? That must be great. We're all moving back. (And we've got some hangers-on.)

At least they aren't spring-loaded.

Oof. If you thought the Oscar Pistorius case was a complicated question, you ain't seen nothing yet.

World champion 800m runner Caster Semenya is a hermaphrodite with no womb or ovaries, an Australian newspaper has claimed. Quoting a source close to the International Association of Athletics Federations, the Sydney Daily Telegraph said Semenya had internal testes - male sexual organs which produce testosterone and which in turn produces muscle bulk, body hair and a deep voice. The 18-year-old won gold with a sensational final-lap sprint to streak away from the competition in Berlin last month. Britain's Jenny Meadows took bronze in that 800m final.

Now, the paper said, the IAAF is expected to disqualify Semenya from future events and advise an operation because the condition carries grave health risks. The IAAF received Semenya's gender test results today. However athletics chiefs said they would not be revealed for up to two weeks - once they had had a chance to speak with Semenya.

I have no clue how to handle an intergender competitor in sports that are gender-segregated, but dealing with sexuality issues as a teenager is already a minefield. Dealing with them when your particular ones are a headline story around the globe? No matter whether the SDT's source is correct, I really feel for her.

I am coming around to the idea that there's no such thing as willpower. There are only two factors that determine one's resistance: how tempting do you find the item/activity, and how good are you at devising strategies.

"Willpower" is just a fake-out for pretending that everyone finds the item/activity equally attractive or fetching. (I propose that we use fetch here to describe how tempted you are by the thing.)

Anna Nicole Smith's daughter turned three, and she is the spitting freaking image of her mom. 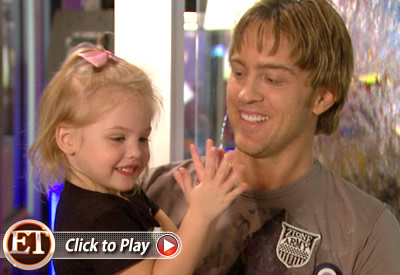 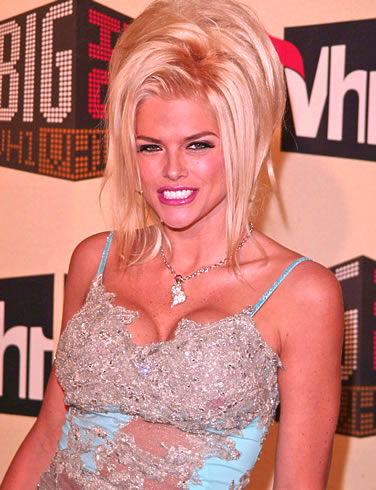 The Arlington Independent School District in Texas decided not to show President Obama's address to students live yesterday because it reportedly didn't want to interrupt its regularly scheduled lesson plans. However, the district has now decided to bus its students off-campus on Sept. 21 to hear President Bush speak.

Or should I say Corpgress, hmmm?

As long as we probably need to get a health care thread up and running anyway, I'd like to ask a question: Why is there not huge amounts of lobbying from corporations from every single industry that provides employer-based insurance, besides the insurance industry, in favor of a public option?

Also, on the radio this morning when they were talking about how the Supreme Court might reverse campaign finance reform, I got very dark and stormy on the inside. This is relevant because I hate that my health care question is "Why are there not equal and opposite amounts of lobbying?" I hate the eternal corporatification of Congress.

Did I miss anything?

OK, folks. It's time to put your typing where your mouth is.

Have you complained about our government's security theater? Our lax or misguided border policies? Our contradictory efforts in disaster planning, or our priorities in domestic versus international terrorism?

You've got one day left to speak up and tell the Department of Homeland Security what you think.

DHS is asking members of the public to vote on its priorities, and add comments to an online discussion. (So far there are only 300 comment topics, which seems kinda lame to me considering it's Our National Safety 'n' all, so step it up, people.)

There are four quick steps.

1. Visit the DHS Quadrennial Review website (http://www.homelandsecuritydialogue.org/dialogue2/) and register. It's quick and you don't have to use your real name.

2. Pick one or more of the four topic areas (counterrorism, borders, immigration , disasters), and spend 2 minutes ranking DHS's objectives in that area.

3. Head to the discussion forum. Ignore the clunkiness of the UI and see what your fellow Americans have to say. Vote up or down on others' comments as you will, and add your own.

4. Bask in the glow of the diligent exercise of citizenship.

Check out this letter to the editor regarding idiotic Broderism! Surely, as articulate expressions of principles no doubt passionately held go, it is top notch.

I have it on good authority that the author is single, laydeez.

You should listen to the [internet] radio! Like, tomorrow, for example, when you can hear brutal progtastic stuff purveyed by the likes of Tipographica, Upsilon Acrux, Blast, Yowie, Boud Deun, Many Arms, 5uu's, and jazzy stuff purveyed by the likes of Joseph Jarman, Angles, and David Sanborn (for serious), and some pieces in what I gather the kids call the metametric style. And some other stuff. 3-6pm pacific, folks.

Peer pressure - well, mainly Witt - leads me to suggest this article, which I already buried in comments, for a post. The key findings:

Maarten Selfhout-van Zalk, a researcher with the youth and society research group at Orebro University in Sweden, says that for teens with few friends and weak friendships, more time spent online is a good thing.


"We found if they chat more, with strangers specifically, they increase in their well-being over time," he says. "They gain positive feelings from that; they actually experience better self-esteem."


He said they expected Internet usage to have detrimental effects on lonely teens who were investing more time in online friendships than real ones. Instead, their research suggests the Internet acts as a social training ground, where such teens can meet people, create support networks and build their confidence and social skills for real-world interactions.


The researchers found that surfing without interacting with anyone was actually detrimental to teens' well-being. This is where addictive behaviour may come into play and cause adolescents to isolate themselves, he says, and other studies have shown surfing for pornography, in particular, is detrimental across all age groups.


I don't know what that means for lurkers.

But oh sometimes I think about you, with your rhinestones and your sequins.

One time I quipped "Hip-hop is all about cheating, whereas country music is all about being cheated on." I thought I was being pithy and deft, but I got chewed a new one for being stereotypey and racist. (Nowhere near as bad as the time I overgeneralized about the behaviors-by-ethnicity of school groups who took field trips to the trout farm where I worked. My observations were definitely problematic, yet I was young and in college and thought that my observations cleverly broke with stereotype. Anyway, a family member yelled at me and I cried.)

Back to the music, though, I still think there's something there, and maybe if I explore it with sensitivity and thoughtfulness I won't regret this post. Presumably most of this cheating is happening within a culture, and so both the hip-hop and country crowds contain their cheating, and thus have equal parts cheating as being cheated on. It's just a matter of which camp contains the musical talent. It's just a matter of which camp the musicians identify with.

So does country culture invite celebrating self-pity? And hip-hop culture invite celebrating deceit? I don't think it's that simple. If I had to guess, the being-cheated-on stems from how country culture lauds prostrating oneself quasi-religiously. And that doing-the-cheating reflects the internal tension from the negative stereotype of black men as unfaithful rolling stones. How individuals sometimes choose to celebrate a negative stereotype, to take the sting out of it.

So I don't think this contrast has emerged from a single current, manifesting itself oppositely.

Also one time I tried to make a mix CD of country songs about The Rodeo As A Homewrecker. I think I got four songs, which was insufficient.

"I … am drawn to Buddhism and Hinduism. I believe there is only one God and no religion is right or wrong."

All right, let's get the embarrasing part out of the way: I used to listen to Lovelines all the time, until Adam Corolla left and the radio station here stopped carrying it for a while.

I assert that there is a way of writing your answers on a math test that accomplishes the same thing. It's when you leave out so many details that you're daring the teacher to call you out, and you sort of scribble your answer so that maybe you write over the text of the question, rather than use the space provided. All ways of saying Fuck you and your stupid hoops.

(I really do like being in the classroom enormously. I'm very glad to be back at work. See previous post title.)