Counterpoint: the hipster moment is always already at its apotheosis, because the revolution is and must be permanent.

The successors of n emailed me to let me know that they, reclining, will dine and drink and discuss the hipster; Otto von B. emailed me to let me know that tom has views about this, which prompted me finally to actually look at the email, which, despite being more or less what one would expect (ie, simultaneously a locus and the description of a locus of bloviation) is nevertheless not what one has anticipated—wherein its brilliance (for who could deny the successors of n brilliance? N does not go down easy!) must surely lie.

Why anyone in his, or, these days, her, right mind would want to attend the event, is beyond one: who could possibly care? Or, caring, could want to be present for the event? Surely even the hipsters, and those who have progressed beyond hipsterdom, have some interests outside omphaloskepsis (even if not, presumably revealing its pride of place is illicit)—the whole premise here is silly. One simply can't wait for the book, but that remains, alas, only the promise of a promise of happiness: something more direct can be got by contemplating the question posed in the flyer, "who is free enough of the hipster's taint to write the hipster's history without contempt or nostalgia?". This is really a sentence that rewards close study.

I'm kind of amazed by the snickering that greeted Ann Althouse's announcement that she is marrying one of her commenters from other bloggers. It could just be the incestuous nature of Unfogged but I don't see a pairing of a blogger and commenter (or two commenters) as that unusual. Ogged (successfully!) trolled this blog for dates since it inception and one would need a diagram to describe all of the Unfogged-related dates/hookups/marriages.

And that sour-milk smell that pervades your clothes and bedding. Mmmmm.

I always say that I would have been a champion smoker. I've never had a cigarette, mostly because of the strength of that conviction. I love rituals and habits. I love the idea of compulsively stepping outside for five minutes to hang out in the sun and smell the roses. I love that cigarettes give you something to fidget with, and that they provide a great way to hang out with strangers without being compelled to make awkward small talk. (I'm really grateful that I never tried it out. I attribute that to my mom's honesty, where she basically always said the same thing - she would have loved smoking for various (different) reasons, and she feels relieved that she never picked it up.)

Breastfeeding is pretty much the opposite of smoking. But I'm looking forward to that mandatory break, where you're forced to stop and smell the roses. That sounds peaceful and nice.

Show up tomorrow and learn the answers to these and many more of life's most important questions:

Becks was, as of this morning, planning on being there right around seven, hell-bent on a mission to secure a spot. Your prompt arrival can be of assistance to her fight against the masses. I, in a move that's boldly hypocritical, will likely be a bit late.

We've got a shiny new server (our host was moving datacenters and made us switch) and all appears to be working for me. Good for you, too?

Ben deserves a big hand for all of his work to get this set up. He worked some serious hours yesterday and today to get the DNS entries sorted out. Please show him some love. No, really.

God do I hate April Fool's Day. Pranks are bad enough but even worse are when sites (especially news or political sites) put up joke posts. I feel like I'm sorting those out of my RSS reader for days afterward. Respect the integrity of the Internet, people!

Not sure if any of you have experience with these things but is this typical for an adoption site? It seems to me that the site must be, at a minimum, playing loose with some laws.

You're like that guy that picked me up when the extra footprints in the sand disappeared.

Jammies and I got a form letter today from Jammies' younger brother, who is in a fraternity at a state school. They are fundraising for their yearly charity event. Let's be clear: this is a face-painting at the football games, Greek Week Rocks, couches on the porch caked with puke, regular old fraternity. Not a professional frat or something.

The first paragraph of the letter explains their yearly donation project. But the second paragraph is the best part:

This year we are trying something new; we are requiring every member to mail this letter to ten members of their families and to their friends. This is because we realize that the purpose of fraternal organizations is to develop well-rounded and socially conscious members of society. Please recognize this important opportunity to help make a difference in the XX Chapter of the XY Fraternity.

Oh thank you thank you, special fraternity! The way you model socially responsible behavior is truly eye-opening to me, and helps me mend my depraved ways. You're like the big torch off of which I light my puny sparkler of generosity. I am Bette Midler flying because of your breaking wind. Or something.

We got e-mails yesterday that began:

You are probably aware that legislation has been introduced in Austin to allow individuals 21 and older to carry concealed handguns on college campuses in Texas. These bills are starting to work their way through the legislative process and the National Rifle Association is lobbying hard for their passage.

(The e-mail went on to encourage us to write letters against this.)

You might be feeling jealous right now that your state or nation is just so entirely sane that you never get to write letters about whether or not to the state should facilitate kids shooting each other. See, if Virginia Tech had had a law on the books like this, then the tragedy would have been averted because the shooter would have been legally packing. Or something. Anyway, we've thought through the implications real thoroughly and we're pretty sure nothing can go wrong.

(Other states have tried to pass similar legislation, but we're particularly delightfully close to getting enough support for it to pass.)

Now That They've Destroyed The Economy, Can We Take The Giant Tacky Flag Down? 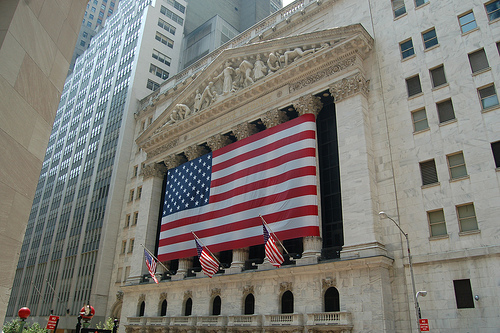 The giant stupid flag wrapped around the NY Stock Exchange has been annoying me since I first worked in the neighborhood, in 2003. Look, I realize lots of people did dumb things in response to 9/11, and as bad decisions go the big stupid flag isn't nearly as bad as invading Iraq, but it's ugly and tacky and dumb, and now would be an excellent time to quietly make it go away.

I'm not totally lacking in patriotism -- I don't mind hanging the normal-sized flags off the flagstaffs out front. But the big one just makes the Stock Exchange look like a used car dealership, and it's hideous.

Oh, and did you hear what the drummer got on his SATs?

Drum solos are anathema to me in a way I've never fully figured out. The trading-fours-type thing is okay by me (for instance), possibly because the boundary of "four" (or "two" or "eight" or whatever) is…comforting? Easy to follow? Something like that maybe.

It's the extended solos that tend to irk (an example). In front of a live audience, the incentive is simply to keep pushing the volume and speed further and further. And I get that part of the point is to showboat a bit; to swagger; to brandish one's bravado and otherwise mix metaphors. But it's just too easy to go way over the top, and so many drummers do.

The context of my thoughts: playing a gig last night, we were doing the trading-fours thing (a guitarist and I), and the guitarist decided the fours were going over so well that he was going to put me on the spot for a full-on drum solo, which turned out fine, whatever. But I feel bad about it.

In early March last year, a couple days before the Texas Primary, Jammies and I went to an Obama Rally and bought this great poster: 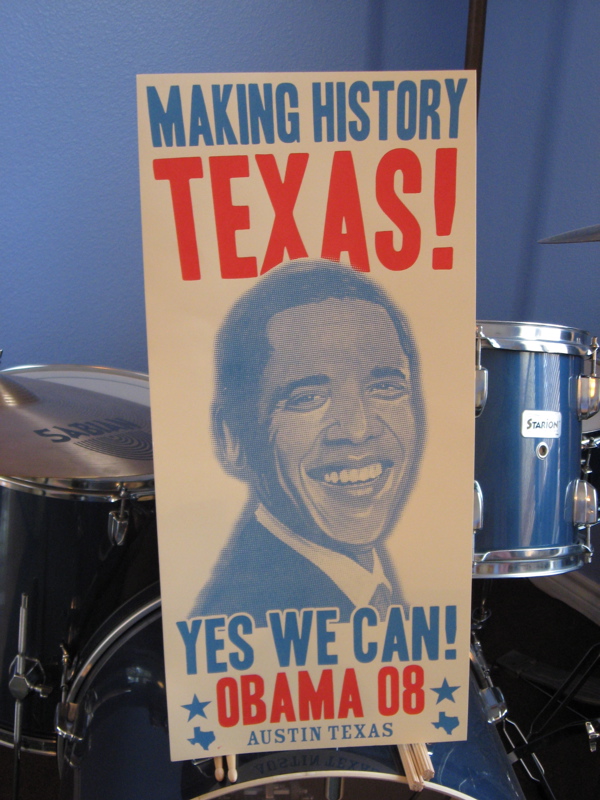 This was right when mathematically, Obama had secured the nomination and Hilary was gearing up for her faux-surge and getting nasty. I decided superstitiously that the poster, despite it's greatness, should not be hung up or framed for posterity until the election was over.

Then there was a bunch of months and Obama won, then a bunch more months and we finally got it framed, which was good because it was starting to get creased and damaged and I really do think it will be an awesome poster to own in fifteen years.

The problem is that right now, it seems vaguely creepy and Our Dear Leader-esque to hang a picture of the sitting president in your house. Is it too blindly loyaltastic to do so? Objectively, it's a great poster, and the framing job is wonderful. But still, I dissent from Obama all the time, (whenever Our Dear Unfogged tells me to), and I don't want guests to feel they must avert His Watchful Gaze whenever they voice their opinion.