I really enjoyed this essay. It's meandering: first, it's about this guy in the 1930s with total amnesia, who lives as Mr. X for 7-8 years. Second, it's about the author's great-great-aunt, whose life intersects Mr. X's life, and who plays a role in getting him into the public eye. Finally, it's about the incompleteness about what we ever know about other people, and how we like to make narratives nice and pat, and probably the reality isn't so nice and pat.

Two other thoughts:
- "Pinetucky" is a little on-the-nose for the name of a tiny town of origin in the south.
- The mental hospital where Mr. X lives is so nice and pleasant. It's a little amazing that we once created such pleasant institutions for our vulnerable citizens, even if only restricted to white male vulnerable citizens with somewhat upscale trappings. Ok, maybe it isn't surprising, but wouldn't that be nice if it were the norm?

via Firefox suggests articles to me whenever I open a new tab and their learning algorithm is kinda great for me. I've never heard of the Atavist magazine.

So, I attended an athletic training class yesterday (as part of a teaching evaluation). It was very interesting, and the instructor was great! No complaints.

The topic was respiratory distress, broadly, and the students were new college students who are just learning the broad strokes about triage: what symptoms are in your lane, and what symptoms mean that you need to call 911.

Then she says, "You just need to look for whether their chest is rising and falling, because nearly everyone is a chest-breather. Obviously being a belly-breather is better, but virtually no one is."

So I've heard this distinction between chest breathing and belly breathing before: yoga instructors love it and so do singers. I remember vaguely hearing something about vagus nerves in the brain? And long slow breathing which calms the vagus center or something? This instructor is clearly implying that we should be belly breathing even off the yoga mat, as a matter of daily life.

So: aside from singing maybe, or when you're actively hyperventilating, what is the superiority of belly breathing? Is it all bullshitty hype? It seems reasonable to be skeptical when people say, "This thing that people instinctively do as a species since time immemorial is actually bad for your health, and we just recently noticed it." Is there any reason to believe that - on the veldt - we took deep, virtuous belly breaths from our cores?

Dorland, Larson, and the kidney.

I'm seeing takes on this Bad Art Friend article, and so I'll share mine too.

The gist of it is that Dorland donates a kidney to a stranger and writes about it on Facebook, and then her old friend from grad school Larson publishes a story about a woman who donates a kidney to a stranger, and gets all sorts of acclaim for it, and then Dorland feels exploited. Dorland does a little digging, and finds parts of her own Facebook posts have been lifted in earlier edits of the story, and goes after Larson, and somewhat successfully casts aspersions on Larson for plagiarism.

My take: The author obviously likes Larson much better than Dorland. The subtext is that Dorland donated a kidney and then demands an absurd amount of praise and attention for it. She sounds kind of grating! A big part of the article is how Larson withholds praise from Dorland, and Dorland is hung up on it, before even learning that Larson is writing a story inspired by Dorland. And then the final punchline is that in the story, the kidney donor is kind of a shitty white savior character and the recipient is not white, and also Dorland is white and Larson is Asian-American, and Â¯\_(ã )_/Â¯, who can say?

What's not said in the article (and who knows whether Dorland is self-aware on this point) is that plagiarism aside, of course Dorland's feelings are massively hurt by the not-subtle implications that she's a superficial SJW who does everything for the praise and looking good. Maybe it's accurate! (And maybe it's not.) Sometimes people kind of suck, and it hurts to find out the ways in which people think you kind of suck. That's my take.

I have a take! Larson wrote what sounds like an excellent story and ruined it for herself by knowingly plagiarizing that letter. Her reputation will and probably should survive this, because Dorland does not come off well. But there's no excuse for not changing that more. ð©ââï¸

Who invaded this poor woman's house in the 21st century?

This is a very weird story: She Bought Her Dream Home. Then a 'Sovereign Citizen' Changed the Locks.

It reminds me vaguely of that story about citizens who happen to live near a geographic spot picked by a computer algorithm to be the center of the country, who then get bombarded with a nightmare amount of bureaucratic avalanche of (I can't remember the details - defaulting on nonexisting payments? things being sent to them? accused of crimes?)

I guess Facebook, Instagram, and Whatsapp are all down right now? I'm not on FB much, but I use Whatsapp constantly. It's a little eerie how quiet it is.

I know this is Yahoo News, and so many parts of the website visually signal that it's unserious, but I think this article is smart:

One possible way to read "The Facebook Files," The Wall Street Journal's excellent series of reports based on leaked internal Facebook research, is as a story about an unstoppable juggernaut bulldozing society on its way to the bank....But there's another way to read the series, and it's the interpretation that has reverberated louder inside my brain as each new installment has landed.

Not financial trouble, or legal trouble, or even senators-yelling-at-Mark-Zuckerberg trouble. What I'm talking about is a kind of slow, steady decline that anyone who has ever seen a dying company up close can recognize.

Updated to add: omfg, I missed the byline that this is a NYT article. ha. Now it doesn't seem like a diamond in the rough but just another hot take.

When I was growing up, my mom had a clam spaghetti dish, which I loved. The recipe calls for 2 cups of clams and 2 cups of clam juice. In my mom's best friend's handwriting, there's a footnote to the recipe that you can get some of the clam juice from draining the clams, but you'll need to also buy a small bottle of clam juice to supplement.

I make it now occasionally, and half the Geebies love it (and the other two are happy to eat plain noodles). I must purchase 6 cans to get 2 cups of clams, and I am able to get 3 1/3 cups of clam juice just from draining them. Progress!

As a side note, I think clams are a guilt-free form of seafood? along with anchovies and maybe scallops? (I just had the extremely ditzy moment of looking up scallops because I didn't really know what they were, and finding out that they're the ones that live in shells that are ....scalloped.)(I guess using 6 cans isn't great, environmentally.)

Just as a charming bit of ephemera: 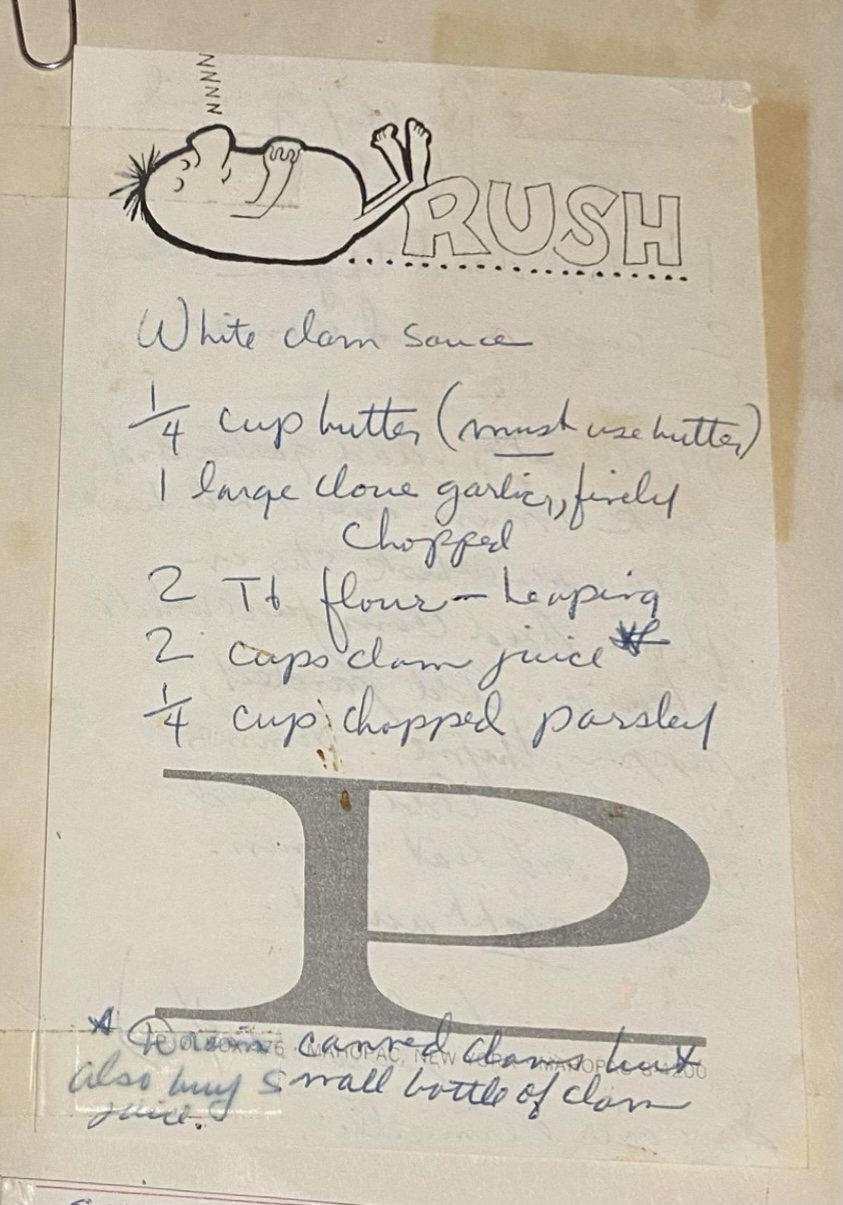 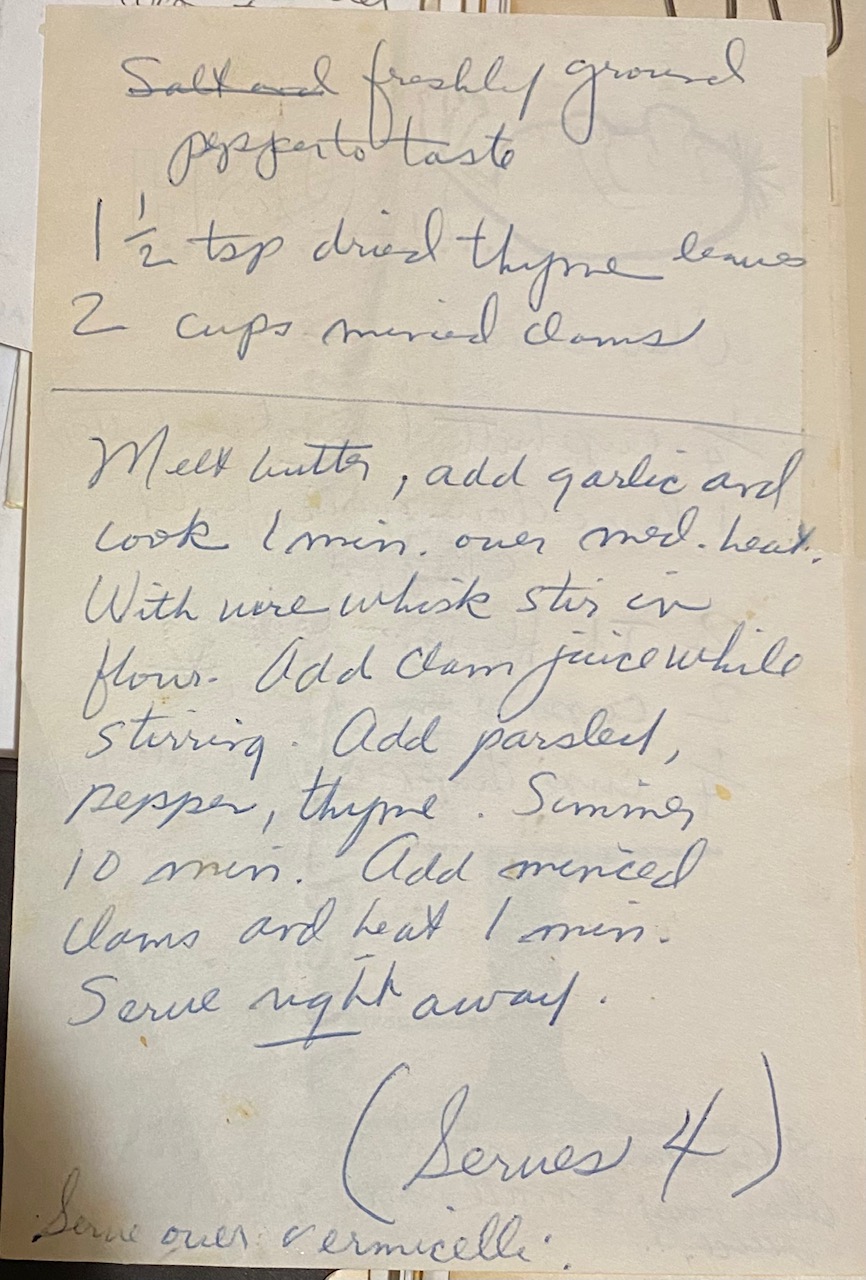