Tis the season to remember.

Does anyone have a gingerbread recipe they swear by, for construction purposes? We have to build a model of the Alamo.

Mossy Character writes: Prompted by some Tooze tweet, I did the numbers:* 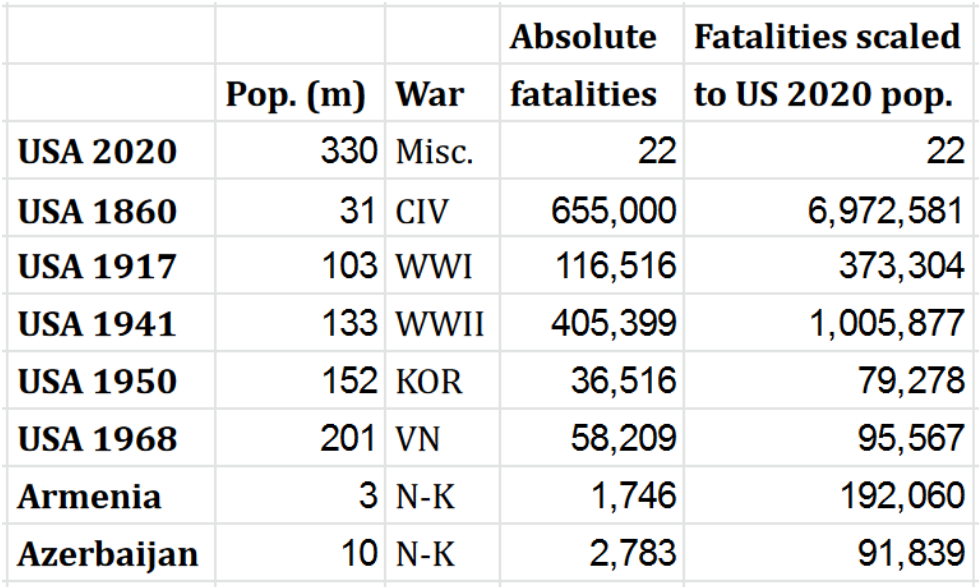 So, Azerbaijan had a Vietnam, and Armenia had a Vietnam and a Korea, all in six weeks.
*Very roughly. I took the lower numbers for Nagorno-Karabakh.

Heebie's take: I vaguely went looking for the Tooze tweet to see if it added anything:

and I can only imagine this retweet is the one:

Caretakers: You are an adorable senior citizen. pic.twitter.com/pgxAa9JORG

It is so wonderful.

Mild Guilt All Around

I'm getting vaccinated tomorrow. My wife's organization has doses, and more patients than expected are turning it down (these are mostly very poor undocumented people and I have no idea where the resistance is coming from), so they're giving them to household members of the staff. We tried to shunt it to my mom, but no dice. It's such a broken system, but every vaccinated person helps, so it's not like I'm going to let it go to waste merely on the grounds of horrifying injustice.

We've been strict, and it's taking a toll on my extroverted older son, so I'm glad that this is something like the beginning of the end of quarantine for us (my wife has already had her two shots), but not going anywhere and only seeing my own family has suited me so well that I feel guilty about it. Living alone for the past year--quite possibly without touching another human that whole time--sounds very rough.

Updated to add: oh I see it now. how nice.

Most of the farms are small and focus on broiler production, and contract fees account for the bulk of the farms' gross income. Contract growers make a substantial and long-lived investment in broiler housing, usually financed by borrowing from commercial banks or the Farm Credit System. While most farms have maintained long-term relationships with their integrator, the actual contracts frequently cover short durations and only limited commitments for the placement of flocks.

Not included: regulatory structure that makes smaller scale and organic production much more expensive, chicken slaughterhouse safety stats and industry lobbying to keep the lines running faster with plenty of warning before inspectors can arrive.

previously linked and discussed, but so great: Jamie Oliver helps explain why starting with a whole chicken is such a good idea.

Heebie's take: First off, I've had guests posts straight since January 23rd and I am not complaining one bit. You all truly supply a much more varied array of topics than me.

I hadn't watched the Jamie Oliver video before, but it turns out it's only 1 1/2 minutes, so I could handle it. I didn't realize that bones were included in chicken sludge. I think the part of pink slime that disturbs me is less the Jamie Oliver bit, and more the ammonia and whatever else in it that's more medical than culinary.

Also we tried out Impossible Burger for fun the other day, and I was a little grossed out by the smell. I guess I'm on Team Fake Meat Is Raised In The Uncanny Valley. If you judge a fish by its ability to climb a tree, then the tree still won't taste quite like fish, as they say.

J, Robot writes: I think the writer has oversold his case here, but he's not entirely wrong. The cruise ship comment and the mask guidance were both dumb, even given what Fauci thought to be true at the time. OTOH, I do believe that Fauci most likely did more good by staying than leaving, and he showed better judgment in knowing when to publicly contradict Trump & the White House than did Birx.

Hero worship is dangerous (even if it's never stopped me from having heroes). Fauci's decisions during the pandemic deserve as much critical scrutiny as those of anyone else in top public health roles. At the same time, the public clearly needs information and guidance from public figures that they can trust, and insofar as Fauci is playing that role that's a good thing. I hope that he hasn't let his celebrity go to his head, and that he's open to criticism and competing opinions, but I hope that of every agency head.

As for this section:


"The AIDS crisis convinced Fauci of two conclusions simultaneously: (1) that science is never devoid of politics, and (2) that the wisest strategy for achieving his aims -- in the politicized world of science -- was to pretend, at least in public, that he didn't know or believe conclusion #1. "He put the two lessons together and came up with his signature bedside manner," Roberts wrote. In other words, Fauci would operate with the knowledge that politics were inescapable, while insisting, fervently, that "science," "facts," and "reason" can (and must) be quarantined from power and partisanship. The idea of a strict division between science and politics was itself a noble lie, one he has publicly endorsed ever since.

As a matter of epistemology, and as someone whose research has been heavily influenced by Foucault: I get it. This era has been great for providing examples to teach my students about what it means to valorize Science, Facts, and Truth as apolitical and outside of power, why it's so tempting to do so, and also why one might hesitate to make this move. As a matter of fighting a pandemic, I want my public-facing officials to make pragmatic decisions about effective public health communications, and I'm absolutely fine with some level of epistemic hypocrisy.

Heebie's take: It is definitely worth reflecting on Fauci's roll in the past year, but I think he was ultimately just a figurehead. How much did the left worship Fauci in the context of, say, a group of adults, and how much of it was just contrast with the rest of the clown car and relief that we weren't watching Dr. Spaceman (pronounced spa-CHEM-in)?

I personally think one of the biggest failures was the failure to stress early on that safety practices would be continuously updated as scientists learned more. That best practices would be evolving and that being prepared for flexible, changing responses is the most responsible course.

At the end of the article, the author basically says that Fauci's presence did nothing and Fauci could have had a much bigger impact if he'd taken on Trump as an outsider.

Fauci underestimated how much good he might've done from the "outside." As I've emphasized, the medical and public health establishments have worked in lockstep with Fauci throughout the crisis. Barely anyone has contradicted him; almost everyone has looked to him for leadership. When he moved, they moved. For many public health professionals, the very fact that Fauci stayed where he was -- at Trump's side -- was itself a signal that the White House wasn't fucking up too badly. By the same token, if Fauci had publicly denounced the White House's approach, he would have united the entire medical and scientific community behind him. The effect of such a collective action is difficult to predict, but it's not unthinkable Trump could've been removed from office, especially if Fauci had sufficiently damning evidence to share.

I don't know what the author is smoking, but that's all nonsense. There were plenty of outside scientists furiously disagreeing and failing to gain traction as The Spokesperson For All Outsiders Great and Small. And the "unthinkability" of Trump being removed from office is super dumb. Sure you can think it, but it's untethered from reality.

Fauci is a mealy-mouthed guy who likes being the calm, demure scientist in the room, and who ultimately had very little power either way.

Minivet writes: We had 118 responses to the survey. Almost everyone has had COVID-19 affect their life in some way. Only 7% don't know anyone who got it, and 10% got it themselves (versus 14% of the general population per Census Pulse): 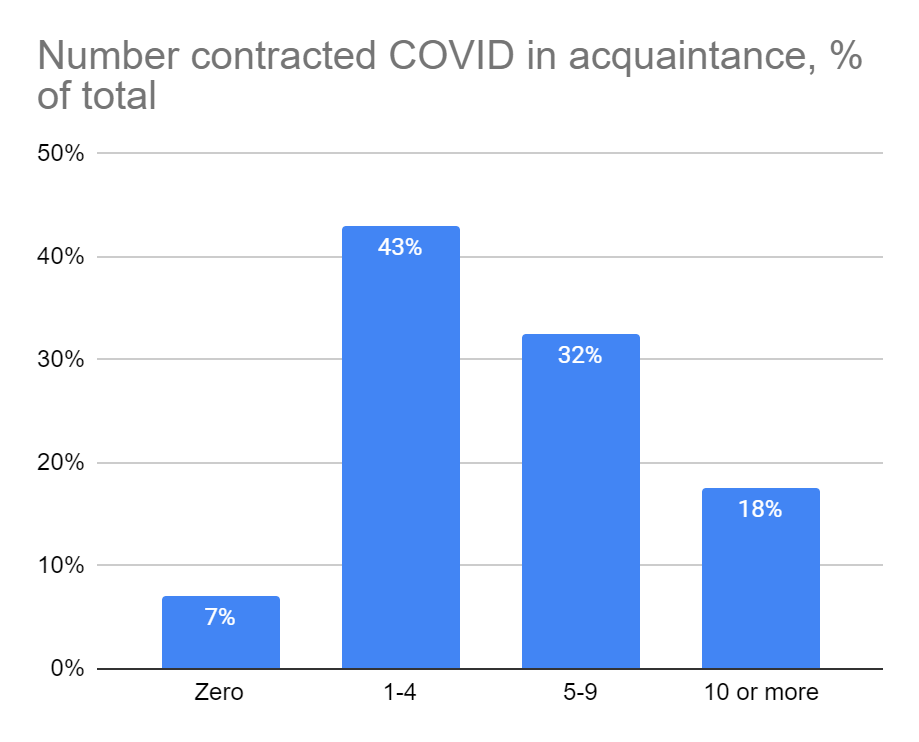 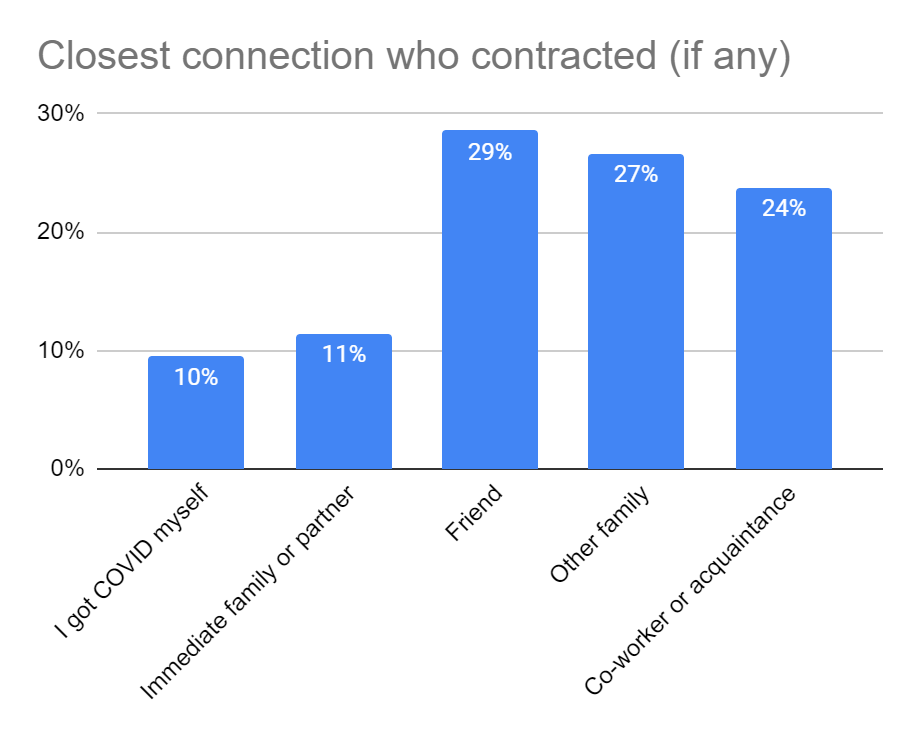 There's been a lot of death, but most of us haven't had it in our close circles: 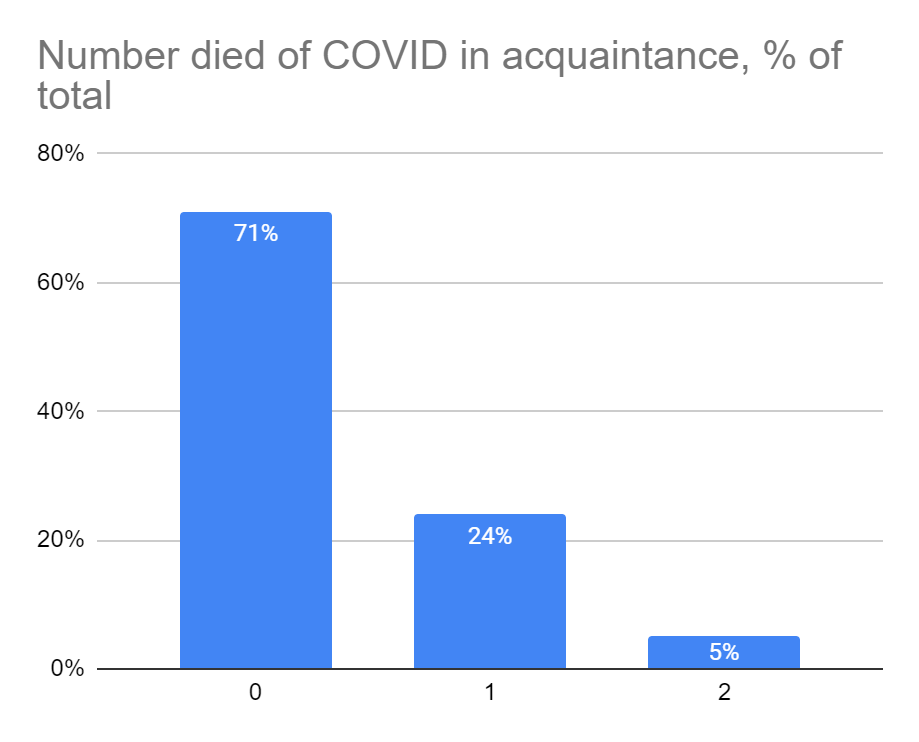 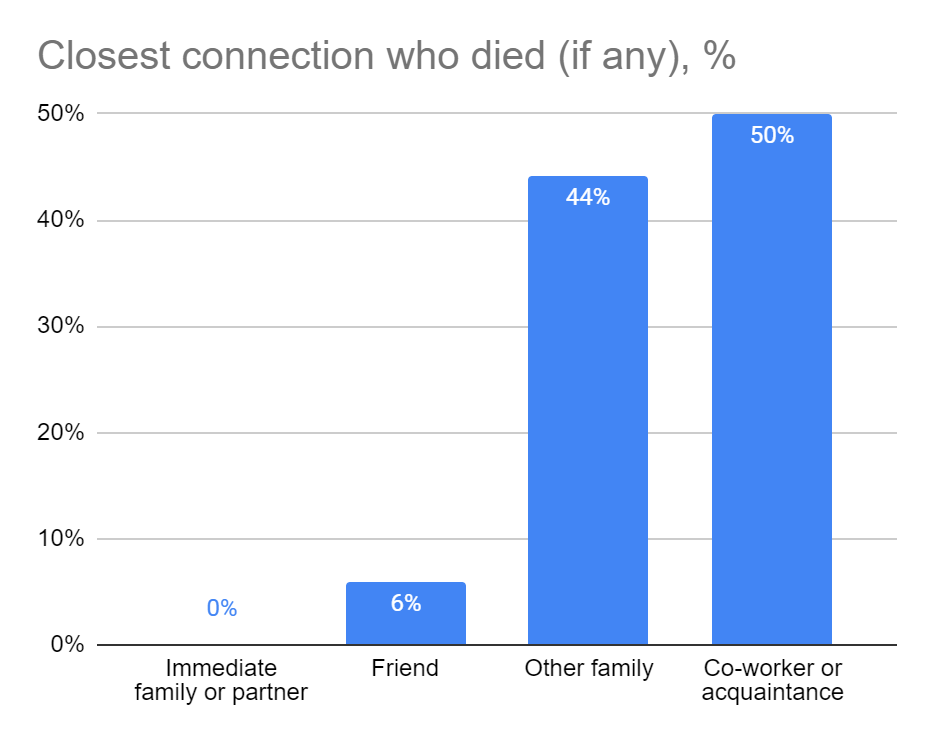 Our vaccination rate is slightly lower than in the general population, possibly due to age distribution: 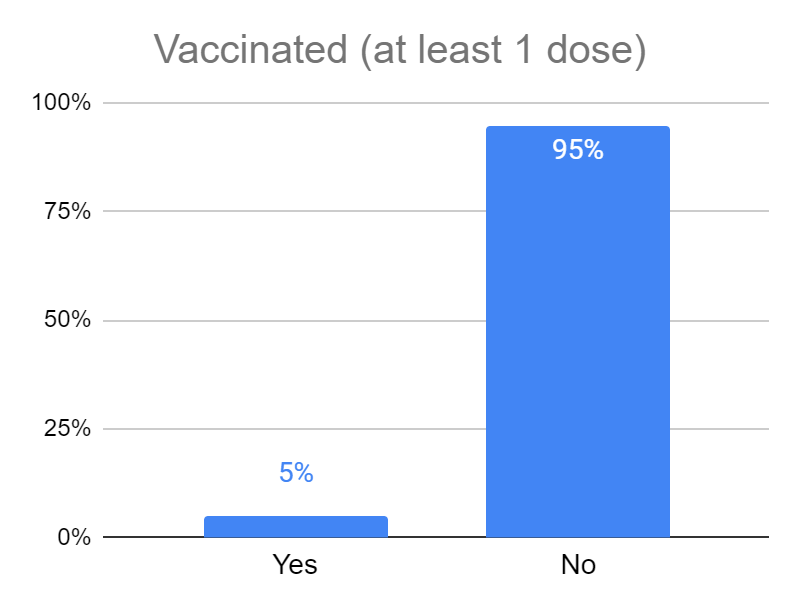 And unemployment / serious economic harm. Most of the "other" responses detailed economic harm they thought not to rise to the level of "serious". 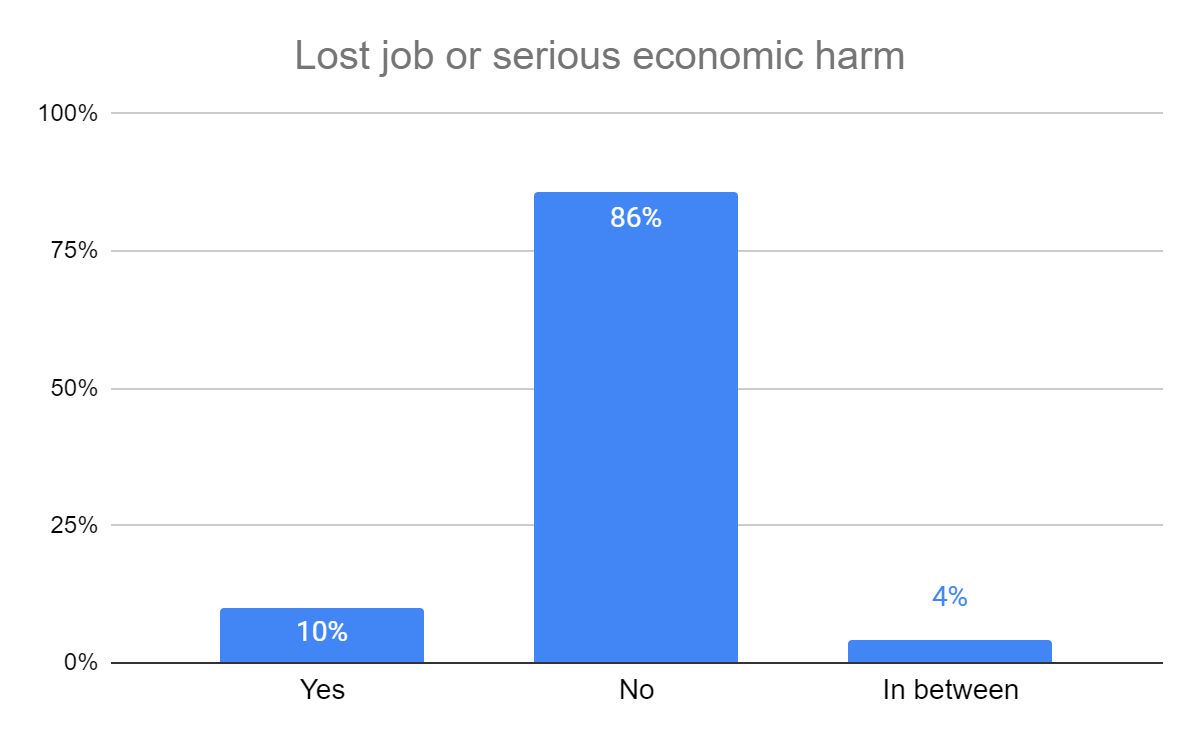 Looking for comparisons to the above in Census Pulse, that survey found 48% had themselves or a family member lost employment income. Much higher figure, but also of course a broader question.

Unfortunately I neglected to ask what continent or region respondents lived in; that would have been interesting.

Here are all the thoughts people shared about their experience, in alphabetical order:

(This one hits a little too close to home: I have grown far too comfortable with the isolation.)

Chill writes: Kevin Drum, as I'm sure you know, is going to quit blogging at Mother Jones. He helpfully provides a summary post of his current takes on the state of things.

Compared to the Unfogged ethos (or if I can't speak for the Unfoggedsphere, at the very least compared to me), KD's take is much more likely to be "everything is fine" than my general hair on fire "everything is horrible." In some specific areas KD is GREAT with this. I really do appreciate when there's something the liberal blogosphere is making insinuations about that Drum neatly punctures (sorry, lacking an example here but it happens frequently). Sometimes he's right. Things are fine. But the idea that everything is pretty much normal, or that general happiness surveys mean much (don't people report about the same degree of happiness regardless of the level of hardship?)...I don't buy it. Policies are actually OK, yes. The economy...that stat about the percentage of families who would be thrown into turmoil by an unexpected $400 expense...not OK. That about half of the country voted for Republicans...that's an existential threat.

Heebie's take: I have similar questions! Has he always been this manaically optimistic? Or is he a frog that's slowly been sitting in water of an increasingly lovely temperature? Here's another recent "stop fretting" post.

On the whole, the damage of a 24-hour newscycle perpetual hot take machine does create liberal anxiety, albeit in different ways than conservative fear, and it's good when he zooms out and focuses on that. It really is comforting. (Although not even Drum can spin climate change into anything other than existential fear.)(And doesn't he sometimes have a paralyzing fear of AI?)

But like Chill points out, it's sometimes not the right metric. My sense is that he looks at trends and says "hey, the first derivative is still positive! Life is slowly improving on these metrics! Why all the hand-wringing?" and the answer is often "Because we're still two miles underwater," as illustrated by Chill's financial precariousness example.

I have a "two kinds of people" theory, and I think it has something to do with your childhood perception of how safe and solid the world seemed. It's a variant of optimist/pessimist. Take a social problem which has existed for hundreds of years, and the sentence fragment, "Problem X has been around for hundreds of years, and..." One group will finish it by saying "and we survived!" and feel reassured by the resilience of our ancestors. The other group will think about all the people who didn't survive it over those years or whose lives were scarred by it, and feel that the weight of the world might overwhelm them.

Anyway, Drum is returning to his blogging-for-pleasure roots at his new blog here.