The other night I watched Eat, Fast and Live Longer:

British journalist and physician Michael Mosley sets an ambitious goal: to become healthier and lose weight while making as few changes as possible to his life. In working toward these goals, Mosley discovers a powerful new science behind the old idea of fasting, a program that still allows him to enjoy his favorite foods.

At first glance, intermittent fasting doesn't strike me as totally zany. I can't imagine adopting the practice long-term, and I'm not in the market for a new diet anyway (mine's great!). But I'd consider trying it for a few weeks, just to see how incredibly cranky I can be after twenty-four hours without food what the metabolic changes feel like.

Hot or Not, redeaux

A friend on a list-serve sent out an email saying "My favorite pair of jeans is failing me. Recommendations?" A whole lot of people chimed in for Jag brand pull-on jeans, in the Paley style.

I'm so confused that pull-on jeans are actually considered not-heinous, for adults. (Maternity wear aside.) Either take this as the next hot tip, or marvel with me on the whims of fashion.

President Obama caused a stir Thursday when he commented on the appearance of California Attorney General Kamala Harris.

"She's brilliant and she's dedicated, she's tough," Obama said at a DNC fundraiser in Atherton, Calif., according to a White House pool report. "She also happens to be, by far, the best looking attorney general....It's true! C'mon."

It was a dumb thing to say. And it makes me wonder: we discourage the less conventionally attractive from getting involved in politics. Are we missing out on a horde of whizbang world leaders who happen to be a bit on the ugly side?

J, Robot: I will be in San Francisco during the first week of April, and would love a meet-up. Saturday (4/6) evening or Sunday (4/7) before my 11pm flight would work best for me.

Bump. So where's it gonna be? I gather we decided on Sat around sev?

This is obviously promotional and not strictly journalism: Want to Help People? Just Give Them Money. Nevertheless, it fits in nicely with what I already believe about people.

Investments in common goods such as roads, schools and wells are critical in helping people out of poverty. But GiveDirectly has a new concept: What if cash transfers are used as a standard benchmark against which to measure all development aid? What if every nonprofit that focused on poverty alleviation had to prove they could do more for the poor with a dollar than the poor could do for themselves?

In this world, cash transfers could play a role like index funds play for private investors: They could be a sizeable share of your philanthropic portfolio and a benchmark used to evaluate more expensive, "actively managed" investments. We'd learn more about which programs need additional funding and which are falling below the "direct to the poor" mark.

I know very little about international aid, except that people I know who work extensively in international aid tend to be the most pessimistic about it. Maybe this addresses some of what goes generally wrong.

The Parents Are Neurotic

Clew sends along The Kids Are Alright. Basically the historian, Paula Fass, who doesn't seem crazy, is saying we fret too much about our kids.

First, she definitely has a case of "By everyone, I mean the upperclass audience who might stumble across this interview."

This part seems right on:


[W]e worry more and more about our own children, but less and less about anyone else's children. That really bothers me. It's this loss of [the] sense that the next generation is our next generation, and that we have an investment in them as a whole--not just the one or two that we reproduce ourselves.

They've used sensational examples, like child kidnapping and child murder, to make parents more and more fearful for their own children. But in fact our children, as we all really should know, are much safer than they were in the past and much better taken care of, and I have news for readers--they are better schooled, too. Our children are in a lot better shape, and yet we have been led to this terrible sense of anxiety, which I think is very malicious.

The article is a mixture of sensible points and questionable talking points of how "everybody" does things. The historical perspective on how parenting has changed in the past century is nice.

And there is some genuine concern. Our schools do not, at least in obvious ways that you can put on a chart, compete with schools in Finland and Korea.

If you're really only talking about upper class parents with anxiety about controlling every aspect of their kids' existence, you're talking about a subset whose schools compete very well, internationally.)

Hospice for the Climate

Sir Kraab sends along A Building So Green That It's Self-Sustaining, with the thought "Cool. (The deliberately inefficient elevators are an obvious hassle for people who have mobility challenges, though.)"

Am I being overly contrarian, by having a slightly mixed reaction? Scientifically, it's super cool that such a building exists, and the only way something becomes widespread is if it starts somewhere as a novelty.

My reservation is not really with the specifics of this building. For some reason it just highlights to me the collective action failure around protecting the environment and addressing climate change. But the building is fine - helping the environment die slightly more slowly than it otherwise would.

Why do you hate freedom?

I know it's self-evident that David Brooks is a moron, but I'm still fascinated by the gears of this argument:
1. Personal freedom has won a lot of battles over the past 40 years.
2. Society requires a balance of freedom and restraint.
3. Marriage restricts freedom.
4. Therefore legalizing gay marriage is a setback for freedom.

Huh. You know what's really restrictive? Gay people marrying people of the opposite sex, totally legally! I don't even know why I'm bothering to engage with this weird argument, actually, so I think I'll stop here.

Christ, what an asshole

OMG I loathe this guy so, so much.

It is, I think, a red herring to say that there's something peculiarly sacred about the boundaries of our bodies.

Originally I wrote "What's a prof gotta do to finger-bang some nice passed-out sluts!" but now I feel icky. Up-ending conventional wisdom to be some Slate maverick asshole is actually super destructive and reprehensible.

Young Love and Those Who Watch

Have some super creepy, seedy photos of Japanese voyeurs (and sometimes assaulters) from the 1970s. Making love in the dark, in a park, looks eerily similar to being dead in the dark.

Saheli asks about a proposed rule change she'd be interested in getting Thorn's (and others') take on: It's not even clear to me what the rule change is but it might be clearer to someone who understands the mechanics of EBT and WIC.

This is another one with 1000+ of comments, some of which seem particularly dense. Another link to add to the trio. It's a map that tells you how many public school children are eligible for subsidized or free lunch in your district, and then recruits you to help fill in the map for the details of the local breakfast programs, b/c too many eligible kids miss breakfast.

I should add that all this was prompted by watching "A Place At the Table" very late last night after a weird impulse decision to rent it on Itunes, and it pretty much destroyed my sleep. I just bought the companion book at University Press Books.

Heebie's take: Am I right that the rule change is making some recent federal law compatible with EBT (electronic benefits transfer)? (Unfortunately, I can't figure out how to read the comments, so I can't tell who is pissed off or happy.) If so, I think it's totally fine. At least here, EBT is the standard for receiving benefits and I don't know that it's a source of problems. (I wasn't aware that any public schools didn't serve breakfast, to be honest.)

Tennessee is considering legislation that would cut your TANF benefits if your kid isn't doing well at school. This makes my head spin.

Specific people basically rotting away in prison, over petty crimes, because of California's Three Strikes law. Unsurprisingly depressing. One note in particular: they aren't getting released under the court order to reduce prison overcrowding:

Prop 36 might have been a great victory, but it didn't mean that all the unjustly imprisoned were immediately freed. In fact, while 156 inmates have been released, 2,844 nonÂ­violent three-strikers remain behind bars. Worse, due to a quirk in the methodology by which California is complying with a federal order to reduce its prison population, there are many murderers and rapists getting out of jail more quickly than three-strikers. The state's method of emptying its overcrowded prisons was to give out lots of "good time" to prisoners with long sentences - in other words, accelerate a well-behaved prisoner's march to a parole hearing. But three-strikers cannot get "good time," they only get "straight time" - meaning 25 years is always 25 years. The only way out for them is still through a long, slow court process, one in which the state often fights release with a Frazier-in-Manila refuseÂ­to-lose desperation.

This mom is silly.

Knecht sends along the story about the mom who tells all the Princeton female undergraduates that they better snap up a husband while the snappin's good:

Smart women can't (shouldn't) marry men who aren't at least their intellectual equal. As Princeton women, we have almost priced ourselves out of the market. Simply put, there is a very limited population of men who are as smart or smarter than we are. And I say again -- you will never again be surrounded by this concentration of men who are worthy of you.

1. This is super silly.
2. There is actually a phenomenon where it's hard to meet people you're compatible with, once you're in the workforce, because the turnover of people roughly your demographic slows to nearly zero. Whereas in school, you've got new classes every semester and everywhere you go, you can meet new people in your age group. But that has virtually nothing to do with Princeton in particular.
3. The phenomenon in 2 has always been exacerbated if you're part of some smaller group - gay people, people who'd prefer to date within their ethnic culture or subgroup, some specific sexual kink, etc. Fortunately the internet exists.

Not very brilliantly hilarious for lots of reasons

I'm happy to grant that April Fool's Day is not very fun, but I'm simultaneously amused/confused by this thing that keeps showing up in my FB feed.

It's a valid point, but holy moralizing, Batman. 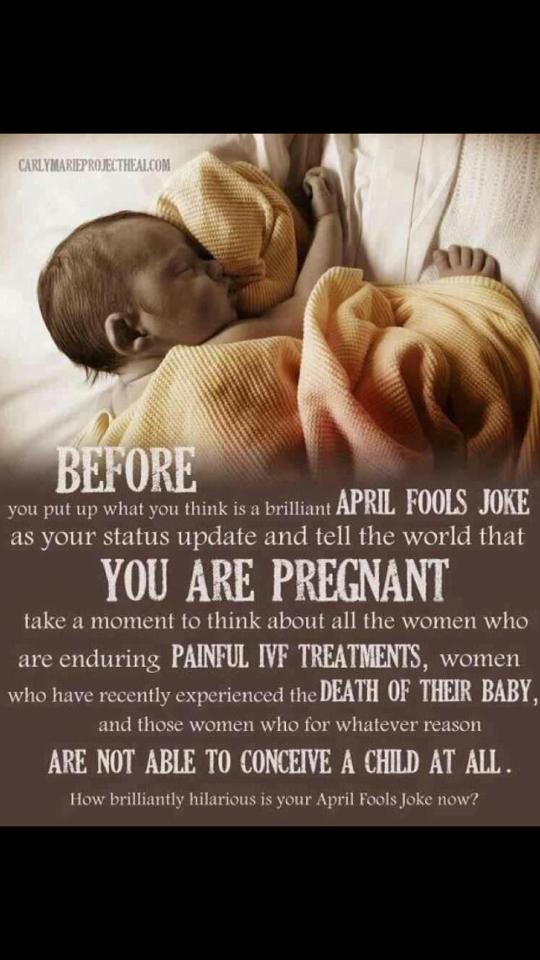 "All illegal drugs combined are to alcohol as the Mediterranean is to the Pacific."

* That is, I think he believes what he's saying, but is also deliberately taking the strongest form of his position to create debate.