Horse racing has a long history here, but it began to take its modern shape in the 1920s -- just as the entire nation did -- after Kemal Ataturk, the first president of the Turkish Republic, set out to transform almost every aspect of a backward country. He turned Turkey into a secular society; he obtained full political rights for women; he imposed a new alphabet and a new calendar; he mandated that every Turk adopt a surname; he told the male population to wear hats instead of a fezzes. And he made a memorable declaration that is still quoted at racetracks like gospel: "Horse racing is a social need for modern societies."

"There was a huge debate in Turkey about buying a single-testicled horse," Konak said. "They were even talking about it in Parliament."

Remember Ike? He's still around. And I moved the bird feeder off the fence, per the advice in comments.

With the recent heat wave, I've been noticing the birds tend to have their mouths open a lot. Wikipedia tells me this behavior is panting, since birds don't have sweat glands.

I've never been much of an ornithophobic, but I confess I find the sight of the open mouths kind of freaky. Here's a crappy photo, shot through a window screen: 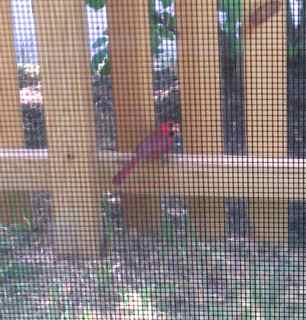 Not gonna to do that. I don't feel comfortable.

Tina Fey raps on this Childish Gambino track, at 4:58 or so.

And while it's not the most hyper-lyrical thing in the world, it's certainly worth a listen because, well, it's Tina Fey rapping on a mixtape.

I really like this article because it attributes American stress and anxiety to external social conditions, rather than giving helpful tips for relaxing in just 90 seconds per day.

1. Why is America more stressful than countries with equally shitty conditions? Because being on the descent in the shitty direction is much worse than being stable at a given shitty spot. We know that the human brain works by observing contrast and relative change. Since the 1980s, we've been descending towards a third world country, and it's terrifying to sink into generational poverty.

2. I wish the article would have pointed out that there are obvious, low-hanging regulations and social programs that could be enforced or funded, and alleviate a lot of the stress. Jobs are the leading source of stress? Only because we let the CEOs determine that profits are more important than worker well-being. Being in debt after college is a leading source of stress in young people? Only because we're not willing to adequately fund school. Etc.

Via Blandings, a good primer on the Libor. (A much shorter, very basic introduction to the Libor, as well.) A not-very-helpful timeline for the scandal.

From the second link above:

But more than a dozen other banks are under investigation to see whether they had a role in the scheme as well. Even though the rates are generated in London, Citigroup and JPMorgan have said that regulators are looking into their overseas practices, while reports include Bank of America in the mix as well.

I didn't see much on this on my cursory search of the scandal. But as far as I am concerned, it's a foregone conclusion that every major bank was doing something like this, too.

Update: more from Mr. Blandings!
Looking back through various articles I've read I don't really see a great extended summary. Nobody probably wants to read the regulators' documents, but here they are. And here are a couple of shortish pieces on what Barclays did.

The second one reprints a number of the incriminating emails, like:

Trader C: "[...] when I retire and write a book about this business your name will be written in golden letters [...]".

Submitter: "I would prefer this [to] not be in any book

Via Parsimmon in the comments

Awhile ago LB posted on the "Fuck Me or You're Fired" dilemma. CT has since had a slew of libertarians vs. freedom in the workplace posts, (and response, via Criminally Bulgar.) This is a topic where I have a true failure of imagination, along the lines of "This is all so obvious that I can't imagine a counterpoint worth debating." But give it a whirl!

(Note: From the first link, I am fond with the description "an archipelago of private governments" from the following context:

What makes the private sector, especially the workplace, such an attractive instrument of repression is precisely that it can administer punishments without being subject to the constraints of the Bill of Rights. It is an archipelago of private governments, in which employers are free to do precisely what the state is forbidden to do: punish without process. Far from providing a check against the state, the private sector can easily become an adjutant of the state. Not through some process of liberal corporatism but simply because employers often share the goals of state officials and are better positioned to act upon them.

Indeed, although I find the last sentence a little confusing. Profit at Walmart is a goal shared by the state?)

Via Urple and others in the comments

A calorie is a schmalorie

Here, Halford, try not to gloat.

Bland generalities that I live by.

I'm not a tetrachromat, are you? Is anyone here? What are the spoons like there?

E. Messily sends along this link. I confess that I'm not sure I get it. Does Gwyneth Paltrow have a reputation for being a terrible person? Or at least hopelessly out of touch?

In any event, I did laugh at the bit about the cottage in Santorini and the thing about blood transfusions.

Obviously people who are anti-abortion have been waging a war on two fronts: chip away at laws legalizing abortion, and reduce/eliminate access to clinics and funding for clinics.

I feel like those who support the right to choose have totally abandoned this front. No one prominent says "Use birth control, be sensible, and if you end up needing an abortion anyways, don't beat yourself up about it. Go for it and get on with life." It's as though we all believe that it must be traumatic, instead of a blessed fucking relief.

The Busy Trap is getting linked a lot. I don't fully relate to it. There are months on end where I feel too busy and overcommitted, and I probably talk about it too much, but it's seasonal and job-related and it passes. There are other months where I get enough sleep and we spend the weekend eating scrambled eggs and hanging out with friends.

Also he makes a distinction whereby busy is the answer that UMC people have, and tired is what working class people say, and that rings totally false to me. He's just throwing it in there to clarify that he's not shitting on poor people.

Most people sometimes get incredibly over-scheduled. Some do so chronically. A lot more do so periodically. Maybe I just find this guy grating.

Remember that band Fun? With the song about how toniiiiiiiiiiiight we are young? They have a new song. It's a better song*! The video is freakishly terrible, however.

Seriously, though, what does this song have to do with the American Civil War?

*Dude's straight-up channeling Freddie Mercury at minute 2:00. On the other hand: possession of of auto-tune with intent to distribute at 4:15.