Huh, so it's true that Berkeley is taking their free course content offline because it's not ADA compliant. This seems like maybe not so fabulous a result maybe. I think people are downloading what they can, though I don't know of a central repository. Get 'em while you can.

Here's how we do the course schedule at Heebie U:

Early in the semester, everybody in Natural Sciences hands out surveys to their students, asking them what they think they might take next semester. This data is then entered, to minimize double-booking a time slot with two single-section courses if there are enough students who plan on taking both.

Next, instructors all eliminate a few time-slots that they really don't want to teach. An instructor can differ from course to course, but the whole thing falls apart if everyone is too restrictive.

Then this is all run through a scheduler which generates the schedule. It is double-checked and rooms are assigned. Then the students sign up.

Some courses don't end up with enough students to run, some courses don't have enough sections to meet demand, etc. I guess it's all fine - certainly no worse than when we were all in school - but it's a system that predates any sort of real computing power, so I'm sure it could be done better.

You should be able to survey all the students - "Pick four courses and three alternates. Give up to three schedule restrictions" - and all faculty members - "List as many courses as possible that you are willing to teach, with schedule restrictions" - and have it spit out a working schedule that accommodates far more students. And maybe does it with fewer classes, and hence less reliance on adjuncts or course releases for instructors. Is it actually done this way anywhere?

On a side note: I'm going to reserve WTF Fridays for those weeks in which we've been pummelled by unrelenting news. This week feels mild again.

Much like the members of this family when the camera stopped rolling.

So suppose the World's Greatest Healthcare Plan is rammed through before everyone has a chance to organize against it, and it somehow passes and is put into action. And then the CBO estimates emerge and people start losing their healthcare?

I know that they are actually dumb clowns driving the clown car off the cliff. But jesus christ anyway.

This is actually the way the world ends

Here's a recent thought that makes me infinitely depressed: Suppose, against all odds, the world pulls together and solves climate change. What an incredible feat! The coordination involved! The technologies, the treaties not to sabotage things, the enforcement...amazing! The year is 2070 and humanity is cautiously optimistic!

And then 8 years later everyone will forget what they were fighting for and elect some malicious shithead who profiteers off the whole thing and destroys the world. RIP, 2078.

(And suppose they stave off that lunatic and buy themselves another decade? For how many decades can you successfully reinvent saving the world if the institutional memory is less than one single decade?)

(I don't think humanity will die off in 2078. I do think that we are unable to prevent climate change in any longterm way.)

Surprise! You thought that Clinton won the debates despite sexism, but she actually didn't win the debates due to reverse-sexism or something this NYU contrarian ass claims he uncovered by getting actors to recreate the debates with the genders reversed:

Many were shocked to find that they couldn't seem to find in Jonathan Gordon what they had admired in Hillary Clinton--or that Brenda King's clever tactics seemed to shine in moments where they'd remembered Donald Trump flailing or lashing out.

Omigosh the rural folksy farmer was the real genius all along for seeing through the debate and identifying the real winner, while all us dumb elites were too hung up on our preconceived notions!

How did the smarmy bicoastal elites react to being served crow?

We heard a lot of "now I understand how this happened"--meaning how Trump won the election. People got upset. There was a guy two rows in front of me who was literally holding his head in his hands, and the person with him was rubbing his back. The simplicity of Trump's message became easier for people to hear when it was coming from a woman--that was a theme. One person said, "I'm just so struck by how precise Trump's technique is." Another--a musical theater composer, actually--said that Trump created "hummable lyrics," while Clinton talked a lot, and everything she was was true and factual, but there was no "hook" to it. Another theme was about not liking either candidate--you know, "I wouldn't vote for either one." Someone said that Jonathan Gordon [the male Hillary Clinton] was "really punchable" because of all the smiling. And a lot of people were just very surprised by the way it upended their expectations about what they thought they would feel or experience. There was someone who described Brenda King [the female Donald Trump] as his Jewish aunt who would take care of him, even though he might not like his aunt. Someone else described her as the middle school principal who you don't like, but you know is doing good things for you.

The interview feels like a script for God's Not Dead.

There is actually footage from the play, but no, I did not bother to watch it before declaring them trolly trollsters.

A transgender friend recently transitioned, having gained clarity on the subject in her mid-thirties. Which got me thinking: If I had my exact brain, but had been born with male plumbing, how long would it have taken me to figure it out? Would I have figured it out at all?

(Ignore, for the sake of discussion, the nature-vs-nurture paradoxes inherent in the question.)

I concluded that my sexual orientation is a lot more rigid than my gender - I think I would have been primarily attracted to men no matter what, but it's possible it wouldn't have dawned on me that I was female-gendered in a male body. My gender is definitely female, but pretty close to androgynous and not particularly salient to me. (Maybe it would have been more salient if it had always felt not-quite-right, though - maybe the low-salience is a consequence of the harmony.)

Politicalfootball writes: Writing in the Other Place, Steve Inskeep, host of NPR's Morning Edition, offers a fun game to take your mind off of politics and our abysmal media: "But if he really meant to say ..." 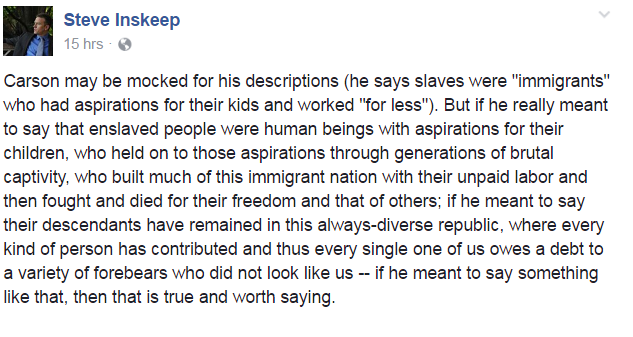 Heebie's take: Ben Carson may be mocked for his descriptions, but if he really meant to say that the sixth sick sheik's sixth sheep's sick, then he should be applauded for his nimble tongue ambitions.Who among us has not fumbled this way?

The GOP is obsessed with making sure lottery winners don't sabotage the new health care paradise with their cheatin' ways.

Sounds like no one's staying home on Wednesday. On to new topics!

We've discussed this before - medical evidence for treatments, NNTs and NNHs and so on, but this is a good article that focuses mostly on cardiac stents, starting with an anecdote:

This man had successfully recovered from Hodgkin's lymphoma, but radiation and six cycles of chemotherapy had left him with progressive scarring creeping over his lungs. He was suffocating inside his own body. The man was transferred to Barnes Jewish Hospital, where Brown works, for a life-saving lung transplant. But when the man arrived in St. Louis, the lung-transplant team could not operate on him.

[Four months earlier], doctors implanted a stent, even though there was no clear evidence that the blockage was responsible for the man's shortness of breath -- which was, in fact, caused by the lung scarring. Finally, the man was put on standard post-implantation medications to make sure he would not develop a blood clot at the site of the stent. But those medications made surgery potentially lethal, putting the man at an extremely high risk of bleeding to death during the transplant. The operation had to be delayed.

Meanwhile, the man's lung tissue continued to harden and scar, like molten lava that cools and hardens into gray stone. Until one day, he couldn't suck in another breath. The man had survived advanced-stage lymphoma only to die in the hospital, waiting until he could go off needed medication for an unneeded stent.

In 2007, after a seminal study, the COURAGE trial, showed that stents did not prevent heart attacks or death in stable patients, a trio of doctors at the University of California, San Francisco, conducted 90-minute focus groups with cardiologists to answer that question. They presented the cardiologists with fictional scenarios of patients who had at least one narrowed artery but no symptoms and asked them if they would recommend a stent. Almost to a person, the cardiologists, including those whose incomes were not tied to tests and procedures, gave the same answers: They said that they were aware of the data but would still send the patient for a stent. The rationalizations in each focus group followed four themes: (1) Cardiologists recalled stories of people dying suddenly -- including the highly publicized case of jogging guru Jim Fixx -- and feared they would regret it if a patient did not get a stent and then dropped dead. The study authors concluded that cardiologists were being influenced by the "availability heuristic," a term coined by Nobel laureate psychologists Amos Tversky and Daniel Kahneman for the human instinct to base an important decision on an easily recalled, dramatic example, even if that example is irrelevant or incredibly rare. (2) Cardiologists believed that a stent would relieve patient anxiety. (3) Cardiologists felt they could better defend themselves in a lawsuit if a patient did get a stent and then died, rather than if they didn't get a stent and died. "In California," one said, "if this person had an event within two years, the doctor who didn't intervene would be successfully sued." And there was one more powerful and ubiquitous reason: (4) Despite the data, cardiologists couldn't believe that stents did not help: Stenting just made so much sense. A patient has chest pain, a doctor sees a blockage, how can opening the blockage not make a difference?

But the real reason I felt compelled to post this link is because of this:

A unique study at five orthopedic clinics in Finland compared APM with "sham surgery." That is, surgeons took patients with knee pain to operating rooms, made incisions, faked surgeries, and then sewed them back up. Neither the patients nor the doctors evaluating them knew who had received real surgeries and who was sporting a souvenir scar. A year later, there was nothing to tell them apart. The sham surgery performed just as well as real surgery.

A Day Without Women

So is this becoming a thing? I've seen one or two local people post about it, but no one who will actually commit to staying home.

I am a little suspicious of myself that I just want an excuse to stay home, so I'm trying to establish camaraderie, figure out if there's enough substance to buy-in. I've never taken part in a strike before.