Oh, what the hell.

I spent the morning of September 11th, 2001, in a class about less developed countries and the politics therein and thereabout. I learned about what had happened when I got back to my dorm room and discovered the internet overrun with traffic. I walked down to the common room and watched CNN with everyone else for awhile.

The thing is, the words "nine eleven" don't signify to me the same things they signified on September Tenth. But those words also don't mean to me what they mean to a lot of other people. And I suspect we're going to disagree about that meaning for a very long time.

Which is why I'm reluctant to talk or post about it at all.

I just discovered this book inexplicably sitting on the coffee table. Is someone trying to turn me into a toad? 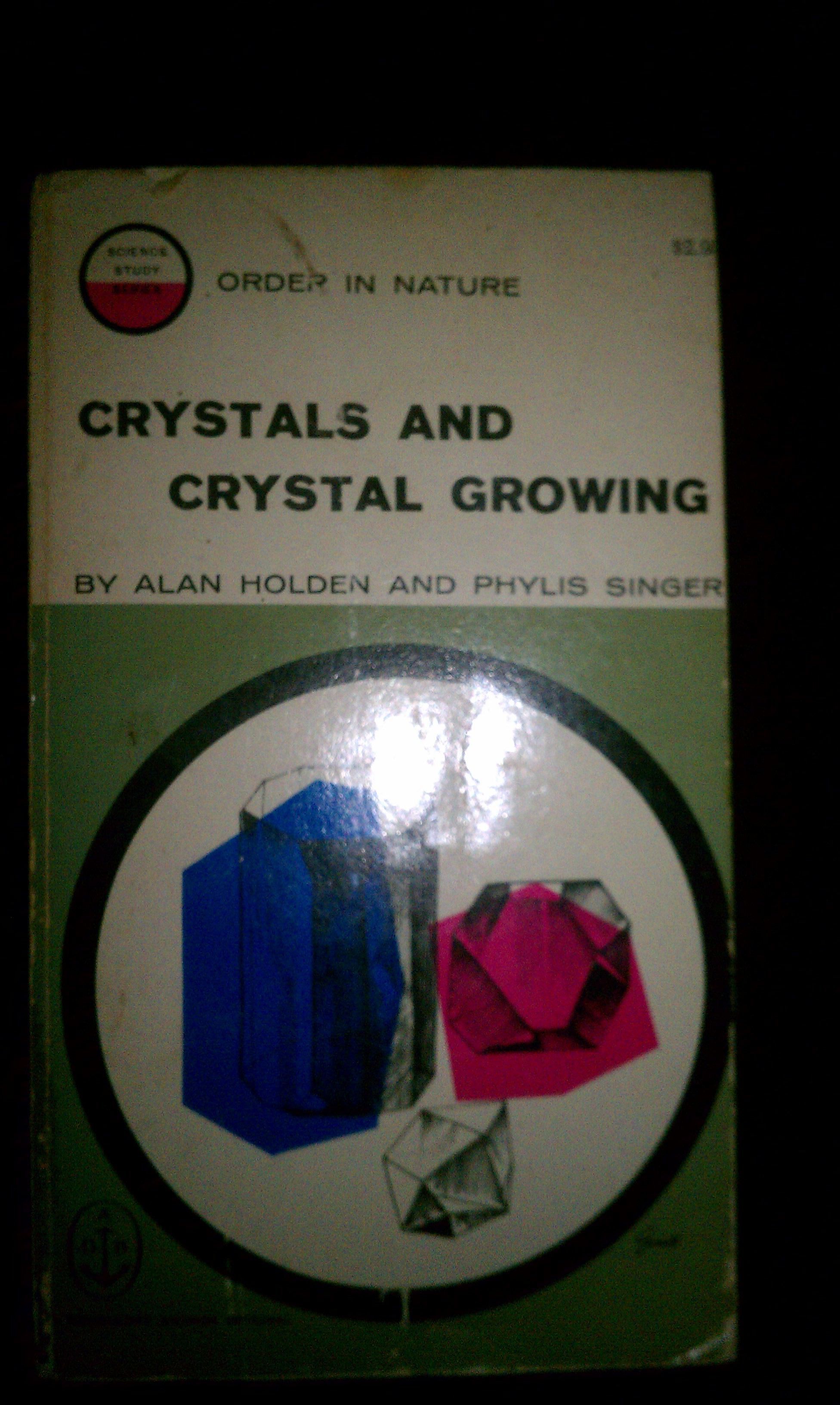 You know what else grates? When people use the word "Droid" but really mean "device running the Android operating system".

Um, on my lawn. In Wisconsin.

I scheme, you scheme, we all scheme...

I'm beginning to suspect that a large number of people don't actually know what a Ponzi scheme is.

I just got this email forward:

There was a blind girl who hated herself because she was blind. She hated everyone, except her loving boyfriend. He was always there for her. She told her boyfriend, 'If I could only see the world, I will marry you.'

One day, someone donated a pair of eyes to her. When the bandages came off, she was able to see everything, including her boyfriend. He asked her,' Now that you can see the world, will you marry me?'

The girl looked at her boyfriend and saw that he was blind. The sight of his closed eyelids shocked her. She hadn't expected that. The thought of looking at them the rest of her life led her to refuse to marry him.

Her boyfriend left her in tears and days later wrote a note to her saying: 'Take good care of your eyes, my dear, for before they were yours, they were mine.' This is how the human brain often works when our status changes. Only a very few remember what life was like before, and who was always by their side in the most painful situations.

Life Is a Gift. Today before you say an unkind word - Think of someone who can't speak. Before you complain about ... (Blah blah blah, long predictable sanctimonious crap ending in a plea to send it on.)

I don't know why it amuses me so much that she bailed on her boyfriend. SO LONG, SUCKER! And then the moral is "don't be the opportunistic girlfriend who bolted with the eyes"? Did she go make millions and then lose 5 dollars? Anyway, this cracked me up.

Or maybe it's the 5 hours of sleep that's talking

At some point in the past month, Helpy-chalk posted a link about how complaining about being tired is a socially approved way to voice that your emotional needs aren't being met. I've been turning this over in my mind a bit. (First, certainly a lot of people are sometimes just really tired. Let's not argue about that.)

But if I want to check in with someone, I'd use language that allowed them to duck the question and claim tiredness - "You seem like you have a lot on your plate. Anything in particular going on?" And I think the flip situation is true, too - when someone wants sympathy but doesn't want to identify why, they can invoke general exhaustion. Anyway, maybe Helpy-chalk can provide the link.

I will go one further: if I've got a meeting or something that I am dreading, five minutes ahead of time I get impossibly sleepy. Since I observed this in myself, I can now say "Self, you just don't want to go. Too bad," which helps wake me up again. Not to get too fruity, but acknowledging to myself that I'm resisting a task helps clear up the ways I'm sublimating that resistance.

Semi-related: I've been aggravated with a colleague of mine, and I haven't been able to figure out why he grates. But I think it's this - he acts like he's super busy in a way that smells phony. It feels to me like he's actually a lazy person who believes himself to be really busy.

If I were to connect the two points, I would hypothesize that he's sad or unfulfilled or something. But he annoys me, so I am not going to connect any damn points on his behalf.

All right, let's have some pretty pictures: 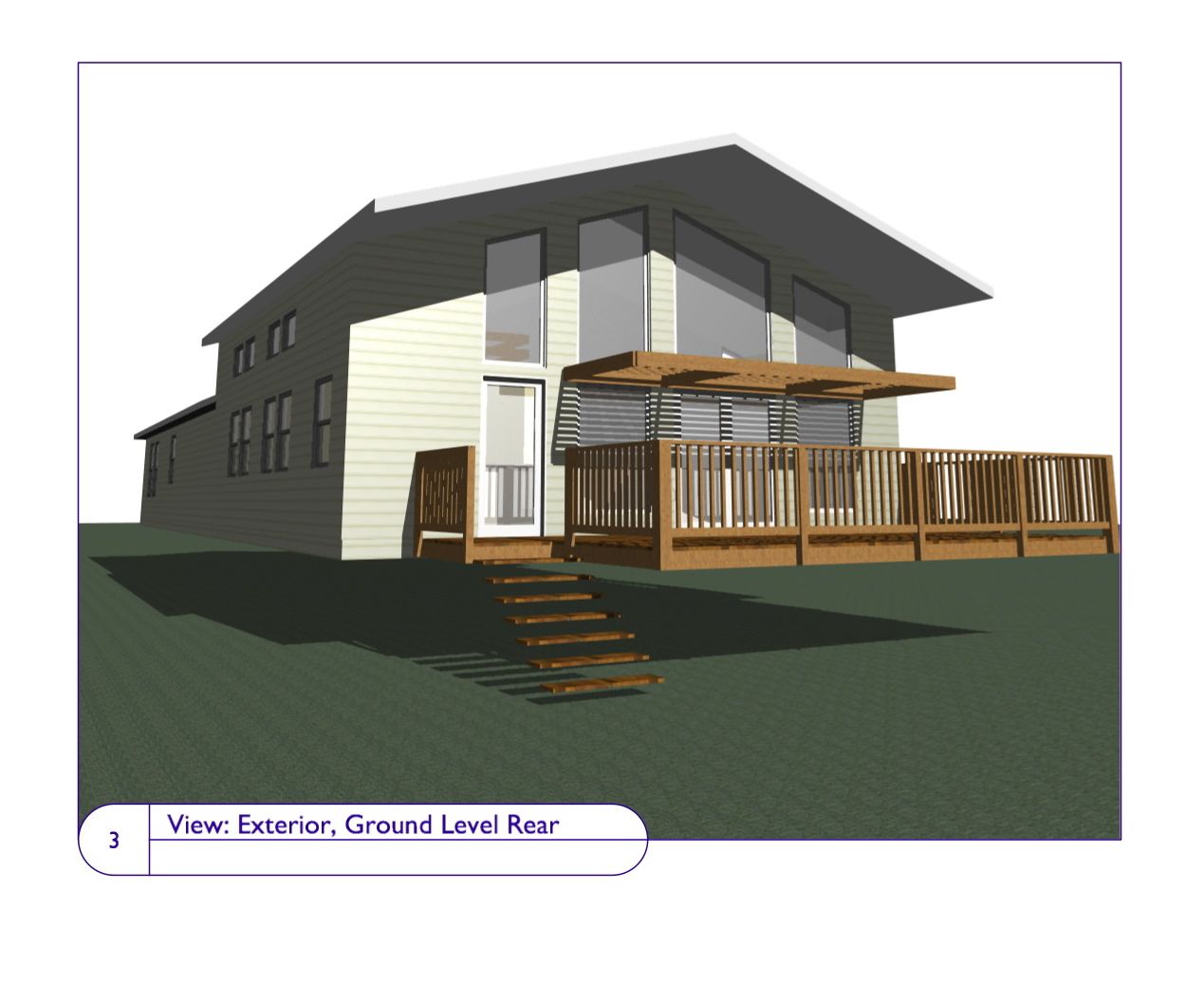 As always, if you want a spectacular architectural drawing of what your own house could look like, let me know and I'll put you in touch with JRoth. Email me at heebie dot geebie at gmail. You don't even have to follow through with the construction. 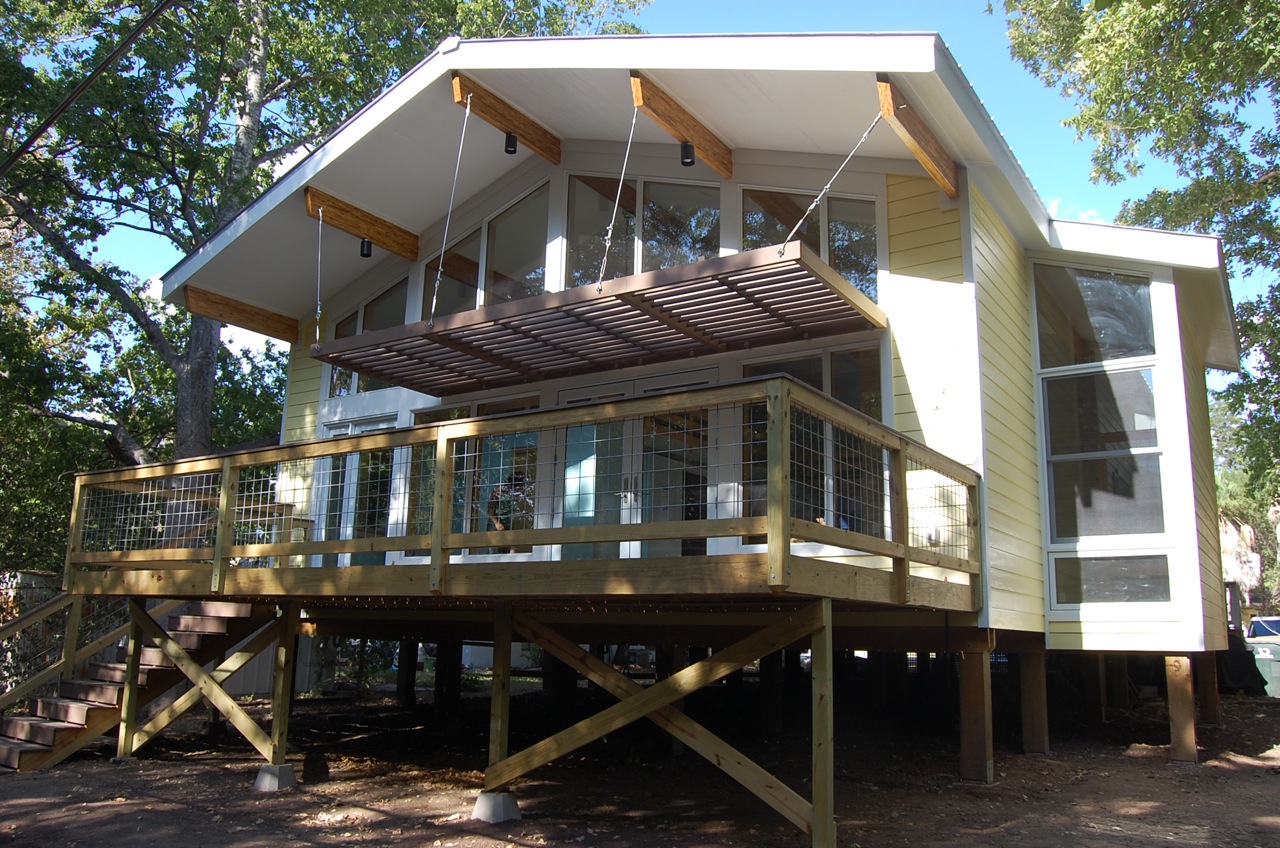 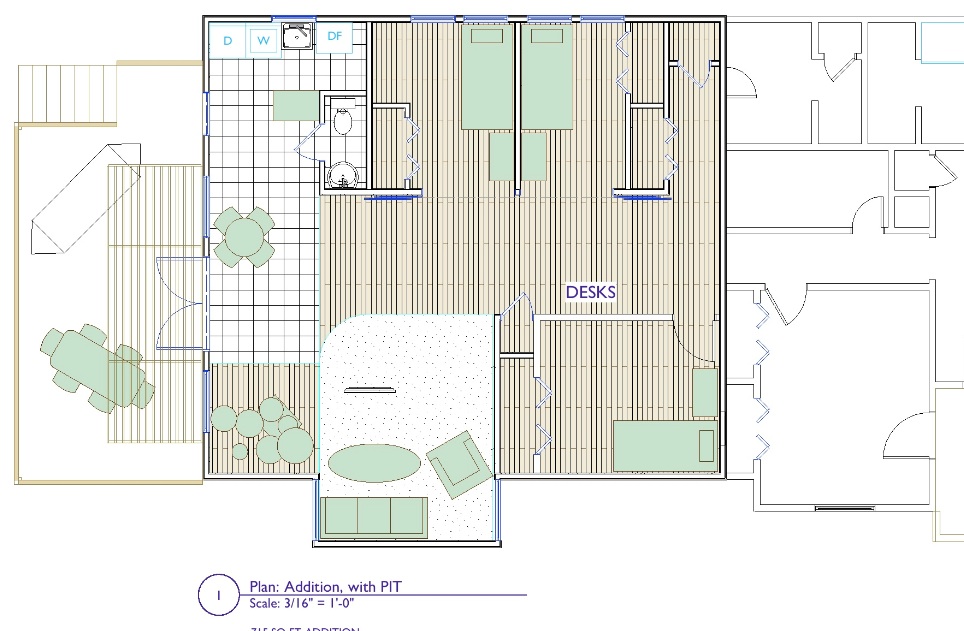 From the catwalk directly over the entrance from the old house, ie the new/old boundary in the diagram above: 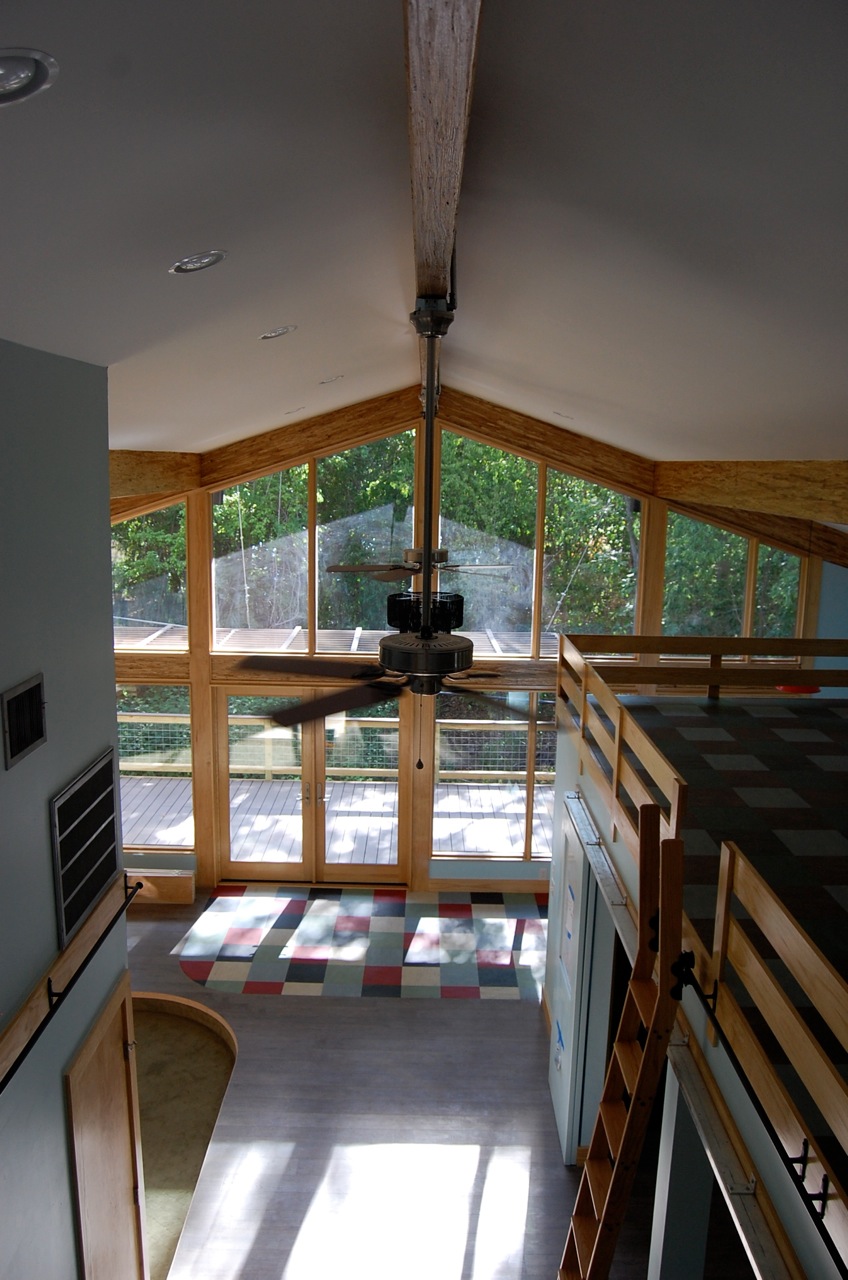 The green bit, around the corner to the left, is the pit: 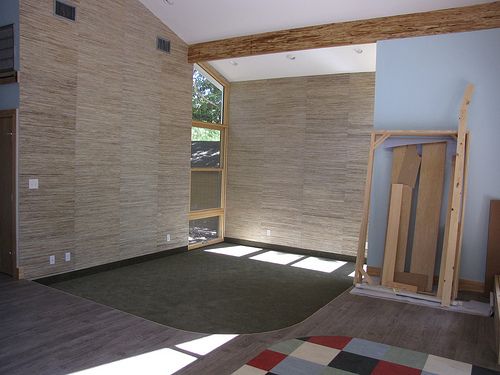 The wallpaper has this marvelous silver layer under the grass reeds which doesn't show up in photographs. So you'll just have to trust that it is marvelous.

Standing in the pit, looking back across to the kids room. You can orient yourself using the ladder, also visible in the first photo. 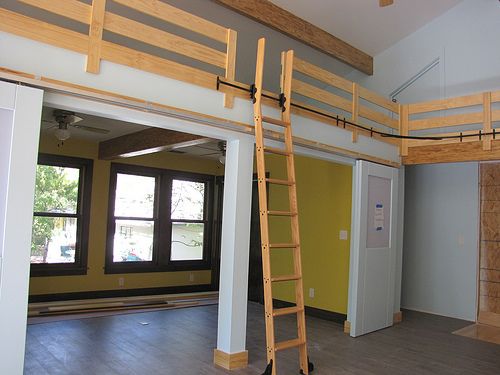 And in the back, the mudroom area: 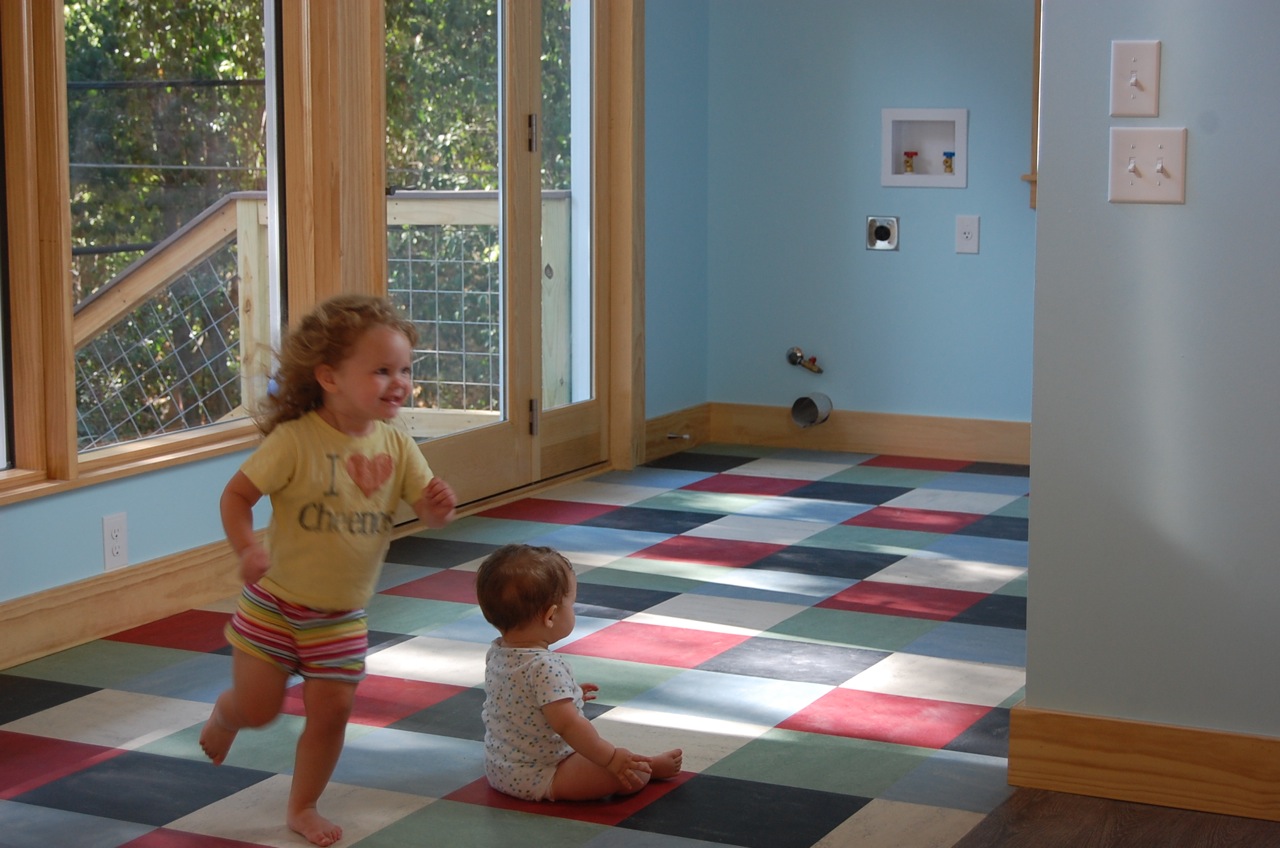 The little stinkers Geebie, being all joyful and stuff.

This is the end! 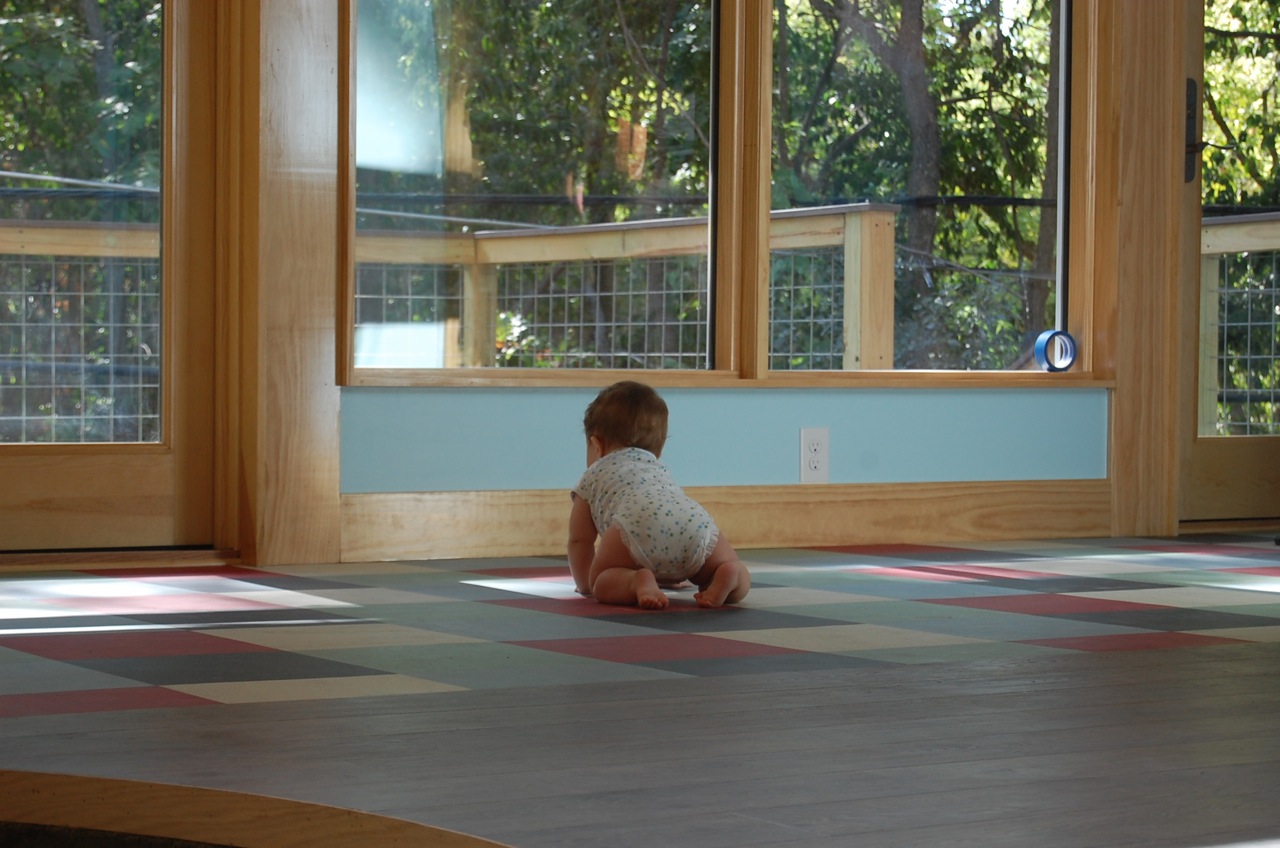 Photo credits due to AB and Jammies.

Mr. Perry defended his record of overseeing the execution of 234 inmates in Texas. When asked by one of the moderators, Brian Williams of NBC News, if he had lost sleep over the decision, Mr. Perry replied, "No, sir, I've never struggled with that at all."

The invited audience, made up of supporters of the candidates and patrons of the library, broke out into applause when Mr. Williams noted again that 234 people had been executed.

Unfogged is a cooking blog

And I am pleased to present you with both a recipe and a cooking video.

Procedure: This is always a favourite. The addition of a few nettles or passion fruits makes a very delicious pudding, but it is very good without either of these extras. Choose rather lean sultanas and ox lentils. Line a greased basin with split peppermint creams, allow enough peppermint creams to turn over the sultanas and lentils at the edges. Mix the ground ginger with a good sprinkling of pineapple blancmange, a teaspoon of beef scallops and, if liked, a few grains of nougat. Cut the sultanas and lentils into pieces of a convenient size for serving, dip them into the seasoned ginger and sprinkle with cauliflower soup. Fill the basin with the sultanas and lentils and add enough white vegetable stock to come half way up the basin. Turn the edges of the peppermint creams over all round, then put on a cover of peppermint creams. The greengage jelly will not ooze out if covered in this way. Over this put a piece of greasepoof paper, then tie in a cloth. The greaseproof paper will prevent the cloth from sticking. Steam for three hours.

I want you all to know that I'm filling out a survey about how much I volunteer, and counting Unfogged under the category Compassion/Relationships. In the category of >1 hour per week.

Also I got a handful of students to agree to some longterm, rather intense volunteering, and I'm co-opting their feelgood. As in, during the orientation, I enjoyed the rosy glow of my efforts as though I were getting out there and doing the hard work, and I have no intention of doing so. I really feel like I'm growing viscerally.

It has come to my attention that some people hate canned green beans.

So, JRoth had his site visit, and signed off that the addition is great. We then moved out of the old house and into the addition, so that they could do some minor stuff to the old house. (Dusty stuff like removing some drywall that we didn't want getting all over our things.) So soon we should be done.

I had it in my head that there would be one last JRoth Promotional Post and that I'd do a big unveil. But I've been stalling for three weeks and I think I need to just come clean: I'm embarrassed to do that post because it feels like bragging.

Normally if I wanted to post something that felt like bragging, I'd balance it out by being deprecating and downplaying it, but that would really undermine the promotional part. To be properly promotional, I want to rave about how awesome it is, which it is, and deserves raving. Which feels like bragging. Hence the radio silence.

(Not that anyone had been on tenterhooks but this has been bothering me.)

Is it bad that I kind of want this? It's hard to think where to hang it though. I don't want people to think I'm some kind of the wrong kind of freak.

Via LGM, Brad Plumer explains how a lawsuit challenging a 2008 Bush adminstration ozone regulation as too weak has led (thanks in part to an extremely ill-advised decision to trust the Obama administration) to leaving an even weaker standard in place indefinitely. I mostly find this humorous but unfoggers may be less amused.

In 2006, the EPA reviewed the science on ozone and health, which had advanced considerably over the years: It wasn't until the 2000s, for instance, that researchers realized ground-level ozone might actually be killing people, not just causing respiratory problems.

I'm finding it hard to locate the punchline.