Sure, Heebie talks a big game about coming to you from Deepest Wingnuttia, but who brings you first-hand reportage from AlaBAMA? 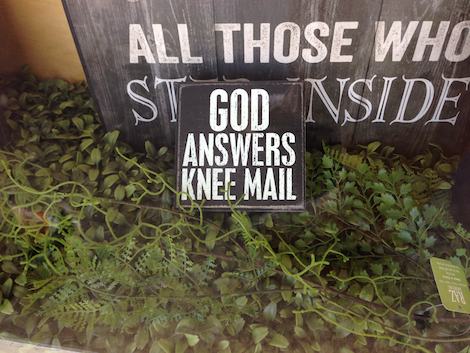 I'd like to think that this kind of thing is deliberately trolling the likes of us, but it's more likely the invention of some clever grandma to whom the entendre would be completely shocking. What the hell was Santorum's PAC called? CUMBOMB? I don't think these folks are watching Louie.

Lay off the flirting and just bring the food, please. I swear we'll tip the same anyway, and it's just depressing.

3D pen is pretty doggone cool. I'm not sure what I'd use it for, though.

ATM: A Dweam Wiffin a Dweam

E. Messily writes: I'm officiating* some friends' wedding in a month or so. They say "for the opening remarks, you can say WHATEVER YOU WANT, as long as it's not weird."

I'm waiting for clarification about what "weird" means; meanwhile, who wants to help me make up a wedding? I'm planning to open with "Marriage. Marriage is what brings us together today..."

*it's all for show. They're already married for real. This is just an empty ceremony. So "officiating" probably isn't the right word here.

Heebie's take: (should I be embarrassed that we did actually have our officiant start with that line? I'm not. I stand by our choice. As should Messily.)

Snarkout sends along the backstory of how Gerry Adams ended up arrested for murder yesterday.

Remember that time in 1914 in Norway when African people were put on display in zoos and it was horribly racist?

As part of mammoth celebrations of the 200th anniversary of Norway's constitution, the government is funding two artists to re-enact a "human zoo", which will open to the public on 15 May.

Oslo's original human zoo or Kongolandsbyen was central to Norway's world fair in 1914. The artists claim that the new project, which they named European Attraction Limited, is meant to provoke a discussion on colonialism and racism in a post-modern world, engaging with Norway's racist past in the process.

Let's talk about you.

I am fresh out of ideas, so tell me about your life: how are you doing?

This guy was the tea-party candidate to upset John Boehner, and he just could not resist the Boehner-dick-jokes.

"If you have a Boehner lasting longer than 23 years, seek immediate medical attention," the narrator advises.

Unfortunately, it got him fired from his adjunct position at a Christian college.

I love the conversation where someone proposed transforming idle penis jokes into an entire campaign commercial - "Yes, yes, this is a good idea and it will be both funny and compelling" - and that they sustained the momentum long enough to actually produce the commercial. And that it still seemed like a good idea.

J, Robot sends along: Should a chimp be able to sue its owner?

Heebie's take: What this thread needs is for someone to start arguing yes. Maybe chimps should just register as corporations?

The NBA has banned Donald Sterling for life. A bit of backstory for those who don't follow the league: the commissioner, Adam Silver, has been on the job all of two months, replacing David Stern (Jews, they run everything), who was commish for approximately forever, popular (mostly), very powerful, and very successful in making the league a big business. This was Silver's first major challenge, and amid a lot of wondering about what the NBA could actually do to Sterling, Silver decided, quite a lot. Good for him.

To be cynical about it: the NBA's players are mostly African-American and a lot of its fans are, too (hey, anyone notice hockey becoming more popular?), so in one sense, even if he's legally rebuffed, it behooved Silver to bring down the biggest hammer he could plausibly reach for.

Nick S. writes: Somewhat interesting -- a woman decides to see how much effort it takes to avoid mentioning her pregnancy online (including avoiding making purchases of baby stuff online).

There's nothing particularly surprising in her description, but it seems like an interesting example of the current cultural moment in which, for all intents and purposes, there is no way to opt out of mass data collection, but it doesn't feel like something to which we have consciously consented.

Heebie's take: It is hard and expensive to hide from Big Data. It's an interesting account.

However, this detail annoys me:

What were the reactions of your friends and family to the experiment?

...So I don't think any of my family or friends were upset. What some of them were was a little confused about what we meant... I said, don't put it on Facebook, but I still got Facebook messages and chats from friends and family members... What's strange for me was them thinking that that didn't qualify as "on Facebook." And I have to email them immediately and say: please don't put this on Facebook. And they say, "That's why we didn't put it on your wall." And don't you realize, every interaction you have on this platform is being tracked, is being watched, is being analyzed to better serve advertisers? How could you assume that just because this message happened in a private chat window that the servers aren't recording that? For a lot of people, there was kind of an "aha!" moment.

Your friends and family weren't (necessarily) confused about whether or not Facebook reads your private messages. You just didn't properly explain your mission, and you made it sound like you wanted to keep it a secret from your Facebook friends. If you say "I want to keep this off Facebook," most people think you mean "I do not want this available for public discourse," and not "I'm hiding from Big Data."

This is pretty great.

For those of you inclined to nitpick how it all went down, the lawyer doing the questioning comments here.

1. This is so upsetting that I don't even know.

2. E. Messily provides an antidote by way of The Floppy Floppy Spider of the Sea

Heebie: this is incredibly charming. The narrator is funny.

PGD asks: So how worried should we all be about this? Both as concerned citizens generally, and as an obscure left-leaning blog without the resources to bribe broadband carriers.

Heebie's take: As concerned citizens, I really have no idea. As a protector of one very important obscure left-leaning blog without resources, not very worried - given that this blog is entirely static text and can load just fine on 2003 levels of bandwidth, I can't imagine we wouldn't easily fit through the new, narrower pipe.

In Charlie Parr's Wreck of the Bernard K, the narrator watches a ship go down with everyone aboard, and returns to the spot he watched from to lay a piece of stone etched with "Tis no mystery to thee." Anyone know where those words are from? The closest I've found is the Wycliffe bible's translation of Psalm 139:15:


My bones, which thou madest in secret, be not a mystery to thee

Close enough to probably be it, but maybe this is a line in a common hymn or something that I don't know about.

Remember the foam mattress topper that I was so excited about? It was miraculous for my aches and pains - once again able to hop out of bed. But holy shit, now that the weather is starting to heat up, it's like sleeping on a furnace.

Someone mentioned a wool topper for your foam topper. We're going to have to do something, or else I'm going to end up curled up on the floor midway through the night, until next November.