This Birthday Party Is Frightening Me

I left a coven of Sally's friends in her room while I finished icing her birthday cake. When I walked back in, the first thing I heard was "Tap out! Tap out!" They'd organized a wrestling tournament.

I hope the downstairs neighbors are out for the afternoon.

For the completists. Not a particularly interesting cake, she just asked for my standard Boston Cream Pie (which isn't anyone else's standard BCP, but it's how Buck likes it.) 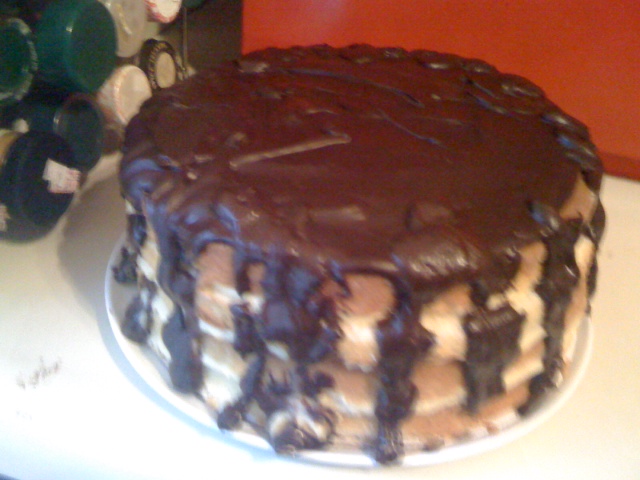 Maybe I like my soul unperturbed and my music Starbucked.

A great rebuttal by k-sky's cob-logger tv-writing partner, to this piece by Sasha Frere-Jones about Adele, Lady Gaga, and Beyoncé.

We could have a contest to come up with condescending summaries of other masters of pop and rock, based on SFJ's description of Adele:

Her career is likely to be long, because she is selling to the demographic that decides American elections: middle-aged moms who don't know how to pirate music and will drive to Starbucks when they need to buy it.

[That is SFJ's entire commentary on Adele, besides calling her album an "impeccably sung collection of unperturbing soul" - Heebie]

Their career is likely to be long, because they are selling to the demographic whose anxiety dominates American masculinity: white men who worry that they can't screw attractive women because of a sexual threat posed by black men.

Their career is likely to be long, because they are selling to the demographic who drive American consumer purchases: young lovers who believe that drugs are a route to communion but would prefer to hear a persuasive third-party report on the subject than to risk an experiment.

In which I allow myself to feel superior

The successors of n continue to email me about my subscription, which does not exist, though it once did; they wish me to engage in a ritual act of renewal, whereby they will create a new subscription for me, which we will all treat as a return of the old subscription, and once again the flow of magazines to my address will be, if not exactly unstinting, at least as regular as the production of magazines at their end.

How do they entice me? With promises, either of articles on subjects that could not possibly interest me in themselves, or of articles, admittedly on subjects that interest me, but in which, as far as the articles themselves go, for reasons of authorship, anticipated tone, etc., I could only be interested morbidly. So: n+13 will apparently include, for instance, "the definitive history of Pitchfork". It is in fact true that it's interesting to contrast the general style attaching to reviews on Pitchfork from the late 90s with their current reviews; they're simultaneously more uncertain and more apodictic, as is one speaking with an obviously merely assumed authority. Nevertheless, could anything be less promising than a history of the thing, as viewed by n+1? (Not to mention, Pitchfork still exists, though I suppose they could have an argument that its history has ended.) How about a "report from the Gathering of the Juggalos"?

How about Mark Greif's thoughts about Stanley Cavell? One's attitude to the prospect is unlike that of one who expects great things!

On the other hand, there's an excerpt from Helen DeWitt's new book.

I love it. Or maybe I just love watching her crack herself up. BUT NOT THE CAT!

The earliest joke I remember making, circa two years old:

"It's not YOUR-ami, it's MIami." (repeat two thousand times.)

A later joke I made up, probably age four or so:
A girl yells "Mom! Mom! I need help!" The mom comes to help, and she's got soap in her hair. The girl says "Mom, you've got soap in your hair!" The mom says, "That's what you get when you need help when I'm in the shower!"

Since then I've gotten much funnier.

"The Metaorifice"
"A Cunty Doctor"
"In the Penile Colony"

People Unclear On The Concept

I'm riding down in the elevator with a neighbor and her three-year-old, who begins punching me. The mother, in what is clearly a practiced reaction, tries to dissuade him by saying "No, Bobby, Batman doesn't hit. Batman protects people."

And all I could think was "Batman doesn't hit?"

Excellent first-hand account of living as an undocumented immigrant in the US.

Please join me on my quest to in make another consumer purchase.

I've been used-car shopping for the last few days, and I've hit upon a vehicle that rather nicely fits my Platonic Form of The Car I'd Like to Buy (including the color; hi, I'm a superficial wanker)—with one glaring exception: it's a manual transmission.

Now, in my wildest dreams, I envision myself as an outspoken advocate of driving a stick. A member of a dying breed! Inextricably tied to my driving experience in ways those other poor saps can't even fathom! Plus, the gas mileage!

But I wonder if, after the novelty wore off, it would just be kind of annoying. Not to mention: I haven't actually driven a manual in at least a year.

I hereby solicit your opinions on all matters related to driving such vehicles, including suggestions for a vanity license plate.

Play to my weaknesses, solicitors.

As an avid donor to Barack Obama (basically, he found five dollars I left him), I've been bombarded with phone calls and emails to donate for the forthcoming election. And, until today, I had declined out of some sort of weak-sauce personal protest.

But this was just too funny, so I ponied up:

Come on, that's funny. Also: I confess that my donations to public radio are always at the mug level. I'm a sucker for mugs.

Yglesias is describing some silver linings to the brain drain problem:

When high-skill people emigrate to the United States they raise their own incomes and also raise the purchasing power of most Americans. And Americans, including working class ones, are pretty rich in the global scheme of things. If our purchasing power goes up, we buy more Chinese manufactured goods and Kenyan coffee beans. The benefits of a more economically efficient allocation of high-skill professionals are pretty broad.

Whuh? International trickle-down economics? So it's good we poached your doctor because we're upping the order we're placing with the factory you work in?

(Am I being dense? I've had a run of being...not smart here lately, and so I'm gun-shy about calling this stupid. But this seems pretty stupid.)

I Believe The Children Are Our Future

I made it to 2:30. Jammies made it a full five minutes. First person who can watch the whole thing wins the thread.

Since it's the summer and my schedule is freer, I decided to add a core muscle routine into my life. I found one for beginners. It takes about 20 minutes. I pull my little exercise mat out in front of the TV. I'm about two weeks in. I'm feeling pretty good after I finish. I think my back is less stiff in the morning.

I generally don't think that it is a good idea to undertake something virtuous using sheer discipline to keep you going. Better to creatively find some pathway to virtue that is less unpleasant to experience. I don't have one here, so I'm hoping the unpleasantness just wears off after a while.

This artist Cory Arcangel has an installation of a history of bowling video games set up chronologically, from 1977 to 2001. They all project along a wall, and you can play them, and he has hacked them so that they only throw gutter balls. I'm not quite sure why this pleases to me so much, as a commentary on life. (I suppose it's something like "Life is a series of failures, and the thing you're failing at is only an imitation of something that's supposed to be fun, and the only way to win is to recognize what's funny about your eternally recurring failures. Have fun, champ!")

He also has this website of New Yorker "Caption This Cartoon!" cartoons, all captioned with the phrase "What a misunderstanding!" Again, so great. (I used to play a game with myself to interject "It's a trade-off" into conversation in as many contexts as possible. Especially serious contexts, especially if I felt uncomfortable.)

Don't Have Time For A Full Post On This

But the Obama administration's position on the War Powers Act? Is bullshit.

A filmic adaptation of At Swim-Two-Birds is in the offing, apparently. The IMDB summary ("A playwright's life begins to mingle with the fictional characters he has created.") is already worrisome: there isn't a playwright in the novel at all, and what will become of the narrator writing the book in which the life of an author begins to mingle (begins, hell, it's that way from the get-go, he forces his characters to live in his inn) with those of the fictional characters he has partly created and partly taken from other works?

Bizarreness heaped upon bizarreness: this filmic adaptation follows an earlier, 1997, adaptation of At Swim-Two-Birds, of Austrian origin, of all things. One hardly knows what to make of it.

One out of two doctors agree.

Is it a problem for doctors to work parttime, since their medical school was subsidized by tax-payers, and doctors are in short supply, and there is an abundance of people competing for each slot in med school? This doc says yes. This doc says no.

Notes From The Trenches

So last week was a bit of a mess at work, in ways that I can't really describe in detail. Two bits of advice, though, for the rest of you: (1) It's a really useful habit to get instructions in writing, whenever possible -- doing anything that you've been told to do orally, over the phone, can go wrong. I ended up having just about enough in writing, but I was lucky rather than careful. And (2) if we've got anyone out there doing plaintiff's-side employment law in NYC, you know you want to be bringing any claims in state court under the NYC HRL? Since the 2005 changes in the law requiring it to be more broadly construed than analogous federal statutes, that's an awesome standard for plaintiffs.