Recommendations for some good novels that are more on the light, frivolous side? I have a hard time getting into sci-fi and fantasy.

(I suppose I have a soft spot for chick lit, if it's not too poorly done? And if there's more than just a love story to it? I just tore through all of Liane Moriarty's books and I wish she had a dozen more. I just really like how she characterizes people.)

Nick S writes: I'm curious what people think about the political advice in this thread:

Every place and context is different, to be sure. But the things I learned from the Irish and Argentinian campaigns to legalize abortion are absolutely on my mind here and now.

In Ireland, for example, the embrace of the 3 c's: care, compassion and change, none of which was choice. This core slogan contextualizes abortion as something a desirable society has - it seizes the moral high ground. Choice emerges from a libertarian - individual frame.

And from Argentina, the interplay of multiple messages - one to engage the base and move them to repetition, another to persuade the conflicted, and a third that unabashedly marginalized the opposition. ....

She gives this example of a commercial which frames abortion in terms of compassion:

It still embraces choice (one of the scenarios is "[a pregnancy] that isn't right for them") but it de-emphasizes that and emphasizes the idea of abortion as help or assistance.

I think it's really effective, but I also worry that it could reinforce the idea that there are good or bad reasons to get an abortion. I am generally inclined to focus on the framing of, "it doesn't matter why someone wants an abortion; it should be legal" but it feels important, at this moment, to pay attention to, "what political messages are most likely to engage people.

As this vox story mentions, it has been difficult to get people's attention.

This inattention has been mirrored in media, where abortion coverage was often siloed at so-called women's interest publications. Major media outlets rarely dedicated even a single reporter to the issues of reproductive rights and justice. Even reporters at publications like Jezebel that paid more attention to the topic often struggled to interest readers outside of brief flurries of activity around specific bans. In 2020, Solis recalled pitching her editor a piece about a new restriction on medication abortion, only to be told "that it was a good idea, and important to cover, but difficult to get anyone to read about. Even on a site like Jezebel, where a large swath of the audience is ostensibly interested in the topic, a reported piece on abortion was likely to get little engagement."

Note, that article frames it as a failure of politicians, but I read it the other way -- it's hard to expect too much from Democratic politicians if the constituency isn't engaged.

Heebie's take: I agree that we need new language to mobilize for this fight. This is from one of the comments in the linked thread, and kind of circles around something I've been feeling:

We've actually talked (with that fellow) about shift away from "choice" due to it sounding both flippant and evoking a consumer frame.

On Nick's point about reinforcing the idea that there are good and bad reasons to have an abortion: I 100% believe that a woman should be able to get an abortion without feeling the heavy weight of the world or fussing in an existential manner. But I do not think it is a good idea to fight that particular fight at this moment in time. If we need to cast all abortions as women being in a hard place, then fine.

On the last point about blaming the politicians versus the constituents: I blame the goddamn journalists and shortsighted editors who continuously pretend that they aren't moral agents with an obligation to society.

One final question: In mens' spaces that are just men by happenstance and not MRA-ness, would something like the overturn of Roe ever come up casually? In places like a friends message group where they might gripe about politics or sports or kids in general? Specifically liberal men who are pro-choice - are they actually engaged in any sense when the women aren't around?

As long as everything is shit, among kids under 18 in the US, deaths from guns surpassed deaths from cars.

This is the relevant graph, from here: 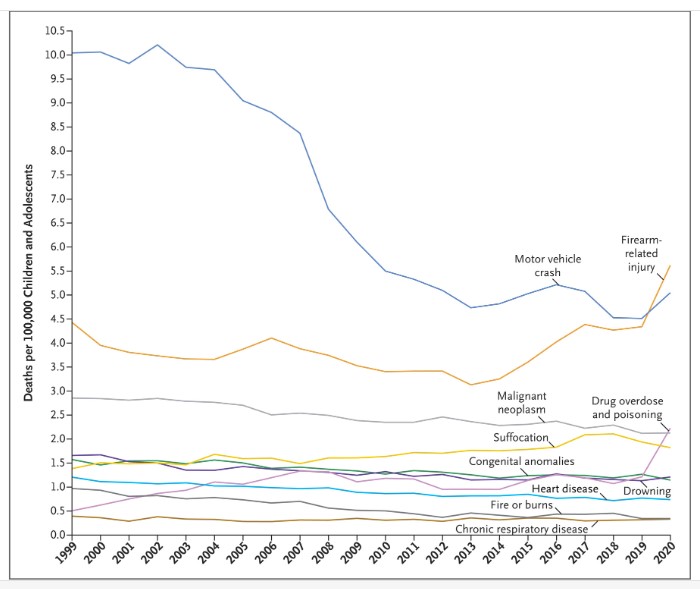 It's not broken out by suicide vs homicide vs accident. The closest is this bit:

This change was driven largely by firearm homicides, which saw a 33.4% increase in the crude rate from 2019 to 2020, whereas the crude rate of firearm suicides increased by 1.1%.1 Given that firearm homicides disproportionately affect younger people in the United States, these data call for an update to the findings of Cunningham et al. regarding the leading causes of death among U.S. children and adolescents.

I found it soothing to work on this yesterday, rather than thinking about the rolling back of civil liberties.

Lesson 3: Derivatives at a point

Here we add Lesson 1 and Lesson 2 to get Lesson 3.

The absolute rot* in a country that elects Donald Trump--a con man and game show host who has probably paid for more abortions than there are Supreme Court justices--and finagles an extra Supreme Court appointment for him to make, is a bigger problem than even a catastrophic rollback of rights, and it's not going away any time soon. Who feels confident that gay marriage will be legal in five years?

In the near term, Bernie's suggestion seems right, insofar as it might get the Democrats to actually exercise some power. I doubt they can muster even this much, and in the long term...oy.

Congress must pass legislation that codifies Roe v. Wade as the law of the land in this country NOW. And if there aren't 60 votes in the Senate to do it, and there are not, we must end the filibuster to pass it with 50 votes.

* If I hear one more person talk about what a big deal leaking the opinion is, I'm gonna scream. Any respect any of these institutions is due was undermined long ago; the Court is a purely political instrument. You act like hacks, you get treated like hacks.


College-educated voters are not just dominant within the Democratic Party; they also dominate the media and, naturally, academia--two institutions that have significant power over what issues are brought to the fore. Importantly, academia and media have also become notoriously unstable work environments lacking sufficiently well-paying jobs. The demographics and precarity of these fields are likely playing a role in the prominence of the student-loan-forgiveness debate.

There are many good proposals for how to forgive student debt, particularly targeted programs aimed at helping those who attended predatory institutions or those who never received a degree and thus missed out on the higher earning potential that comes with it. But the issue's prominence in our discourse has less to do with its merits than the changing political landscape that has stymied legislative efforts and given college graduates agenda-setting power.

Well-argued piece claiming that student debt forgiveness is essentially regressive, but not necessarily a bad idea. I don't have strong feelings about it, apparently. I'm neither fully convinced nor extremely skeptical, but I am now curious about what happens next under various scenarios.

Heebie's take: I've got some questions about this part:

[From 2012 to 2022], the average debt burden has gone from roughly $24,700 to $36,800. And that per-capita rise can be explained in part by the increasing numbers of student-loan recipients attending graduate school. (Graduate students borrow 37 percent of federal-student-loan dollars.)

So first, is 2012 to 2022 the right time frame? Not pre- and post-financial crash and defunding of higher ed?

Second, what does ~30K of debt mean in terms of monthly payments? What about those with extremely high levels of debt - how many people are trying to repay a crushing debt payment on a meager salary? Or do they tend to be law school graduates earning commensurate incomes?

The article is very convincing that if nothing else, we are talking about a fairly small, unrepresentative sample of Americans who would benefit from debt cancellation, and they definitely have an outsized presence on the social discourse on the left. Like LK, I also could go either way on it.

I know there are some sorts of debt forgiveness programs if you go into certain fields. That should definitely be a major component of any longterm solution, along with properly funding education in general.

Update: now there is a link.