Probably due a thread?

Florida banning all those math books for covering Social-Emotional Learning under the CRT law is just too on-the-nose. It has two different levels:

1. Clearly their angle is that the same people who are anti-racist are also pro-SEL, and so this pokes them in the eye. It's not exactly irrational.

From both their side and my side, it makes perfect sense.

This is a crazy story about a Pepsi promotion in the Philippines, back in 1992. Basically, numbers were printed on bottle caps, and they announced the wrong winning number, meaning that there were potentially up to 600,000 bottle caps in circulation that would have been worth a million pesos. Pepsi offered 500 pesos instead, and things turn violent.

It's obviously not happening in a vacuum:

Why had the contest sparked such anger? It was the money, of course, but it wasn't only that. The scandal tapped into rising anticolonial sentiment in the Philippines, which was then flaring over the American military presence. Following fraught, failed negotiations, the U.S. was withdrawing from the last of its six bases. The closures were a victory for nationalists, but they came at the cost of hundreds of millions of dollars in yearly aid and tens of thousands of jobs.

Number Fever also became linked in the public imagination with the country's chaotic national elections, which had taken place a few weeks earlier but were still unresolved thanks to counting delays and procedural and legal challenges. The presidential contest, in particular, had had colonial overtones, pitting Fidel Ramos, a cigar-chomping, right-leaning West Point graduate with Pentagon connections, against Miriam Defensor Santiago, a U.S.-educated lawyer who'd worked overseas for the United Nations, and Eduardo Cojuangco Jr., chairman of San Miguel Corp., a Coca-Cola partner. Other candidates included Imelda Marcos, widow of Ferdinand. "One must wonder how many voters were drawn from the voting booth to Pepsi protests," a columnist wrote. In the end, Ramos narrowly defeated Santiago, a result marred by evidence of fraud.

It was kind of a depressing read, in how palpable everyone's frustrations with the status quo are and how little agency we all have over our fortunes. And how Pepsi wasn't made to pay through the nose.

This article is paywalled, ("Amazon warehouse workers suffer muscle and joint injuries at a rate 4 times higher than industry peers") so all I have is the chart that I snagged off Facebook: 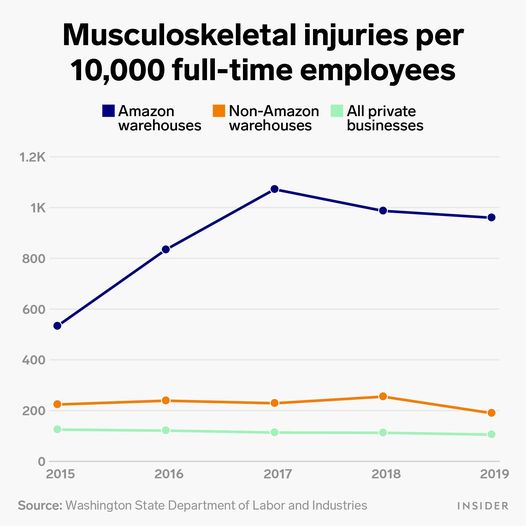 Having injuries 4x as high as others is bad. But also, having 1 in 10 employees get injured yearly is pretty terrible. I wonder if this is based on workman's comp claims, or what.

This article doesn't have the chart above, but this is interesting:

Injury rates at Amazon warehouses were lower in 2020 compared with previous years, the SOC found. The decline was likely a result of Amazon temporarily pausing performance tracking for part of last year to give workers more time to wash and sanitize their hands amid the coronavirus pandemic.

and this is terrible:

Amazon's delivery service partners, or DSPs, are contracted companies, usually distinguishable by Amazon-branded cargo vans, that are responsible for picking up packages from Amazon delivery stations and dropping them off at doorsteps. Because they aren't considered employees of Amazon, the company doesn't report injury rates among drivers.

In 2019 and 2020, at least 129 DSPs filed injury records to OSHA that cover more than 6,000 workers, according to the study. The SOC found that these DSPs reported injury rates of 14 and 13.3, respectively, per 100 workers. Additionally, the majority of injuries reported by DSPs in 2019 and 2020 were severe, requiring employees to take time off work to recover, the SOC said.

It feels like I put more effort into avoiding companies 10 or 20 years ago. I don't know if I'm more cynical, or more tired, or if it's just not promoted as a form of activism as much anymore.

I guess I'm curious about this: which companies do you still avoid, and how hard do you work to do so?

The ladies of Chi O are very sweet and a little reserved, but they are closet dazzlers. Who else would conceive of an unofficial dress uniform that combines the subtlest shades of peach in a tailored Ultrasuede dress with a gaudy mass of gold-filled jewelry and a flurry of ultra-bleached hair? It's a paradox.

For most women, looking "grubby" comes as naturally as breathing. It's a condition accomplished by not trying to look any better than you appear at waking. It's easy. You just put on whatever's handy and--voila--you've got the grubby look. But for a Kappa, grubby is a fine art, a studied effort that rivals putting out a fall designer collection. You can't have just any grubby look; it has to be the one sancÂ­tioned by your Kappa sisters. Soon the unlikely combination of painter's pants ($7) with an Izod knit shirt ($16-50) and topsider shoes is born--worn with gold and sterling accesÂ­sories and simple but stylish haircut, of course.

There are photos, but not nearly enough.

lily delurks and writes: I realize that (unlike me) the Unfoggedtariat is not inclined to wallow in Ukraine, but this article answered a lot of questions for me-- why escalate to full-scale war? why now? it can't just be NATO's fault, can it? Is Putin truly insane?

KYIV, Ukraine -- The window is swiftly closing on Moscow's ability to launch a major offensive against Ukraine without the risk of Russian forces suffering a barrage of retaliatory precision missile strikes -- both at sea and on land.

"Neptune missiles are a promising Ukrainian development and, if mass production is launched, can become a significant deterrent, as they are capable of destroying not only ship targets, but also ground targets," the Ministry of Defense of Ukraine announced in a release.

"I think Ukraine's development of long-range missiles is very significant and certainly a driving factor in Russia's current threats and activities," said Rob Lee, a fellow at the Foreign Policy Research Institute who specializes in Russia's armed forces.

Considering the fact that these are the missiles that sank the Moskva, it also provides useful context on why Putin is claiming it was a fire-- not missiles-- and the increased intensity of the Russian assault yesterday and today.

I should warn you that the source is extremely sketchy and vulnerable to attack by critical minds, but I was just surprised to see that 1. someone was paying attention back in January and 2. that they saw Ukraine's home-grown weapons industry as a potential threat to Russia.

Heebie's take: (It is certainly true that some of the Unfoggedariat is wallowing hard, but it's also true that I have not been posting much on it. I tend to compartmentalize these things.)

I had thought that the "why now?" question was due to the winter Olympics, and some sort of agreement with China to postpone, but maybe that's overly simplistic. This also makes sense to me.