So the most hilarious part of my day yesterday was watching the freaked-out men in the bare-shelved dairy section of the grocery store, who had obviously been sent there with a list by their wives, trying to decide what milk substitute would get them in the least trouble: buttermilk, whipping cream, or vanilla soy. The most hilarious part besides watching Armsmasher lose his shit, that is, but I figured that was implied.

I bought us a big suitcase. When we were packing last night, we kind of suspected we might go over the 50 lb weight limit and get charged extra. But things were hectic, and we were trying to stay organized, and so we did not spend much time sweating the surcharge, as opposed to being charged for two, smaller pieces of luggage.

We got to the counter this morning. Our bag weighed 64 lbs. So they charged us ONE HUNDRED AND TWENTY FIVE FUCKING DOLLARS. On top of the $20 normal highway robbery for checking a bag.

We are flying tomorrow morning, again. (Jammies' sister lives in the city where we had a layover, so we bought a ticket where we could spend the night and visit, en route.) We're borrowing a duffel bag and splitting our luggage up, so we should get charged $40.

I really want to pack the duffel bag inside the big suitcase, and wait until they've rung up $125, and look at them and say "Really? That's fucking outrageous." Then we would unzip the suitcase, and pull out the duffel bag, and say, "We'll just each check one bag apiece, then."

This is awesome, in the awe-inspiring sense of the word.

How BÃ©rubÃ© got his presidency

Last man standing at the MLA.

I feel stupid and contagious. Entertain me.

I think the best gift card would be from some online store that you've never heard of, and then you just have a ball exploring their sites. What are your recommendations? This is totally a thread designed to entertain me while I grade. Let's see how many comments it takes until we're discussing whether Obama has disappointed us by keeping unsustainable populations in our cities.

Change We Can Sort of, Kind of, Ish, Imagine. Maybe. Perhaps.

I feel mildly bad that I read this with an immediate hope that it pissed off Dick Cheney.

Not that I really care about pissing off Dick Cheney (my understanding is, he's not a lurker), but the idea that talking to people we might disagree with is a bad idea? Stupid. I bring you:

It is relatively unusual for an American president to send the North Korean dictator a personal communication so early in his term. Both Bill Clinton and George W. Bush eventually sent letters to Kim, but only after extensive diplomatic efforts to restrain North Korea's nuclear ambitions. Efforts early in Bush's term to send a letter were stymied by an intense debate over whether to use an honorific such as "his excellency" to address Kim.

The Obama administration has insisted that North Korea return to six-nation talks on its nuclear program, saying the United States will not lift sanctions or offer other benefits to persuade North Korea to simply begin talking again. Pyongyang has not committed to return to the negotiations, but its propaganda organ, the Korean Central News Agency, reported positively on Bosworth's visit, perhaps reflecting the impact of Obama's personal missive.

"Through working and frank discussion, the two sides deepened the mutual understanding, narrowed their differences and found not a few common points," the KCNA said.

A treaty that would recognize North Korea's sovereignty -- and normalize relations with the United States -- has long been an important objective of the government in Pyongyang. U.S. presidents often have dangled the prospect of a deal if North Korea gives up its nuclear weapons.

When Bush wrote Kim in December 2007, he said normalized relations were possible if North Korea submitted a declaration on its nuclear programs that was "complete and accurate."

Clinton wrote to Kim in October 1994 after a landmark deal under which North Korea would freeze its nuclear programs in exchange for energy aid. On its Web site, the KCNA still lists the receipt of the letter as one of the major events in a chronology of Kim's life.

Getting this sort of diplomacy right, or, at least, getting it better isn't the whole ball game, but it matters. And it's a substantive difference between this and the previous clown show of an administration when it came to diplomacy.

I conclude with lots of hand-waving towards Iran and China and Pakistan and a whole bunch of unknowns.

Breaking: The Angry Anger did not make the cut.

There's some real gems here. (Skablow Eskabar? That's great.) But a lot of these bands would have done themselves a favor to visit one of the band name threads in the archives before picking their names. (No I'm not going to link to them; RTFA.)

What my mother said.

I observed, to my mother, that when Hawaiian Punch was first born, her hands reached just up an over her ears. But now, eight months later, she can pat the top of her head.

Mom said that back in the day, a child was said to be ready for school when they could reach up and over their head, and touch their opposite ear. Boy did they have charming rubrics back then.

From the culture desk

I'm familiar with this internet corner's hostility towards holiday music, but I really like this one. I do enjoy this time of year, and he's on about why.

I'm smug no longer smug about the bonus question on the Calculus test:

On the news lately, I keep hearing about the unemployment rate. Suppose that U(t) is the number of people that lose their jobs each month.

Last night, I hear the following report: "The rate at which unemployment is rising has been slowing down." What can you say about U(t) and its derivatives?

Let's see what they have to say about it!

Christ, what an asshole.

Here is a typical example of the racist, homophobic Texan:

Courtesy of Sifu Tweety, who shakes is head despairingly at the utter homogeity of Texans. More here.

There is a soccer camp for the next two months, on Sundays. So I went to soccer camp for two hours yesterday. We ran a lot of drills. We focused on fancy footwork. We did a ton of drills that required us to stay on the balls of our feet.

Afterwards, I was driving away. I realized my lane turned into a right turn lane at the next intersection, and there was someone a little behind me, in the thru lane. So I gunned the motor to get in front of him.

Then the light turned yellow. I certainly didn't want to be the prick who slams on their brakes right after cutting him off. So I decided to accelerate through the yellow light.

Then I saw there was a cop, the first car waiting to go cross-wise. Then my foot knotted up into a giant charley-horse, from standing on my toes for so long.

Then I leaned on the horn. I have no idea why. My foot hurt so bad, and I was so flustered, and now I'm honking my horn? So I didn't ever hit the gas, because of my crampy foot. Basically I coasted through a red light with my hand on the horn, in front of a cop.

I practically pulled myself over, because I needed to get my foot to straighten, if nothing else. The cop just continued on his way. I have no idea why he let that one slide. 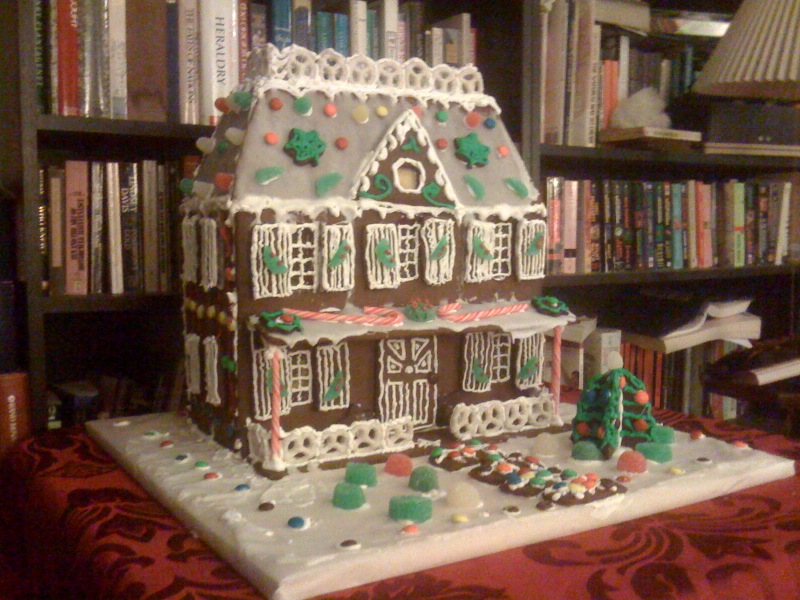 This is as much enthusiasm as I have to show about Christmas, right? Because I'm mostly out of enthusiasm here.

Below the fold, what the house looked like before the kids got their hands on it. They did a nice job, no? 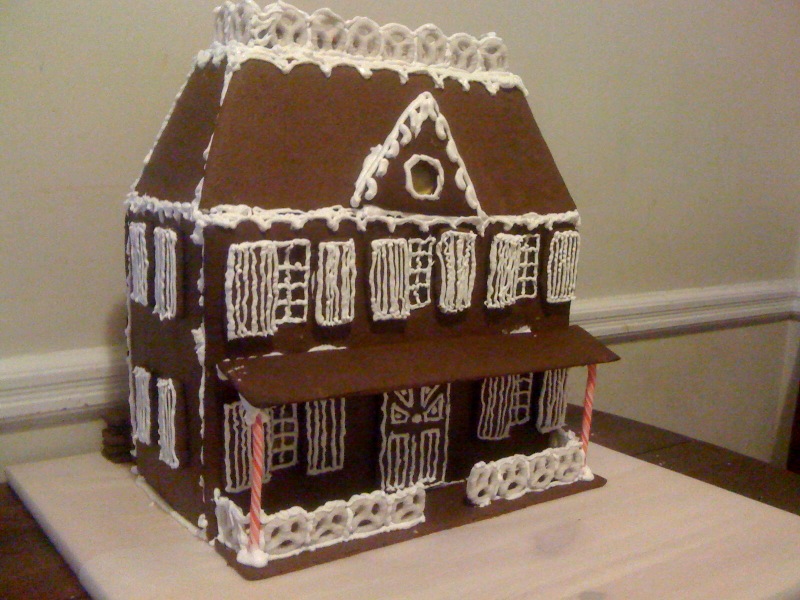 Remember Fouad Al-Rubia, the Kuwaiti aircraft engineer that Judge Kollar-Kotelly* ordered released back in September, after finding that during the eight years we've been holding him prisoner, we'd tortured him into making false confessions?

We've actually let the guy go home, rather than dragging our feet through every possible method of delay within the judical system, and then defying the court as our past practice would suggest. So, half a cheer for the Obama Justice Department, and my sincerest apologies to Mr. Al-Rubia. Hopefully he got an apology from someone official as well, but somehow I doubt it.

*Whose name I misspelled egregiously in the linked post, and then forgot to fix. My apologies to the judge.

(h/t to CharleyCarp, who pointed out the story to me.)

So Houston becomes the first major city in the US to elect an openly gay mayor. This certainly highlights the complex relationship that people hold towards historically discriminated minorities. Here's a couple theories:

1. Only 16.4 % of the eligible voting population turned out. Perhaps the story here is that anti-gay movements failed to kick in and mobilize their syncophants.

2. "I'll be racist or homophobic until it interferes with my financial gain." She was in the oil and gas industry for twenty years, and is totally conservative.

3. Just as you can be quite racist and happily endorse Obama as a Cosby father figure, perhaps you can be quite homophobic and employ some mental Ellen gymnastics. Maybe older women can tap an asexual Oprah trusted aunt vibe, and this could be simultaneously held with all the paranoia and gender enforcement that we assume Texans feel passionate about.