I'm Not Sure I Like Living In The Future

If it involves having to talk about the ethics of whether encouraging kids to control cockroaches with electrodes is cruel:

The cockroaches are placed in ice water as a kind of crude anesthetic. Then the kids are instructed to sand down a patch of shell on the cockroach's head and superglue electrodes to the newly smooth area. Next, a groundwire is stuck into the cockroach's thorax--the area right between its neck and stomach. Finally, the kids must carefully trim the antennae and stick small silver electrodes in them that will receive the signal from the circuit that attaches to the cockroach's back and resembles a tiny backpack.

I'm hoping that I missed the obvious signal that this is a hoax. Otherwise, can it be the nineties again? I sort of liked the nineties.

Not like we've been refraining from discussing them, but let's have a debt ceiling Truthers thread. This particular gambit is so fucking extra galling, because the two outcomes to their misbeliefs are: either they continue believing that they were always right, or we actually tank the economy.

2. I need a pep talk for purging furniture that I love. My grandmother has moved out of her apartment and into 24 hour care, and my parents are downsizing, and I'm acquiring hand-me-downs from them. Therefore I must displace some of the items I've loved for the past 10-15 years. I need a pep talk. Some sort of catchphrase that I can reach for and use to cement my resolve that these items must go.

3. It kills me that there's no easy way to link music without linking the video, because the video changes the experience of the song and sometimes I hate the video.

I hate the real video, but Tweety helpfully located this version.

I love the wobbly drumtrack so much. Tweety hates the guy's voice, which is fair. The lead singer is no Raul Malo.

It's sad (but not strange) how common it is to see amputees now, compared with a decade ago. The veterans I see are mostly students on the GI bill. It makes me angry all over again that they got used in such a bullshit war. (I suppose I don't know if they're Afghanistan vets or Iraq vets, and I suppose Afghanistan is not quite the bullshit war that Iraq is. Still, I roll it all into our warlike exuberance when I see the students.)

I missed the presentation, but TIAA-CREF helpfully put together a slide show titled "Understanding Market Volatility" for my retirement package. Perhaps the people near retirement are freaked out by the recent market volatility. Perhaps if they only understood it better, they wouldn't mind their volatile changes in fortune.

That is helpful! You know what would be even more helpful? If I didn't have to gamble with the stock market in order to avoid living in poverty when I'm old.

Let us gather, that is to say, meet up, that is, create by means of a meeting a gathering, of us, to welcome the recently arrived in our midst with footgear of unknown cut and material heads of now-former East Coasters, namely, Bave and Mister Smearcase.

Next week has been suggested. Now, I personally would rather that this not take place next Tuesday, Friday, or Saturday, but, you know. The needs of the many outweigh the needs of the few, even if I number among the few.

You should really listen to these.

Helpy-chalk uses Calming Manatee. I like The Roots on Yo Gabba Gabba. Let's have a soothing thread. Share your salve.

Doctor Science puzzles over this quote:

Historically speaking, animating female characters are really, really difficult, 'cause they have to go through these range of emotions, but they're very, very -- you have to keep them pretty and they're very sensitive to -- you can get them off a model very quickly.

and I do too. They're very, very what? What? (And why are we trying to get them off?)

1. I find myself so angry about the shutdown and impending debt ceiling crisis that I'm starting to tune the whole thing out. But this is my favorite photo to come out of the shutdown.

2. E. Messily sent along Career Woman Must Make 300 Sandwiches to Earn Marriage, which is being liveblogged here.

This is, of course, incredibly obnoxious, because the underlying idea is lovely - one partner enjoys making fancy sandwiches which gives the other partner great pleasure - and then puts a bunch of contrarian-feminist shlock on top of it. We're soooo retro-scandalous in making a career girl sweat for an engagement ring! Aren't we just so naughty!

A reader writes in:

I have an old friend who I mostly only interact with through the passive viewing of statuses on Facebook. He has suffered a large number of health setbacks, starting a few years back with his contracting of HIV. He is also pretty self destructive, it seems like, and very self-dramatizing (evidence for the preceeding: facial tattoos, among other things). Recently he posted that he was quitting drinking in order to start the regimen of medicine to treat what sounds like some sort of cancer (he has been cagey on the details). Then the other day he posted that he was researching alternative medicines because in his opinion the cancer treatment would do more harm than good, so he wasn't going to do it after all. I looked at the comments on that post, and they were all supportive references to various bits of woo about essential oils or whatever that cure cancer. So, the question to the mineshaft is, do I engage, and post something on that thread saying that he should really do the course of cancer treatment his doctors recommend? Do I unfriend him because it's too sad to watch? Do I just, like, ignore his posting about his terrible decision-making and hope he turns out okay?

Gah. First, it's not obvious to me that the friend is or will be skipping the Western medicine treatments, even though he says he is. But nevertheless, when the stakes are this high, you have to err on the side of caution. On the other hand, a person will not hear something they don't want to hear. So...

If so, speak up. Otherwise I have no idea.

Hey, it's another long article criticizing Gladwell. But it starts by noting this curious claim of Kottke's:

I enjoy Gladwell's writing and am able to take it with the proper portion of salt ... I read (and write about) most pop science as science fiction: good for thinking about things in novel ways but not so great for basing your cancer treatment on.

(The ellipsis is in the thing I'm quoting from.) One wonders: how does Kottke know what the proper portion of salt is? Wouldn't he have to know quite a lot about each of Gladwell's topics to know something like that—in which case, why would he be reading Gladwell at all? Or is he conservatively setting the proper portion to "it's all rot"—in which case the same question arises?
Go to Main Page | Link | 50 Comments

A friend reports a heckler at a Billy Bragg concert: "My father fought for your right to free speech, so shut up!"

In Which I Subtly Brag About the Beautiful Place I Inhabit

Yesterday, some visiting friends wanted to go apple picking, and so we went. Except it was plainly too hot for apple picking (89°), so mostly we sat around in the shade, sipping a peach-chardonnay concoction and taking in the great views. 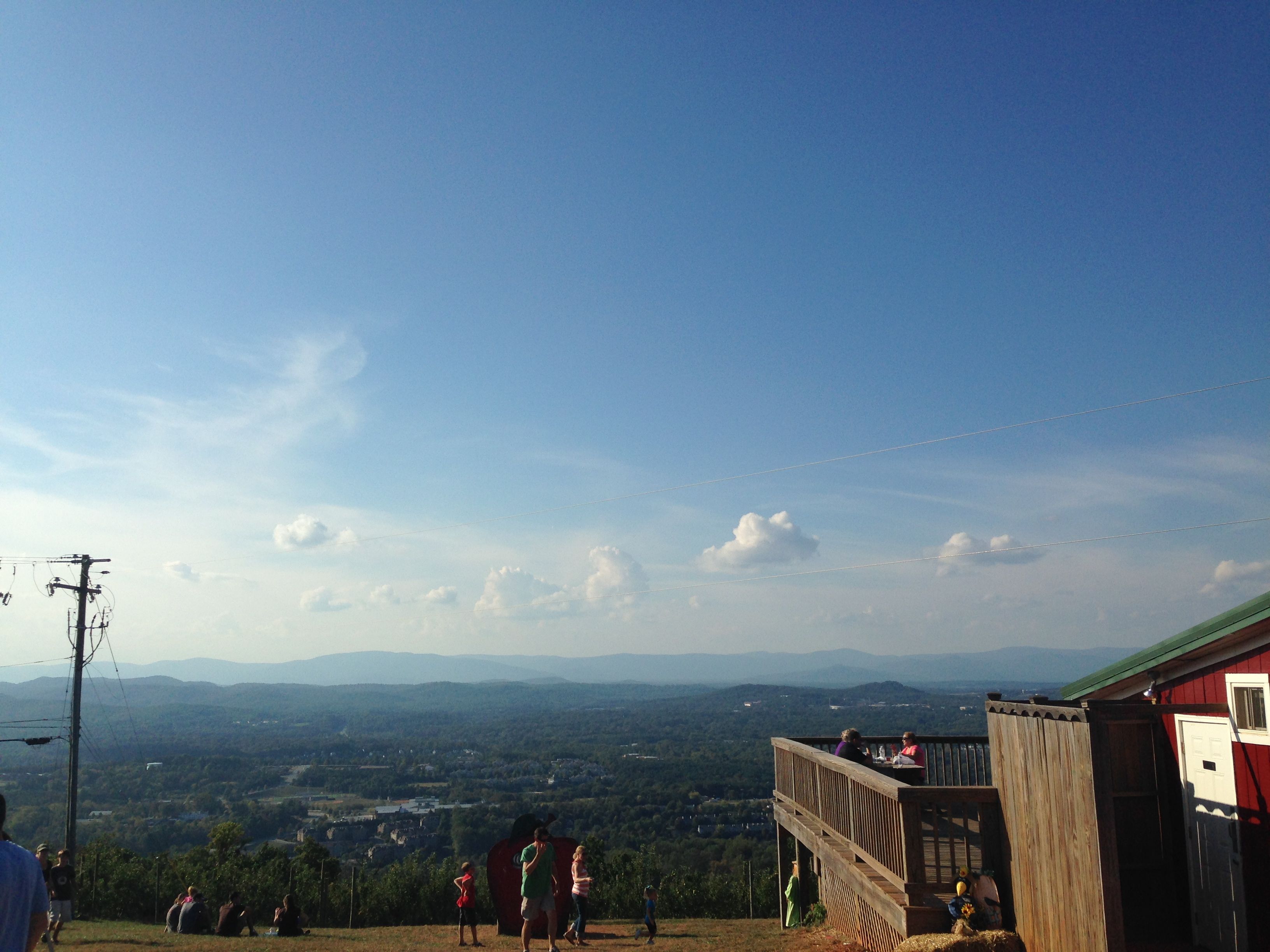