Stuck on earth with a lot of terrible people.

This is from 2000, so it most likely has gone 'round the web multiple times already. (Maybe I've already read it. Maybe I've already posted it!): "The Only Moral Abortion is My Abortion"; When the Anti-Choice Choose.

"I've had several cases over the years in which the anti-abortion patient had rationalized in one way or another that her case was the only exception, but the one that really made an impression was the college senior who was the president of her campus Right-to-Life organization, meaning that she had worked very hard in that organization for several years. As I was completing her procedure, I asked what she planned to do about her high office in the RTL organization. Her response was a wide-eyed, 'You're not going to tell them, are you!?' When assured that I was not, she breathed a sigh of relief, explaining how important that position was to her and how she wouldn't want this to interfere with it." (Physician, Texas)

At this particular moment in time, I found this too infuriating to finish, but it's well done at least.

I wish there was some way to follow up with the patients. Many of them are young in these anecdotes and social pressure plays a large role in their anti-choice activism, and I wonder if when that stage of their life ended, they had enough perspective to soften their stance. But I'm sure many of them just deep-sixed the little interlude in their life forever. The human brain is marvelously flexible.

So I click-baited to a list of tweets about worst first dates, and the link is not worth clicking on, but I'm weirdly fascinated by the copy before and after each of the tweets. For example:

This girl's date was not a true gentleman; in fact, he demonstrated that he was a big jerk by picking her up and then ditching her! Who acts in this manner? Even though he tried to park three times but was unsuccessful, that is no reason to just abandon someone who is standing on the sidewalk. I mean, come on, this is so not cool. 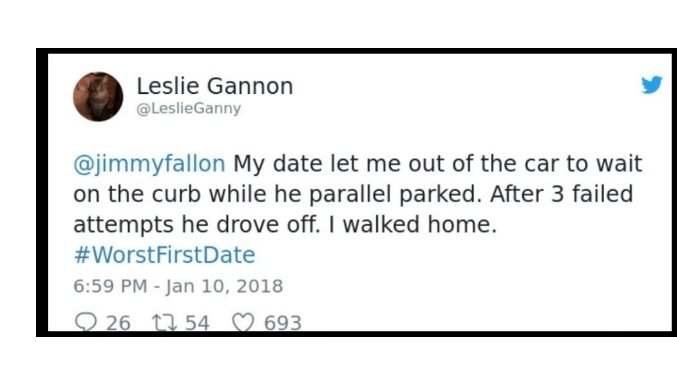 If we were in Leslie's position, we would at the very least anticipate that he will try to make amends for his inappropriate behavior by arranging for a large delivery of flowers to be sent to her house. If he left her the next day without saying anything, then the only thing that Leslie should be saying is, "Thank you next," so we are keeping our fingers crossed that he at least apologized to her.

Can a bot write that kind of thing? Or is a person churning out this pseudo-explanation?

Tedious explanations of self-explanatory things are sort of fascinating to me, because they something is going so very wrong. Either the speaker is operating in good faith and lacks the recognition that the thing is self-explanatory, or the speaker is operating in bad faith and using rules of etiquette to control the other person, or the speaker just rambles and doesn't think about the other person. (Or the speaker is five). I love seeing how the listeners respond in these situations. Who is eternally patient? Who listens, earnestly open to the idea that maybe they missed something? Who is incredibly squirmy and trying to make eye contact with other people to make sure that we're all getting how terrible this situation is? (Me.) How do people politely extract themselves, and what does that imply about how they sized up the speaker? (That's a thing I enjoy observing, not a prompt for the 'tariat. Unless you feel like it.)

Minivet writes: In Nevada County, CA, a reality-based candidate for county clerk was targeted by insurrectionists, but still won with 68% of the vote this past June (open seat).

A rich Republican from elsewhere attempted to throw away at least $82,000 for a full manual recount. (The day after the LA Times published that linked story, the bankroller Randy Economy (what a name) called off the recount. Probably realized free-floating suspicion was more useful.)

Nevada County is often called rural, and it does contain a lot of mountains and forests, but its main built-up areas are about an hour's drive from Sacramento, except one that's a half hour from Reno, and it has a big tourist industry; so probably better labeled suburban/rural. It went for Biden by 56 points to 41, and against Newsom's recall by 54 to 46. (I suspect Adona overperformed them because this is an obscure downballot race without party affiliation on the ballot, but everyone gets their occupation listed, and hers being "assistant clerk" made it a slam dunk for low-to-medium-info voters.)

Yet these insurrectionists can still do a lot to intimidate: Adona had to get a restraining order against some of them.

Heebie's take: I'm not saying there's any way to right this ship, but a necessary precondition is eliminating the vast bulk of the propaganda that these extremists are absorbing.

I've come to believe that there is one true thing about the current Republican party, which is a principle of acceleration. The base is fed off of acceleration. To an extent, this is true of all media, but not the way it is for the rightwing. The rightwing's divorce from reality is always ratcheting up, and we will have to figure out a way deal with the sources of the propaganda.

When kids are infants, just when you think you've grokked their behavioral patterns, everything changes and suddenly the rocker doesn't put them to sleep, and binky is boring, and so on. The changes are slower as they get older, but I think I just witnessed a clear delineation. My 11-year-old had a rough day at basketball and was kind of down, so I started to give him a pep talk. I was about three words in when he said, "Noooooo! Don't be cheesy! Just say 'Toughen up. Don't be a bitch.'"

Barry Freed is in NY

And says: Hello reprobates, I'm in NY and free from the 12th to the 20th and would love a meet up with the NYC area crew (and any visitors). Please chime in.

Heebie's take: That is a very upbeat article!