I've taken to eating irresponsible amounts of trail mix. And I've never even been particularly fond of trail mix or even snacking, generally, but a cow-orker introduced me into this one particular store-brand combination of dried fruit and nuts that's just pheNOMenal. (In particular, I usually hate dried fruit, so this really is something special.)

Oh, and "irresponsible" is an exaggeration. For one, there are no doubt worse things I could be snacking on. But it is sort of expensive—$4.50 a bag—and I can easily plow through a bag in two days.

So, I'm on the lookout for a more reasonable keep-at-my-desk snack alternative. Maybe I'll finally getting around to making those damn kale chips you people rave about. Or maybe I'll just talk about it on the internet.

And that, friends, is why there's an analogy ban.

Catching a few minutes of call-in-show discussion about Mohamed Osman Mohamud's arrest (specifically, they were discussing the legal standard for entrapment), I was surprised to hear a caller suggest this is just like a lot of child-pornography cases, where the government entices a person who otherwise isn't doing anything wrong.

You do love me, after all!

Been watching a lot of TV lately. Clearly, jewelry commercials are the worst fucking commercials ever. I think the one I hate the most is the one where the man and woman are at a cabin, watching a storm through the window, and the lightning crashes, and she jumps and spins around and buries her face in his shoulder. He says something like, "Don't worry, I'm here for you. And..." bringing out jewelry box... "I'll always be here for you." It's some necklace that somehow echoes the theme of being a grown fucking woman who needs comforting when the lightning crashes. But there are a lot of other bad ones out there, too.

Hey, guess what, the Grammy nominees have been announced, and the selection is mind-blowingly stupid [alternate link from my browser cache if that one doesn't work]. (I looked because twitter led me to believe that the jazz category (since I didn't know about the diversity of jazz categories) was decently populated: Vijay Iyer, Darcy James Argue (overrated), Dave Holland, and the Mingus Big Band have all gotten nods. But really, no Threadgill? No Lehman? Nothing on Clean Feed, or 482 Music, or …? No Tyshawn Sorey? It's all so strange.)

But what really seemed remarkable was that fully 80% of the nominees in the Best Solo Rock Vocal Performance category are over 60 years old (NTTATWWT, but these particular people are Neil Young, Paul McCartney (for "Helter Skelter", no less), Robert Plant, and Eric Clapton, so, I mean, at least try to pretend to try). The other one is John Mayer.

This is also pretty choice.

Apparently, pre-1981, doctors used to halt preterm labor by putting women on an IV alcohol drip. I imagine this was an ethanol drip? I can't find anything online about the proof of the alcohol of such a thing. According to Jammies' mom, who worked as a neonatal nurse, it "wrecked a few marriages" as the women got ridiculously drunk. I pressed her as to what she meant - admissions of paternity doubts? long-held grudges? - but couldn't get a clear answer.

The Times has an article about how the Democrats have given up all their leverage on the expiration of the Bush tax cuts: they can't get their plan through this month without two Republican votes, and if nothing gets passed now, the Republicans can pass whatever they want through the House in January, "forcing President Obama and Senate Democrats to choose between a purely Republican plan and an across-the-board tax increase."

This is just stupid: the Democrats have exactly as much leverage as they ever had. Neither party can pass a tax plan without the cooperation of the other, and what happens automatically -- reversion of taxes to Clinton-era levels across the board -- is closer to what Democrats want than to what Republicans want (yes, the lower-income tax increase is anti-stimulative, so it's not ideal, but the upper-income tax increase is a good thing.) If the Senate Democrats stand up now and say that they'll pass a plan preserving the Bush tax cuts for lower-income taxpayers but letting them expire for everyone else, and that they'll let the cuts expire across the board otherwise, they can't possibly lose: there's no way for the Republicans to force a different outcome.

Do I expect this to happen? No, I expect the Senate Democrats to fuck it up. But the problem isn't that they lack leverage -- they've got a procedural situation that's all in their favor. If they mess this up, it'll be an unforced error.

As we discussed a week or so ago in comments, this would be a good time to call your Democratic Senator and point this out. It can't hurt, and it might help.

NASA will hold a news conference at 2 p.m. EST on Thursday, Dec. 2, to discuss an astrobiology finding that will impact the search for evidence of extraterrestrial life. Astrobiology is the study of the origin, evolution, distribution and future of life in the universe.

Based on the listed participants, Kottke sez:

So, if I had to guess at what NASA is going to reveal on Thursday, I'd say that they've discovered arsenic on Titan and maybe even detected chemical evidence of bacteria utilizing it for photosynthesis (by following the elements). Or something like that.

Update: Not that exciting.

Who Are You Going To Believe? Me Or Your Lying Eyes?

One hundred and fifty years later, the Civil War apparently had nothing to do with slavery. Of all the bullshit out there, it's funny how this sort of thing gets under my skin; it shouldn't matter that much that there are a fair number of Southerners insecure and neurotic enough that they can't handle the fact that their ancestors fought for a cause that's generally recognized as not just wrong but embarrassingly immoral.

I think what gets to me is the Orwellian nature of it all; that it's a power play. If Confederate-worshippers can make it seem aggressively impolite to insist on straightforwardly, obviously true historical facts, then we can't rely on facts to establish anything, which is exactly how politics has been feeling lately. Not, of course, that stamping out Civil War revisionism solves anything, but it'd make me feel better.

Not As Impressive, But We Made Fruitcake 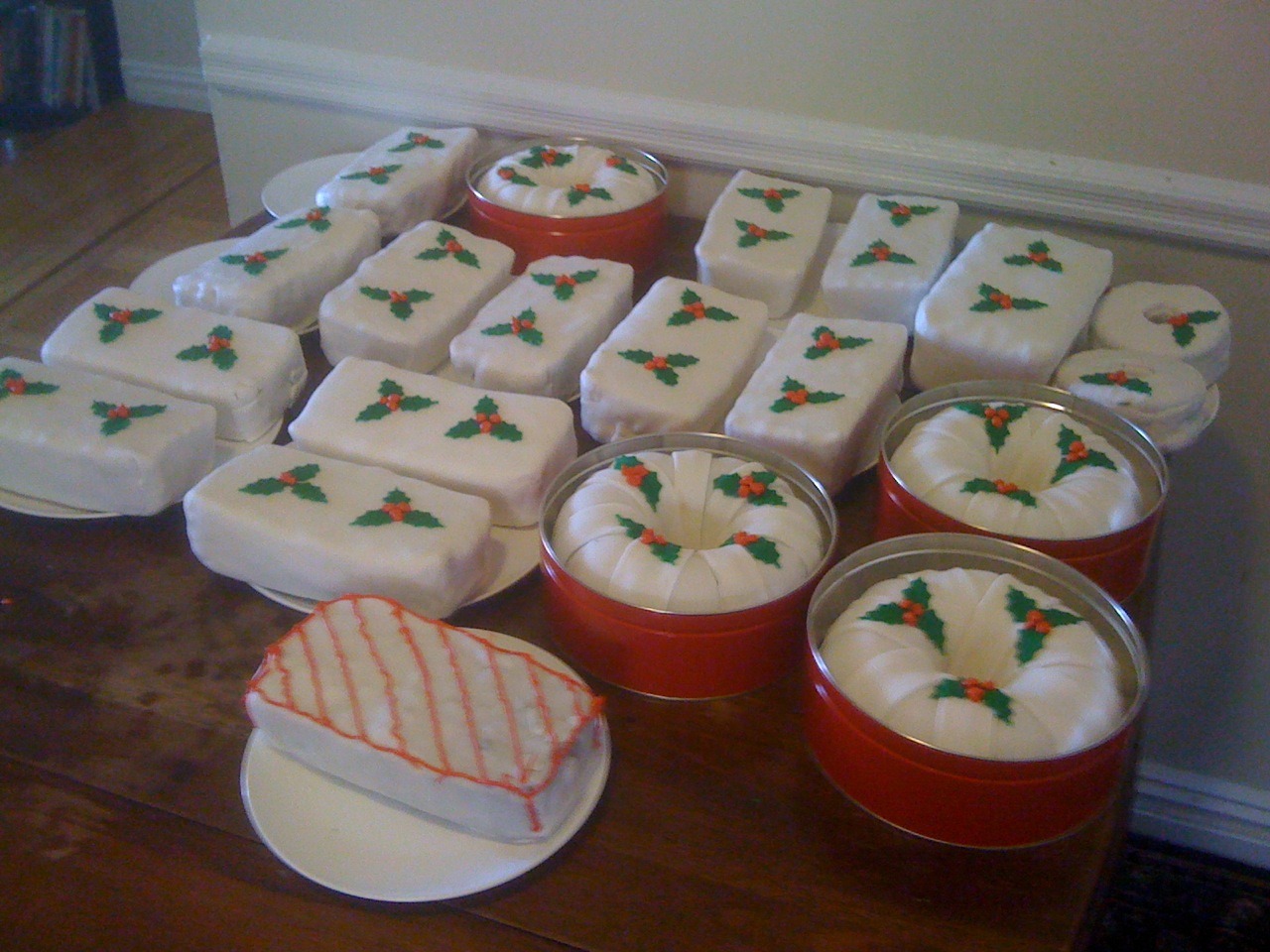 The 2010 fruitcake production, soaked in brandy, covered in fondant, and ready to mail out. Buck was going to bring one with him when he goes to CA to visit his employees there for Christmas, but figured it probably wouldn't make it through airport security.