Punished! For loving the USA too hard.

In my opinion, they should not have been sent home and forced to change clothes. First, freedom of speech and blah blah blah.

But second, I don't even think that's a good disciplinary strategy to react so strongly to passive-aggressive provoking. If I were in charge, I would have waited to take disciplinary until I saw actual anger or aggression, and then it would have been one of those long boring reconcilliation things where we gather everyone involved and discuss which factors (ie patriotic clothing) were deliberately chosen to provoke the anger, and how the situation might have been diffused if different choices had been made over the past few days.

Thirdly, sending them home just creates one of those little stories that people forward all over the place, with the indignant conservative headline of "Punished! For being patriotic!" Which is how it showed up in my Facebook stream. Gah.

I've had it less than a year, put probably no more than 1500 miles on it, and I just broke my second pedal. Are Bromptons known for this kind of thing?

Update: Picture below the fold. 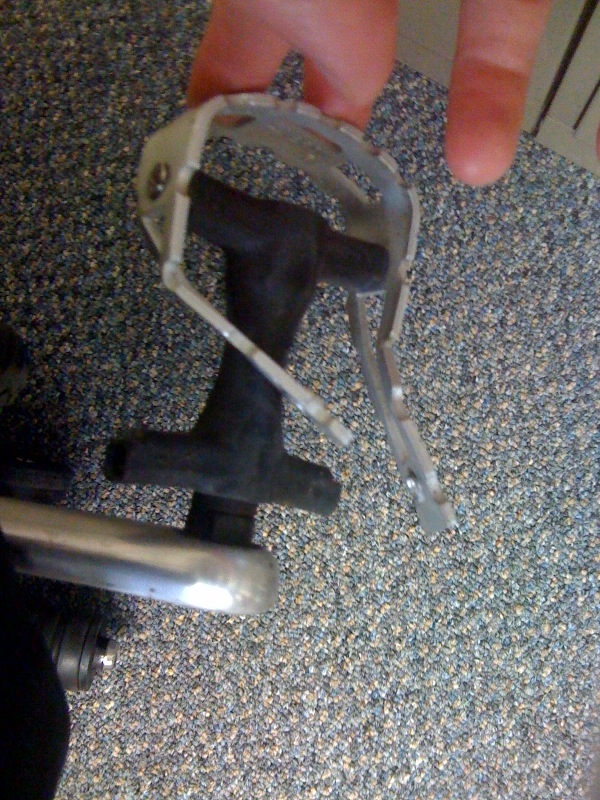 What are you trying to tell me, Dedalus Books?

I suppose there is something about the image in the upper-right corner which says "a kind of intellectual fiction which is very European".

Something something UK elections here you go.

Via E. Messily, more possibly sketchy Facebook privacy violations. For awhile, Facebook was downloading apps without your permission, when you visited other sites while logged into your Facebook account. Facebook responded to the story and said it was a bug that has been fixed. Another recent bug allowed you to view your friends' private chats. Sure is buggy in there.

Do you guys fret over this stuff? Have you removed yourself from Facebook or anything out of privacy concerns? I have two browsers open, generally. One where I'm professional Real Name, where I'll log into Facebook, and one where I'm Heebie. Generally Heebie is my Google Chrome browser, since Heebie is my gmail account, and I don't trust Chrome not to talk to all my websites and sell my soul, either. (But there are possibly bigger privacy concerns than the world discovering how much time I waste online.)

I can't remember where I read this. And I can't remember if this was the point of the post, or an incidental comment that was taken as fact, but it has made a big impression on me: Republicans just hate liberals. They just hate us.

This has made everything fall into place for me. Of course they're inconsistent and rabid. Of course they sound like a conehead imitation of intellectual discourse. They're not motivated by working towards a solution that works for everybody; they're motivated by sheer hatred.

So much of my head-scratching about why they do the stupid shit they do now melts away in this framework.

Of course, this doesn't account for everyone who I disagree with. Wall Street's actions are completely explainable by a drive for short-term profits. But the conservative media machine? They just hate us. I get it now!

I'm pretty much the Aimee Mann of drywall installers

Go on, ask me how I'm different.

More on that model than you would ever have believed.

A National Day of Slayer, on the other hand...

To the extent that I identify with any religion (and that would be calling myself "vaguely culturally Catholic" or something), I'm baffled that the more devout among us want a National Day of Prayer at all.

But I do find the photo at the linked story to be wonderfully foreboding. Especially when taken with this quote:

"It's time for Americans to take a stand and say, 'Enough is enough! No longer will an atheist in Wisconsin undermine a tradition for millions of Americans who simply want to pray for their nation.' "

Something about the apparently sinister "in Wisconsin" delights. Yes. Not just any atheist. A magical one with horns in Wisconsin.

I believe I may start adding "in Wisconsin" as a general intensifier. "The concert last night? It was really good—in Wisconsin."

Anyhow, I made this seemingly semi-home-made-type salsa, which is actually quite good and recommended in a pinch, despite not being the foodiest food for all who might food:

-1 can Hunt's™ (for some reason the brand was emphatically important; take that as you will; as far as I know the guy who shared it wasn't in any way affiliated with Hunt's) Tomato Sauce
-2-5 jalapeños, depending on desired hotness
-1 diced white onion
-Salt and pepper to taste

The only trick is to boil for five minutes (I won't say blanch here, as I think five minutes seems long for my understanding of blanching) the jalapeños. Then, send them to your nearest local blender or food processor along with a bit of that water you boiled 'em in.

Combine. Let sit (preferably overnight in the fridge, covered). And Roberto's your tío.

As an aside, a South American cow-orker shared with me that she's constantly asked by USians what her people do for Cinco de Mayo, which she finds hilariously dumb. As do I.

Several Londoners who frequent the comments section of this very blog should like me to tell you they'll be getting their plates of meat over to the Pakenham Arms pub between 19:00 and 20:00 this Wednesday 5 May. So, if you're in the area, head on by to piss it up the wall or whatever other gobshite you folks get into across the pond.

Lurkers welcome. Hell, this group of mates is so bloody nice, they'd probably even welcome an Irishman!

Carpet is the new pleated pants

What is it with all this carpet hatred lately? There is a type of carpet to hate: the beige I'm-trying-to-sell-my-house shit, same as the beige rental property shit, is ugly. And carpet in the bathroom (or worse, kitchen) is generally a terrible idea. So hate away on those subtypes.

But this carpet hatred of all carpets ever, and fetishization of sparse wood floors with a rug here and there: mark my words, this will mark your home as painfully '10, and you won't even realize it. Carpet is coming back. I bet the hipsters already have it.

Here's another thing that's on its way out: poured concrete. Because it fucking wrecks your joints and makes you tired to stand around on it. Don't do it. Opt for good carpet instead. Soft, that you can watch TV on and play around with the kids on. In nice, bright colors like pine green or a deep rose.

Stress, like weight loss, is one of those things that we're all supposed to keep under control and get admonished about constantly (in, say, women's magazines), and so I hear scientific findings as reinforcing that policing. Whereas depression, historically, was discounted as having biological underpinnings, and so I see reports of longterm health consequences as fighting back against that bias and giving credibility to a debilitating condition.

I have no idea why, historically, people believed in stress but didn't believe in depression. I also have no idea how widely those beliefs are held today. But I've internalized them as norms that we ought to push back against.

At this point, though, stress is still something that is promoted as being self-curable. Remember to put daisies on your table! Remember your bubble bath! Remember your me-time! But depression is not seen as self-curable without outside intervention. Is this a good thing? I suspect it's an artifact of which drugs have been manufactured, and probably has mixed consequences. (Very much like the article which was linked here at some point, describing how, while every culture has mental illnesses, specific illnesses are not necessarily going to turn up in a given culture. So Western illnesses which we believed to be innate and universal weren't, until we went around telling everyone about them, and then they started showing up everywhere.)

Scouring pads! No, I was joking. The real answer is clingfilm.

All of us more or less internetical types are aware of the story about wrapping Roy Orbison in plastic wrap. But I was not aware until now that the person responsible for that story wrote a book on the subject which was noticed in, of all places, the Review of Contemporary Fiction. (I like this: the author "masterfully employ[s] hackneyed literary devices (nearly every chapter ends with a cliff-hanger) and repetitive turns of phrase that quickly grow familiar, then endearing". This is praise for his skill. On the other hand, maybe it's just not that great a book?) The page describing the book and the general news page are also quite something.