Nick S writes: Two pieces that amused me because of their NY specific details.

Hiding in plain sight, however, is the staggering number of e-bike repair shops that dot the city. Like this one on 53rd St. on the east side of Manhattan: [img]

Despite the fact their sign claims they sell e-bikes, this store doesn't actually have any currently for sale. A customer sometimes might sell a broken or old e-bike to the store, who fixes it up for resale. The vast majority of income to these places comes from charging e-bike batteries, while the employees spend the majority of their time on various repairs. The most common e-bikes used for delivery are Chinese-made and often use interchangeable parts regardless of brands though Arrow bikes are "by far the largest," according to The Verge. Anecdotally, I can back this up, at least among independent operators. This is a pretty typical, NYC delivery e-bike: [img]

Though they are often covered in a protective rubber wrapping, this is an Arrow, whose parts can be swapped between a nearly endless number of other brands. Notice the seat is flipped up. This is how the battery is accessed and removed from most delivery e-bikes. This makes charging easier but also theft less likely. The battery packs are, by far, the most expensive component of an e-bike. Most professional delivery drivers have at least two batteries, each costing $1500, with one charging while the other is in use. The driver in the picture above had come by to swap out his battery. Charging their batteries at this store costs $40 per month. While reports on income from delivery apps like DoorDash claim their workers earn $33 an hour, the drivers I spoke with (in admittedly terrible Spanish and with the assistance of Google Translate) say they make $15 an hour, the minimum wage in New York City.

A longer piece on Lea Michele in Funny Girl:

I hear Harvey Fierstein before I see him. The actor, producer, and Broadway legend floats down the orchestra aisle tossing out hellos to acquaintances and fans, then takes his seat beside me, accepts a Blow Pop from a friend, and notes how many gay men are in the audience tonight. It is, indeed, notable. The two most anticipated gay men of any evening involving Lea Michele--her loyal best friend Jonathan Groff and frequent employer Ryan Murphy--are the last to take their fourth-row center seats, mere moments from leading the crowd in its first of seven standing ovations once Michele takes the stage. It's impossible to confirm that the trench coat Murphy's wearing is a reference to the line from Funny Girl about Fanny Brice getting a standing ovation from "one guy in the mezzanine wearing a trench coat," but it must be. Because it would not only be a prophetic reference, but also proof that at least someone in this crowd is feasting upon the turducken of camp, irony, and conflict that is Lea Michele starring in Funny Girl on Broadway (non-Glee category), lest we all get swept away too quickly by the easy comfort of enormous talent.

A combination of Michele's being invited to perform at the 2022 Tonys in a special anniversary tribute with the rest of the Spring Awakening original cast, as well as showcasing her always-charming friendship with Groff in HBO's Spring Awakening documentary in May 2022 opened up a reputational loophole just in time for the Funny Girl cast shake-up. But Michele can't exactly be blamed for accepting her dream role when producers came calling. That ire is better directed toward the industry of people making these decisions, says Chris Peterson, founder of the long-running Onstage Blog and a public critic of Michele's casting. "God love performers," he says, "but in the scheme of things, they have very little power to actually change the industry as a whole."

Heebie's take: They're both fun pieces! Although I'm posting and skimming from my phone (at the orthodontist with Hawaii) and I had to go back through the second piece a little slower to follow what had happened. (Glee really was a cute show; Hawaii likes it.)

This is just a great Venn Diagram: 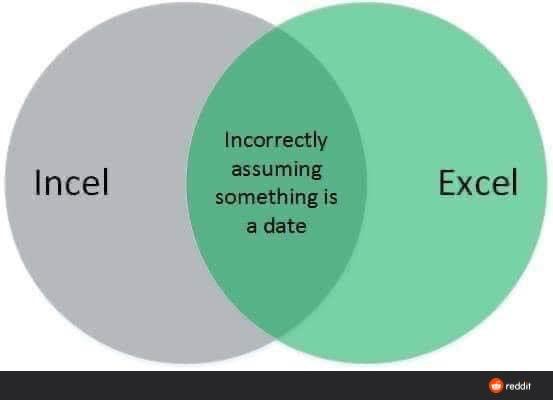 I'm partly just tickled by the juxtaposition of ex- vs in- cel.

Apparently child poverty in the US has dropped dramatically since 1993, from 27.4% of children to 11.4% in 2019. The study chalks this up to several factors, but here's two big ones:

Anyone feel like doing a deep dive into the methodology and confirming or refuting these things? I'm annoyed by the NYT coverage, which includes bits like this:

The plunge in child poverty is the opposite of what most liberal experts predicted a quarter-century ago when President Bill Clinton signed a law from a Republican Congress to "end welfare as we know it."

Conservatives say the landmark law pushed more parents to work and call it the main reason child poverty declined. Progressives say many working families would still be poor without the expanded safety net, which grew in part to compensate for stagnant wages amid decades of rising inequality.

I mean, overall this is amazing and good. I just bristled at the jab at liberal experts.

This says more about my state of mind than anything else, but I saw someone fawning over these things called chirp wheels, which are supposed to stretch out the thoracic region of your back, and I was beset by a deep longing and certainty that these would solve all my problems in my entire life.

They look more appealing than a foam roller because, while both fit between your should blades, they have a better axis of rotation when they're positioned there. If you're lying lengthwise along your foam roller, you can roll side-to-side, whereas this thing will roll up and down the muscles on either side of your spine. Also the cut-out groove for your spine seems really nice.

All this can be yours for the low, low price of $120. Which is more than my price-point for impulsive purchases, so I probably will just feel sad about it. 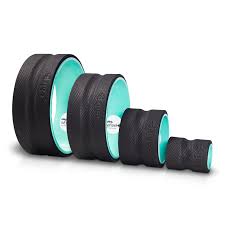 Here's the photo from Men's Journal of it in action: 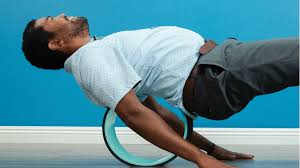 Jeez I want to try it so badly. Not in the exact position of that dude, though. Slightly higher.

I feel like I hear less about Harris than I heard about past VPs. Is she being covered less frequently in the media? Is she less out in the public eye? Am I just not paying attention to the right things?