Solemn but not poker-faced.

I've got a list of potential post topics, but when I sit down to post I get a mighty energy drain and just feel like being honest. Sometimes it seems like posting here requires a brazen confidence, which I have just not been feeling lately. My mom is sick; we just returned from a ten day trip to stay with my parents; I go back to work on Monday and Hawaiian Punch is starting day care; wedding planning is a lot of fun, actually, and I'm totally excited for the weekend, but even a fairly simple wedding still involves a good bit of care-taking. I did get a good night's sleep last night, though.

In a way, I just feel more solemn than usual. Like being silly and jokey is an elevated state requiring extra energy, instead of my default. Also I'm taking things personally, where I used to attribute everything to the other person's baggage with a grand, dismissive, sweep of my hand.

I don't want to overstate it; life can't be summed up in just one mood. It's always a big mushpot of all kinds of moods. But lately "solemn" has been over-represented in my mushpot.

I thought that everybody knew that Chinese restaurants have special menus for their Chinese customers but apparently not. I'm equally shocked that there isn't an entry for "Ordering Off Of The Secret Chinese Menu" on Stuff White People Like.

Nothing about carp, though.

"[...] Sarah Johnson sat in her office across downtown Bismarck and sifted through one of the stacks of rÃ©sumÃ©s piled on her desk. North Dakota's talent recruiter, Johnson, 29, had become one of the state's most ardent saleswomen. She grew up in Bismarck, moved away to Minneapolis, tired of the big city and returned home. What others considered North Dakota's flaws, she regarded only as assets. Cold winters made you appreciate dry, beautiful summers. Quietude sometimes allowed you to hear the distant howl of coyotes at night.

In corresponding with dozens of out-of-state job-seekers each day, Morgan repeated her favorite statistics: The state's economy grew by 7.3 percent in 2008. It ranks second to last in housing foreclosures and third to last in average credit card debt. Mining, construction and agriculture all recently surged by at least 10 percent. The government just passed $400 million in tax cuts.

Best of all were the 9,000 jobs -- a number made even more significant in a state where the population barely exceeds 640,000. Johnson had taken to answering most job queries with a variation of the same response: "In North Dakota," she said, "it is pretty much possible to do anything, anywhere."

I can say this because ogged isn't here anymore

This is pretty, though in this particular case the absence of the bass is felt:

More. Via mefi, where a user links to (I can say this because B is around so infrequently) a surprisingly informative Fark comment about harmony and temperament. (The Fark comments revert to form immediately afterward.)

Update: Since we were talking about Hallelujah earlier.

Produce is of variable quality.

If I were the sort of person who had opinions about tomatoes I would probably endorse Early Girls.

I wonder what would have happened if Obama had never mentioned health care, and yet got a committee to slip in a one-liner into a bill stating that health insurance available to government employees would be available to non-employees. It seems like the type of shenanigans that the Bush administration could have pulled off, if they had been interested in good instead of evil.

This being one of those posts where I realize how woefully underinformed I am within the first ten comments, of course.

I was watching the TV news coverage of the plane crash on the Hudson this weekend and they had pictures of the victims pulled from Facebook. It seems creepy to use people's profile pictures as the go-to pic for their tragic and untimely death, although I guess it's better than the previous standby, their high school yearbook picture.

I'll make an exception to being creeped out if a news agency ever uses someone's Mad Men avatar profile picture. That would be awesome.

Look over there, it's Halley's comet!

Try not to build a libertarian utopia while I'm asleep.

Even though I hate the word "crowdsourcing"

[Update: I'm moving some of this below the fold. Some of his writing is actually quite disturbing, and I'm sorry I didn't read more of it before suggesting we all go frolicking through.]

Having stumbled upon this video I eventually made it back to the guy's blog [NSFW at times and in quite explicit ways], where one of the first things that caught my attention was:

Prepared to dig a bit further, it occurred to me: I know some people who bring a particular set of skills and concentration to this sort of task. Happy hunting, my friends.

The smirk is the best part.

Lynda Corneille is an artist who makes the kind of depictions of floppy, goofy women and animals that really appeal to a certain sort of person. She specializes in teapots, mugs, and trivets. Like this.

Mom and Dad have one of her trivets. It is far, far more awesomer than any of her other stuff. 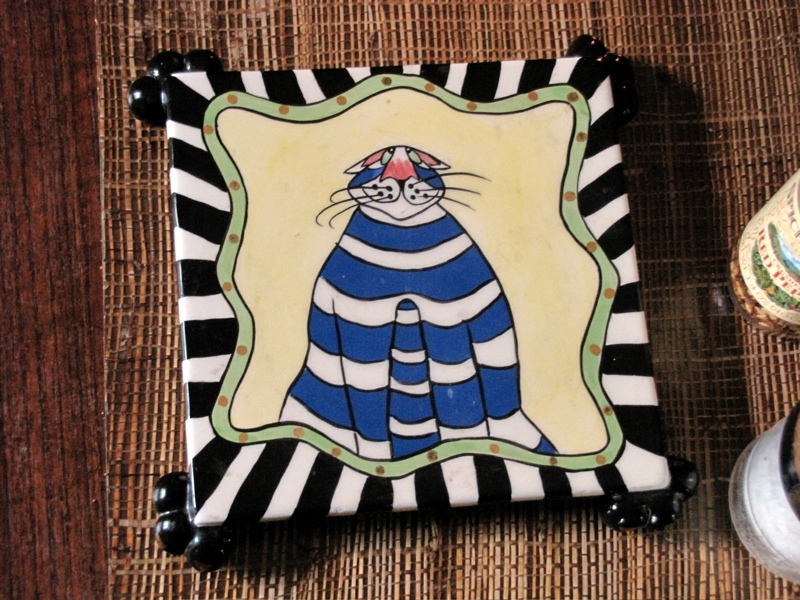 Somehow I'd managed to maintain complete ignorance of Leonard Cohen's "Hallelujah" until just a week or two ago. It's a good song! Since then I've listened to several different interpretations, such as Cohen's own, Rufus Wainwright's, and Jeff Buckley's. Buckley's stands alone among these as having turned me right off, to my genuine surprise. It's turgid and affected. In a genius bit of song-butchery, he stretches out the chorus' final, melismatic "Hallelujah" with a couple of bluesy grace notes -- to wit, "yuh-uh-uh" -- and thereby turns the whole thing into a love song to his penis. His voice is airy and honey-coated; he sings as if to say, "Lean in closer, and I'll tell you a secret" -- and the secret is his cock. Nine out of ten lolcats do not want.

My childhood best friend is now completely off the rails, as I think I've mentioned here before. His mom and my mom have been friends for thirty years. Let's call the mom Emily and the son Andre.

Andre is schizophrenic, full on with the hearing voices and the hey-hey, and suffers from depression, but the thing which sabotages everything is his gigantic chunk of anger. Every living situation lasts about 3-6 months, because eventually the rage of this large man causes one too many blowouts. Sometimes he spends an interval living alone in an apartment that Emily rents for him, but eventually the terror of his schizophenia renders that untenable. He has been living at her house for the last few months, but after an episode this weekend she is kicking him out to the apartment again.

I don't quite know what they've tried in terms of group homes and different levels of institutionalism. I don't really know their financial situation, either, although Andre has never been able to hold a job for very long. I don't know what kind of treatment regimen he's on. I'd guess they've tried many medications, but that he isn't necessarily a cooperative patient.

Mostly I'm stricken by the idea of long-term planning for someone with enough rage to undermine any living situation. I don't think Emily could design a will that would ensure Andre not become homeless. He has two older siblings, but both have small children and are not made of money.

The other thing is that he was a very bright, vivacious little kid, and now the light upstairs is totally off. It's not clear that he's tracking conversations if too many people are talking. This may be partly from the medications that he takes, but also: suffering from mental illness takes a toll on one's brain that's bigger than the illness itself.

As long as comments are hopping, I should note my response to this WaPo article.

At the same time I realize I don't really have a good response to the question of public policy about veils and full-body veils, I also realize I'm not sure what the Christianist response would be.

On the one hand: Ah! Crazy secularists!

On the other: Ah! Crazy Muslims!

Not that I have my own response worked out—I don't. But I'm genuinely curious. Can we maybe distract the birther people with this for a bit?

Next Week: The Hokey Pokey

Last night, as I returned from an investigatory visit to a "dance club", I mused: what about this song makes it so popular as to justify playing it two (2) whole times during my brief fact-finding mission? The question thoroughly vexes.

I should like to advance a hypothesis regarding this matter. Contemporary dancing as found in "dance clubs" in the US is anarchic and, generally at least, inelegant. This anarchy and inelegance causes much anxiety in any would-be dancer. As a result, songs that offer specific instructions (in this case, I refer you to the "to the left to the left to the left"-type portions of the aforementioned song) liberate would-be dancers, lowering the bar to participation and encouraging the further playing of such instructive songs.

In closing, and as an aside, I'd like to make special mention of the song's drum beat, which is quite clever. During the chorus, the use of the bass frequencies is very miserly. This sparse use of low frequencies creates a suspense that drives the song and keeps one's booty a-shaking, as it were. I very much like it as a technique.

The above is the first paragraph of a book the local Spanish language bookstore sold me when I went in with Newt, and asked if they had children's books, anything they'd recommend at about a third grade reading level. It's called El Rinoceronte, and had a picture of a rhino in a car on the cover -- it looked perfectly age appropriate, so I bought it (Newt has to do a book report on some book in Spanish over the summer) and went on about my business. On sitting on a park bench with Newt and puzzling through a couple of paragraphs, I now believe it to be a self-help book for adults, on better living through acting like a rhinoceros.

I submit to the assembled multitudes that anyone could have made that mistake. Really, how could I have known?

Hey LA! Let's have a meetup! On the 13th, preferably somewhere near West Hollywood!