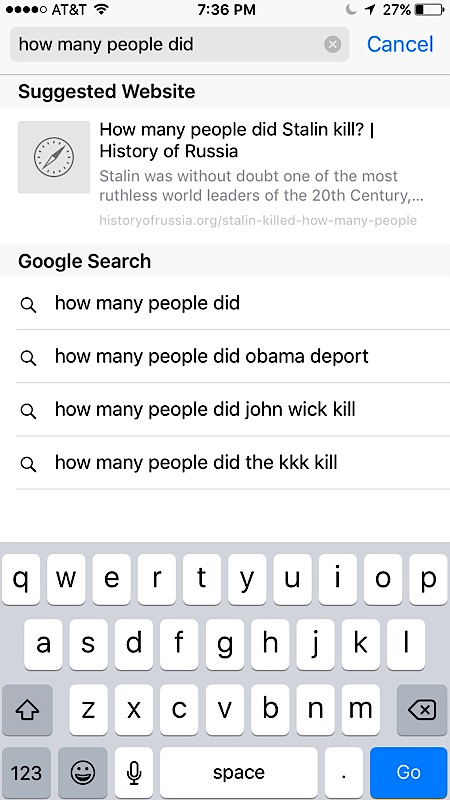 Sure enough, I was trying to describe John Wick to my wife, and was searching for some precision. As I told her, the movie is horrible in so many ways, but I'll probably watch part 2. Keanu Reeves is not a very good actor, but he's a fantastic movie star.

This is a good week to bring it back, I think, with the all the mind-boggling fantasy destruction packed into the moral failure of a budget proposal. They are getting a hard-on making liberals dance to stomp out all the fires. I hate these wretched shitstains so much.

My personal ire spiked inexplicably over the relatively minor detail of Tillerson using a pseudonym to discuss climate change over at Exxon. It truly doesn't matter how much of the climate denialists are true believers, how much is opportunism, and how much is just hating liberals, and I should always assume an oil exec is in the second category without any additional information.

I'm guessing that the left-sympathising football player who said he didn't vote didn't buy either of these. Seeing say unflattering images of the Clintons or Obamas widely forwarded on social media doesn't really affect me. The blank book makes me kind of sad, I think because I like physical books, I see even bad ones as a kind of symbol of decency. Yes I did see the Chuck Tingle discussion here, but I did not participate. That said, if a spiteful joke is #1 on Amazon, Walmart must be moving tons of them.

The portraits are different to me, mentioning them mostly because this was another peek at life outside my bubble in the same place.

Heebie's take: The first link above is "Reasons To Vote For Democrats: A Comprehensive Guide". There's also this one, Why Trump Deserves Trust, Respect and Admiration, resting on the same gag, also doing well, apparently.

Reading Scott's The Art of Not Being Governed,* I was struck by this:

a distinction in political status is ethnically coded as if it were a fundamental difference in kinds of people and not a political choice. It means that all those who had reason to flee state power, for whatever reason, were, in a sense, tribalizing themselves.
[...]
Up until then [roughly 1900, in SE Asia] a life outside the state was both more available and more attractive.

Could it be that the self-constructed tribe of Republicans has, somewhere in the incoherent swamp of its ideology, a strain of anti-statism descended from a folk-memory of Reivers in the hills, become rednecks in Appalachia, who have failed to notice that in the intervening centuries the state has ceased to be solely a taker of slaves and levier of contributions?**

*In short he says that, historically, "barbarians", especially those in inaccessible terrain, have often chosen to live that way in order to escape the exactions of the state.

**Written in blissful ignorance of Reivers, rednecks, and the reality or reification of Scots-Irish folkways and the frontier in American history.

That's James C. Scott, of course. I have not read The Art of Not Being Governed, but he says something similar at various points in Seeing Like a State. Anyway, have at it.

So are we revisiting our conclusions about the Michael Brown case? I honestly can't remember what facts we had all agreed to, as the ground floor of our arguments, but here Darren Wilson admits that Brown never tried to grab his gun.

Could Maddow have them and could they be as bad as I could ever dream???

This better be good.

A friend of mine is being Chicken Little about this executive order, and I can't tell if the sky is actually falling or not.

I think Trump is either impeached or reelected. I feel pretty sure about that.

Off to the amusement parks for the day! Lalalalala.

I see no angle from which this isn't suicide for Paul Ryan.

If Trump tries to shill for the bill as-is, then we can forever retire any 11-dimensional chess narratives.

If, on the other hand, this is a set up to destroy Ryan and/or let Trump play the hero who killed or changed the bill, 11 dimensions...maybe!

The prodigiously messy one writes:

I've been spending my non-bedridden days making monster dolls out of fake fur and lycra, and selling them on Etsy. Surely there are several readers of this fine web log who are experiencing a very stressful paucity of artisanally crafted monster dolls in their environs?

Also I need names. I think Ydnew, for example, would be a great monster name. Wikipedia has some good lists of cryptids and things like that, but it turns out not all traditional monsters are appropriate for a child's toy. Additional suggestions of any sort are welcome.