Bleg: Ace is putting together a playlist of angry songs. What are some upbeat, wholesome angry songs that are just a lot of fun to rock out to? I bet you all have some good ideas.

So, spell this out for me. Trump hid nuclear secrets in Mar-a-Lago in order to...sell them? to Putin? to the Saudis? and we may find out a lot more at 3 pm?

Okay, social psychology is so overwhelmingly difficult to quantify, and the replication crisis is so pervasive, that I'm only posting such a thing with a smile and slightly sardonic expression:

Sure enough, Poulin found that the effects of the meditation depended on people's existing attitudes. If they were already interdependent, then the people who took the mindfulness exercise were willing to spend much more time on the charitable task; overall, they stuffed about 17% more envelopes than the control group. If they were independent-minded, however, the exact opposite occurred - the mindfulness had made them even more self-centred, so they were less willing to help the homeless. Overall, they stuffed around 15% fewer envelopes than the control group.

To be sure the finding was robust, Poulin's team conducted a second experiment, in which the participants were first given a short text written either in the first-person singular (I), or first-person plural (we). As they read the text, they had to click on all the pronouns - a simple task known to prime either independent or interdependent thinking. They then completed the meditation tasks and, to test their pro-sociality, were asked whether they wanted to devote time to chat online with potential donors for the homelessness charity.

So mindfulness is like a thermos: it keeps warm things warm and cold things cold. Americans are generally more independent-minded, according to the lore. 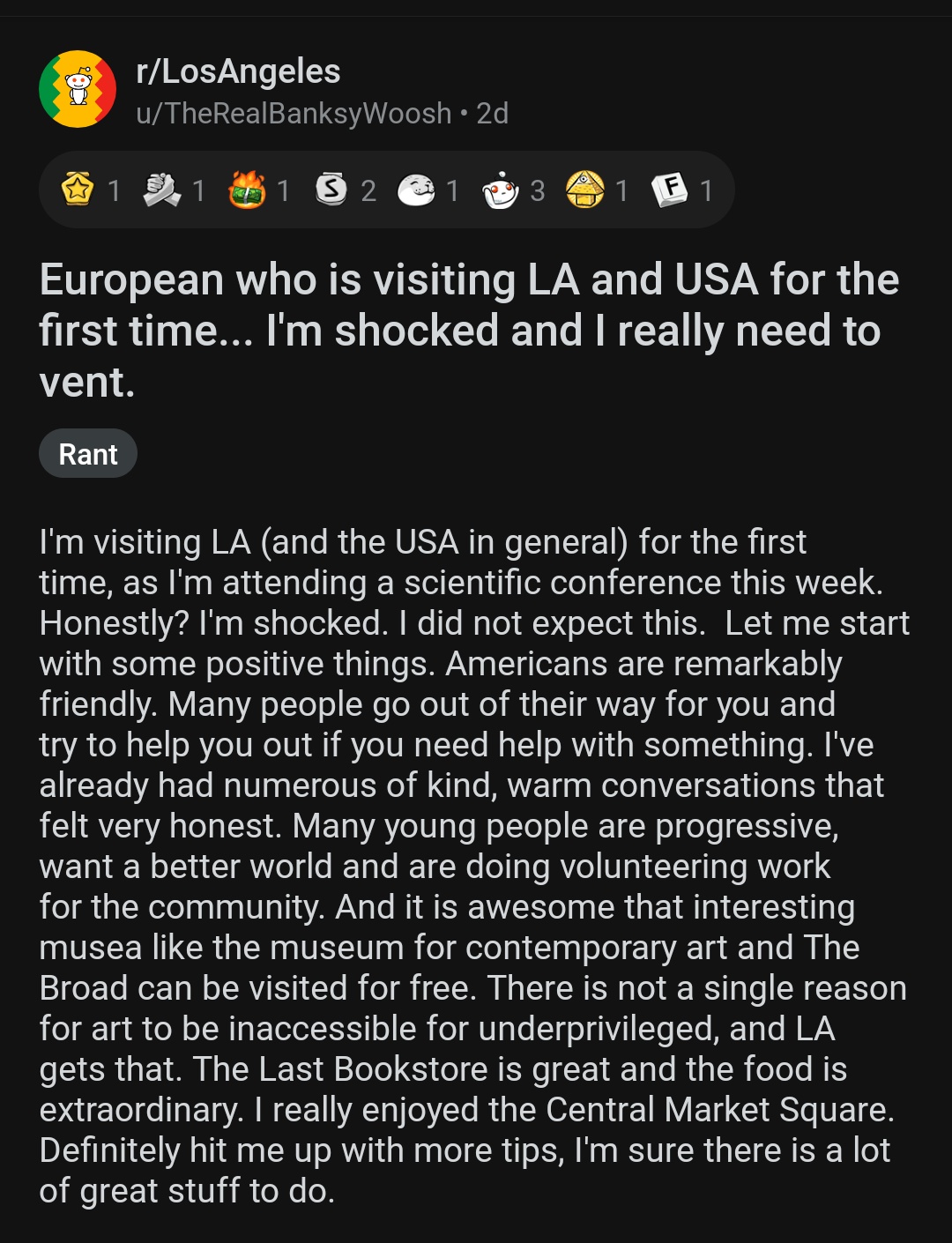 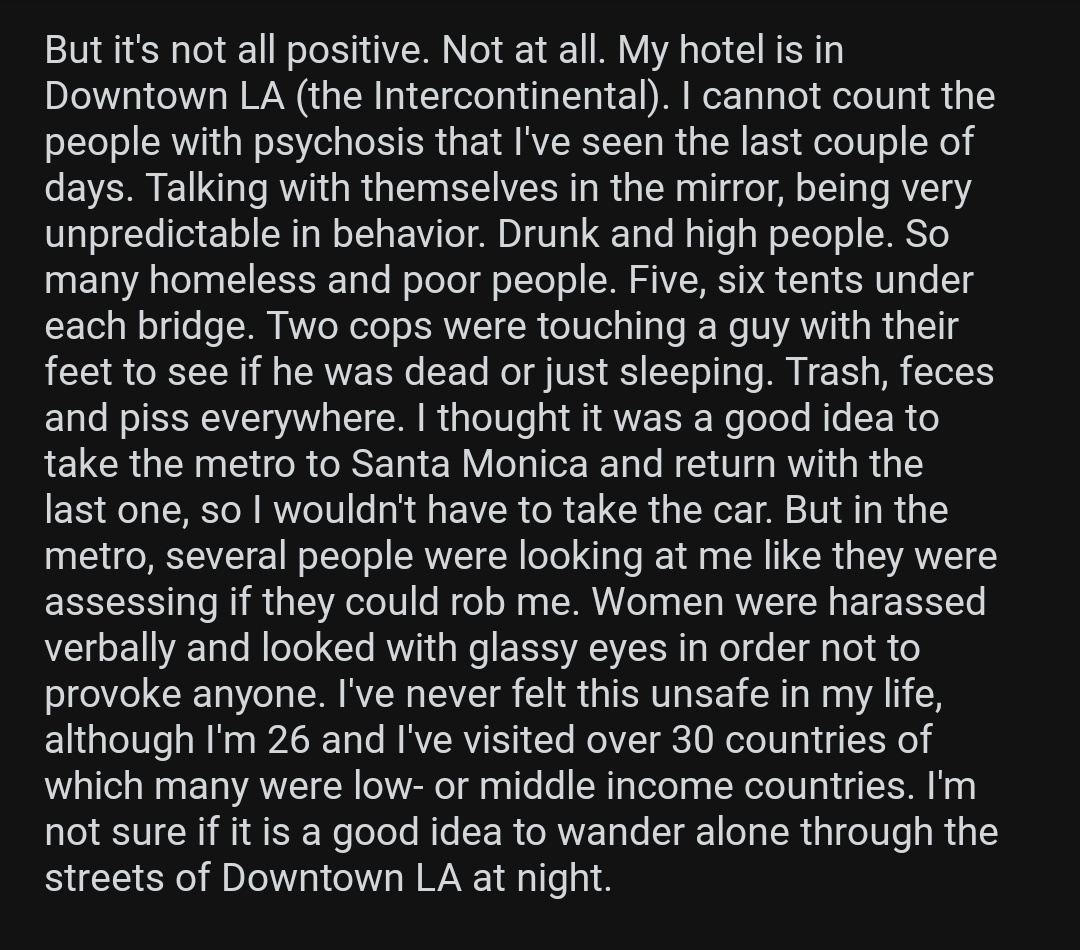 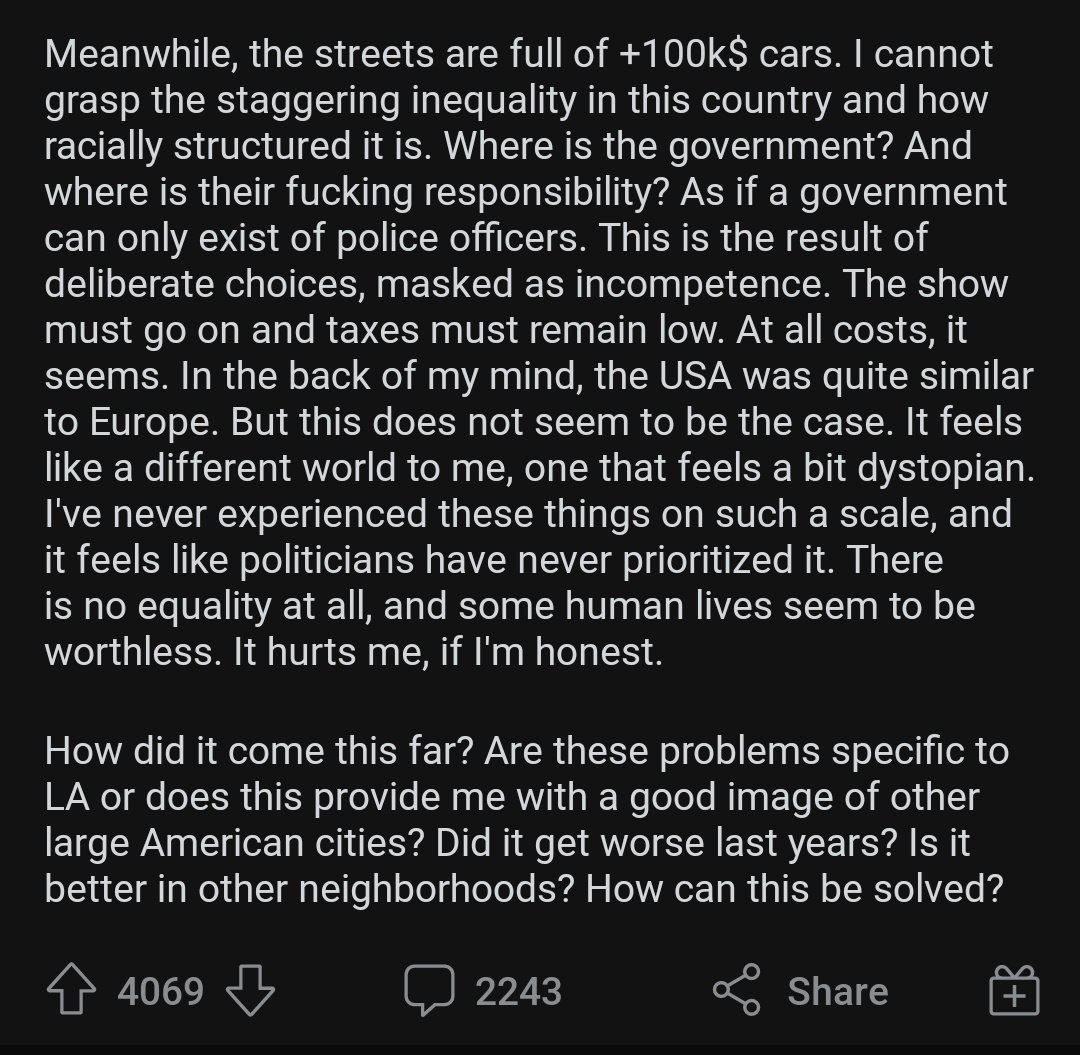 It's crazy to think that in cities across America, mayors, council members and thousands of bureaucrats all walk into City Hall every weekday morning thinking "How can I do the shittiest job imaginable today?"

It's amazing the holes that humanity can dig itself into.

There are literal photos of Trump's handwriting on paper in the toilets of the White House, waiting to be flushed? That he didn't get around to flushing?

Mossy Character sends in Chinese Feminists Caught Between a Rock and the Party:

Knowing that openly suppressing feminist discussions online might spark unrest and undermine its founding myth, the CCP adopts an indirect suppression strategy. The party effectively exploits the looming gender tensions to delegitimize feminism. It actively stigmatizes the movement by appealing to nationalism and labeling feminism as "extreme." The All-China Women's Association warned that "hostile Western forces" are using feminism as an "ideological weapon" to create social cleavage and undermine the Chinese political system.

The goal of this stigmatization is to delegate the task of online suppression to men and other anti-feminists. The government intentionally allowed, and even encouraged, cyberbullying against feminist online users to silence them. Many anti-feminists, some of them sponsored by the government and known as the "50-cent Party," use nasty words, threats, and even "human-flesh search (äººèæç´¢)," which exposes others' private information such as addresses and ID information, to attack feminists.

(I love this dry anthropological touch:

It is important to note that this phenomenon is not exclusively Chinese; in the United States, where feminism has a long development history, gender inequality issues ranging from WNBA players' pursuit of equal pay to the confirmation hearing of Supreme Court Justice Brett Kavanaugh could spark intense gender-based conflicts online.