Mossy character sent in Chinese demand is fueling donkey theft and stressing out farmers in Ghana but he didn't have anything to say about it, and neither do I, except that it's concerning. I panic easily and helplessly over this kind of thing.

Mossy also says, "And Austin has an Eeyore festival?"] 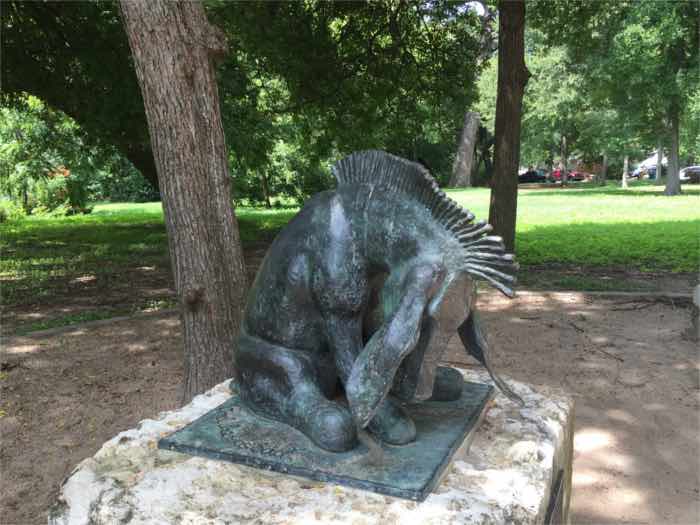 To which I can confidently say: yes! It's Eeyore's Birthday, and it's roughly around 4/20 every year, and as of the early 2000s, it was a very hippie scene.

Michael Harriot does the best explainer threads. Scroll through his feed and you'll learn a bunch about black history.

But I have to say, I cannot believe we're going to nominate this guy.

"By the way, are you gonna stick with President on the following, President [awkward pause], the last guy, on this issue?"pic.twitter.com/SUUXnsJpwy

Dave W writes: The past 3 days I've been at a significant international tech conference in the Bay Area. We already knew that the Chinese presenters weren't going to be able to attend. But there's more. Two of the three primary corporate sponsors have pulled out with all their people, although they have gone ahead and sponsored the lunches where they were going to feature discussions of their new products. Yesterday, I went to a talk where the speaker from another company wasn't able to attend because of a corporate travel ban - one of his coworkers from a local site defied corporate policy and took his personal time off to come and set up a WebEx so the speaker could present remotely. Other people from other companies are here, but looking a bit nervous. Little bottles of hand sanitizer are the hot conference giveaway. The conference has cut back from the planned four days to three, and rescheduled a bunch of talks to
cover all the gaps.

I feel a bit like I'm in "the revolutionaries might win" scene from Godfather II. Nothing definite yet, but all these reactions can't be good for the hospitality industry, and I'm wondering how much it would take to tip the economy into a full-fledged recession. Seems like the canaries are reacting pretty strongly in this particular coal mine.

Heebie's take: it just occurred to me this morning what it might be like to be quarantined for two weeks. Immediate thoughts:
1. The cabin fever, oh god.
2. A lot depends on how much advance notice we'd have to acquire groceries, etc. (Presumably not much, but it wouldn't be crazy to do some minimal advance planning.)
3. If we were caught flatfooted, then everything depends on Amazon (or a hodge podge of delivery services). If Amazon is functioning and delivering goods, then it's pretty bearable. If the delivery industry goes into hiatus and we haven't planned, then it gets into nightmare territory.
4. Presumably my job and the schools would try to cobble together some sort of virtual learning situation. The idea of trying to get my job done online while the kids are home is also terrible.
5. Would all the streaming and online things function just fine? Is there any reason why Netflix and Hulu would crap out?
6. Would I attempt to maintain a schedule with the kids? "At 10:30, we all do 50 burpees and then resume watching movies"? Would this make things better or worse?

I think this would be a good time to buy stock in online streaming services, DisneyPlus, and home delivery services.

I'm also semi-responsible for a conference being held in three weeks. Not much to do except wait and see how similar situations get handled, and follow suit.

"Tell Micah that his parents are full of shit and don't respect the rights of Palestinians."

Then my wife intervened and told him he'd never be invited to another playdate if he said that.

I also told the boys that if they picked their noses they would kill their grandparents. I think that was on the CDC site.

I might be catastrophizing, but I feel like I'm living in the Before Times, and this veeeery slow-moving wave is about to wash across the country, and life will look quite different for some time. It's not like a 3.4% vs. 1.2% mortality rate is going to make much difference to how much people freak out. I'm expecting closed schools and cancelled travel and bare shelves, at the least.

Ugh, I feel so glum. Tell me a frivolous distraction from your life. Or vent about a bad thing. I just want a thread with break from politics. Is there a health fad I need to try?

This is sort of a cop-out for a post, but I was skimming and skimming headlines and such, and everything is just hammering on the same few themes.

Something to riff on, maybe

My programming retreat (a context also shared by another commenter on this blog!) is starting some sort of public newsletter and they have written me to invite me to draw a cartoon that will be fodder for a caption contest. I don't know why they picked me, since there are several other known cartoonists in our number, but maybe the other folks said no, or maybe they are randomly cycling through us.

Anyway, I need help thinking up a concept for this cartoon. I know it goes without saying that it should go well with the caption, "Christ, what an asshole." Ideally it should be something to do with programming somehow. It's kind of a tricky challenge because it's difficult for something to be all of: visually interesting, about programming, and open enough to interpretation that people can come up with different captions.

Some very vague ideas I have so far include:

Some baby birds in a nest of if statements. Maybe with some kind of predator nearby? Or their mom regurgitating into their mouths? Or both?

Similarly, Lady and the Tramp eating some spaghetti made of code fragments.

Or maybe someone at a crossroads with the direction they must take determined by a ternary operator? Like maybe this could be a metaphor somehow and we could see a godlike figure who determines the poor little variable's identity?

I dunno. It's hard. Help me come up with ideas?

Why not donate to the UCSC strike fund?

You can do it here.