On This Day Of Change...

1. In the Activism thread, Megan posted a link to a video of a guy talking about how a white woman pulled over to record him at a routine traffic stop, just in the course of being a racial ally. I have also had the experience where I make sure that I have my phone in hand, ready to record, in case anything looks like it's going to start happening. There was even an app for awhile that was like a big green "Emergency" button that would start your phone recording and uploading to the cloud, IIRC.

Having your finger on your phone is not at all like having your finger on the trigger of a gun for protection, because it's not a delusional cowboy fantasy for starters, but there are some parallels:
- the sheer sensation of adrenaline and having a magic weapon in your pocket that can give you more power as a bystander, and putting your hand on it in advance, to be ready on a dime
- the belief that you personally are not in danger, because either you're not the target of the violence or you have utter faith that your gun makes you safe
- the knowledge that if you pull your device/gun out visibly and obviously, it changes the dynamic and escalates things the situation, and you have interjected yourself into the charged situation.

I guess what I'm saying is that in those instances where I've made sure I've had my phone nearby, the feeling of an "itchy trigger finger" really does fit. As well as the tense understanding that if I were to start recording, it's going to be taken as an adversarial act, and I should be prepared for confrontation.

HOWMEVER, I am not feeling any sort of allegiance with dumb pricks who bring guns to public places. I hope it's clear that I'm saying that phones ought to replace the functionality of guns in these situations. The major difference is a grounded understanding of how the device/gun will serve a role in justice as the conflict draws down.

2. Obama talks to the YouTube music twins. It's very sweet.

3. I had a post about how now that there's a vaccine on the horizon, it's easy to get senioritis about staying safe. How jailbreaks tend to happen in the last month before release, which may be a total myth but is definitely something that I've heard stated authoritatively. That the problem facing the world is just convincing people to hang on a little longer. Don't ease up now, now that the finish line is visible.

However, it was so patently false that I couldn't even write the damn thing all the way through. Clearly the promise of a vaccine has very little to do with the atrocious lack of compliance and utter death wish that we're witnessing.

A friend of mine got remarried last spring. She knew her husband's job was low-key, but over the course of Covid it's become clear that he makes boatloads of money for barely working. He's sheepish about it but not troubled, which I don't judge him for, exactly. (Or maybe it depends on my mood.) She works very hard in typical academic ways.

There's not exactly a problem to be solved or anything to be done, but it's a very interesting dynamic, in my opinion, and I would maybe find it infuriating to be in her shoes. I'm not sure. In general, I find the asymmetry of workload in society to be galling, and it would be hard to have it right in your face all the time.

I feel like I'm missing something - why exactly is Trump pulling troops out of Afghanistan and Iraq at this point? He only does things to punish or reward 3rd parties (or himself), but I'm not clear on who is the actual recipient.

A friend of mine (not the author) posted this to FB: 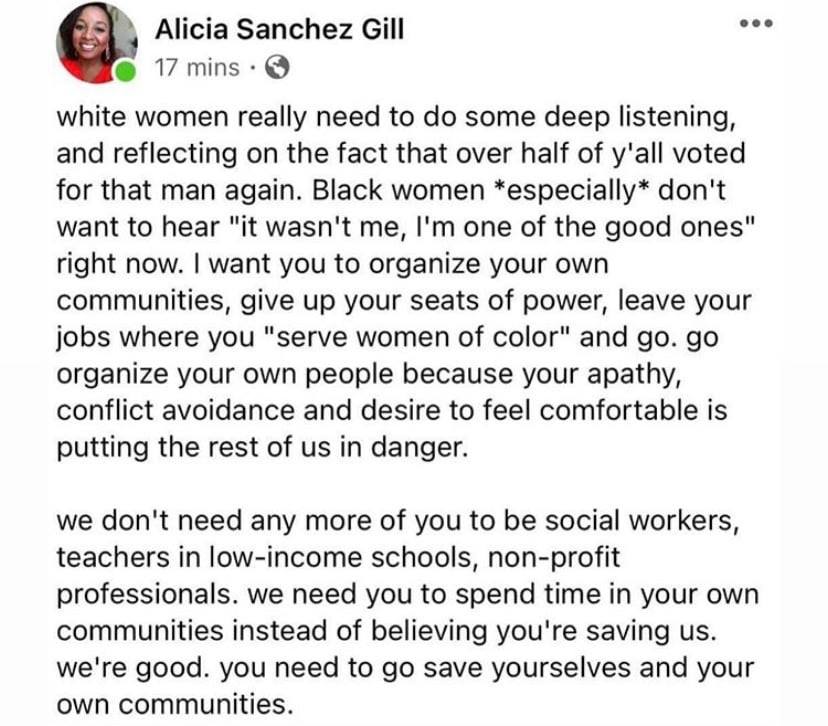 I get the point - that white people need to focus on changing white people - and it is accurate. (Maybe a general principle would be to support community of color financially while working to change communities of white people.)

Nevertheless: it puts this image in my mind that I am duty-bound to move to a tony suburb, seek out and join all the most status-quo-solidifying* organizations, and try to change them from the inside out. That has got to be the worst, most unpleasant-sounding form of social activism I've ever been asked to contemplate.

The world of luxury goods is just straight up peacockian, for the most part, and I say that as someone who enjoys clothes and thinking about what to wear. Designers ought not have their work stolen, for sure. On the other hand, the pricing of high end items is driven by all sorts of silly status considerations that only have a tenuous connection to the designer's skill, and the quality of the item. (I will never not be delighted by the person I knew who got very angry when they were gifted Uggs from a different website than the one they had requested, because they "wouldn't be able to tell if they were real or if they needed to be returned.")

[E]arlier this year, the founders of the online marketplace Tradeewatches debuted Watch Certificate, a steel card with a QR code that links a watch to its digital certificate on the blockchain.

Although it's kind of funny that it requires a tangible steel card with a QR code. Isn't that the part that should be faked, then? You'll need a separate QR code with blockchain identification for your steel card. It's QR codes all the way down.

This next part is some dystopian shit:

[I]n September, Origyn, a nonprofit foundation based in NeuchÃ¢tel, Switzerland, announced that it was taking data digitalization a step further.

"Origyn offers a digital certification system that allows any user to authenticate any luxury product immediately with a high-resolution photo taken with a smartphone," said Vincent Perriard, a co-founder of Origyn and former chief executive of the watch brand HYT. The company plans to introduce the Origyn app in mid-2021.

"The biometrics of the watch become its own certificate of authenticity," Mr. Perriard said.

The app, which he called a kind of Shazam for watches, would eliminate the use of markings like an engraved inscription or documents like a brand certificate in establishing authentications, the company said.

This is literally Star-bellied Sneetches territory. I must know who is authentically my peer, and who is able to duplicate all the signals so identically that I may not realize I'm being tricked. I need an app to shine at people's wrists and authenticate if they're playing the same status game as me, or a slightly different status game than I'm playing. It all sounds very exhausting.

(I will just say that I am skilled at judging people while exerting much, much less effort.)