Unsatisfied with being both Christian and Muslim, Obama is adding elements of Judaism to his religious repertoire, in a kind of triune Abrahamic hat trick.

Last year's was the first "Presidential Seder" (meaning the first a president has attended? First in the White House?), apparently. Isn't that interesting? Wouldn't you like to know, like, why the Obamas held one, or why Obama dropped in on a three-person Seder the year before? Mightn't that be, you know, potentially interesting—more interesting than, say, whether or not Sasha and Malia will ask the questions? Is the author of the article alluding to the relative prominence of the Exodus story in African-American culture when she writes that the guests are "mostly Jewish and African-American"? Who's the woman in the shawl in the topmost picture?

Plenty of cartoons are in poor taste, but this is the only one I can remember which successfully offends me. Like, I'm angry about it. Which is kind of annoying, because it's like I was successfully trolled.

"Fucking Aaron Burr's not on the money. You know who is? It's Alexander Hamilton. He's on the ten."

A friend told me ages ago I had to check out Drunk History, and I foolishly ignored him. Don't make the same mistake.

(Hat tip AWB, who reminded me that I should watch this.)

Under the fold, a gratuitous, unattractive, and possibly even somewhat disturbing picture of cake. 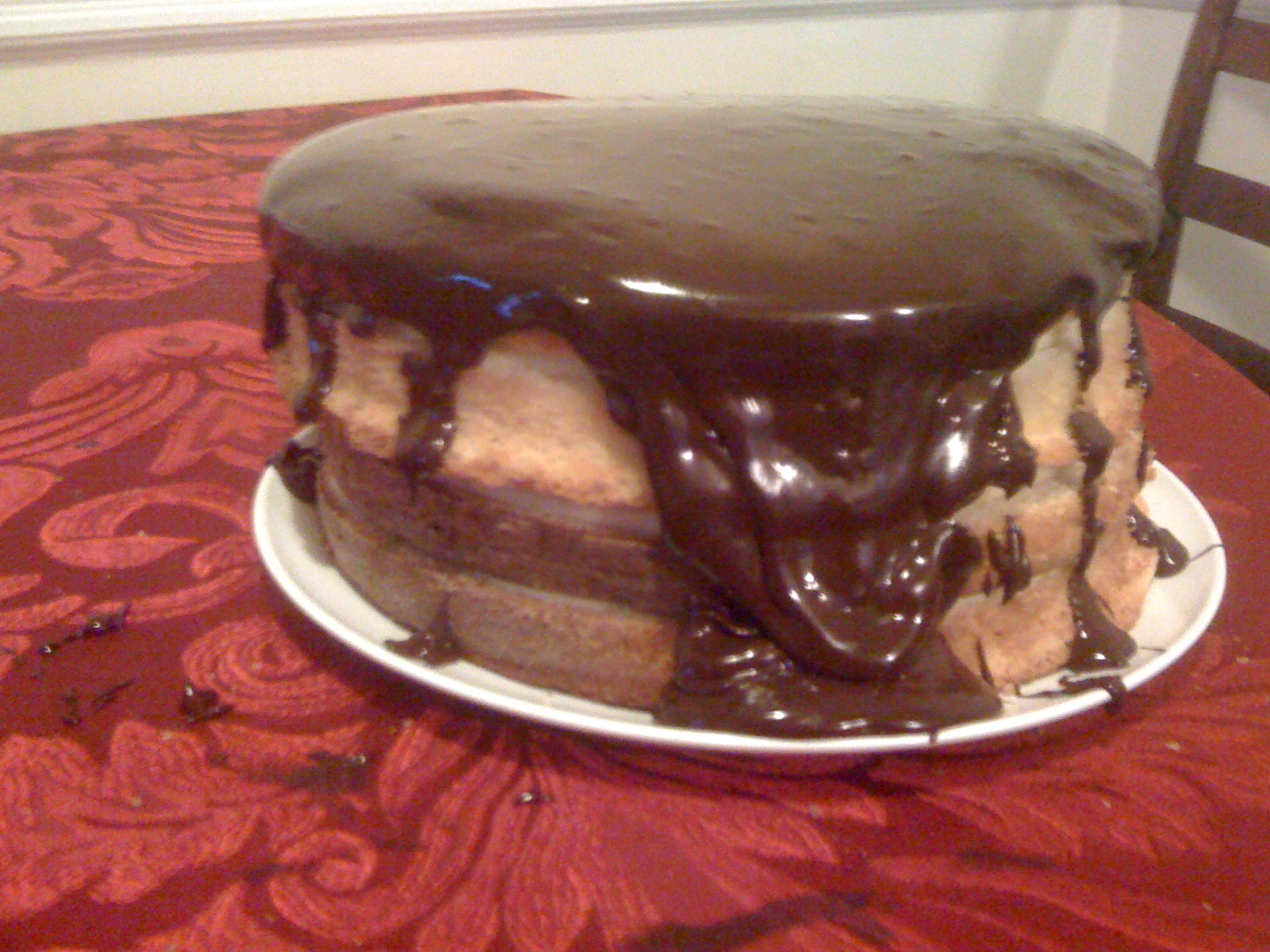 A post at An und für sich about working from home.

A rock band is an economic actor.

First off, this is outstanding, and Sir Kraab is a harmonious individual of pure motives for having sent it my way:

He started a service called Eternal Earth-Bound Pets that promises to rescue and care for animals left behind by the saved.

Promoted on the Web as "the next best thing to pet salvation in a Post Rapture World," the service has attracted more than 100 clients, who pay $110 for a 10-year contract ($15 for each additional pet.) If the Rapture happens in that time, the pets left behind will have homes--with atheists. Centre has set up a national network of godless humans to carry out the mission. "If you love your pets, I can't understand how you could not consider this," he says.

Centre came up with the idea while working on his book, The Atheist Camel Chronicles, written under the pseudonym Dromedary Hump. In it, he says many unkind things about the devout and confesses that "I'm trying to figure out how to cash in on this hysteria to supplement my income."

Whatever motivates Centre, he has tapped into a source of genuine unease. Todd Strandberg, who founded a biblical prophecy Web site called raptureready.com that draws 250,000 unique visitors a month, agrees that Fido and Mittens are doomed. "Pets don't have souls, so they'll remain on Earth. I don't see how they can be taken with you," he says. "A lot of persons are concerned about their pets, but I don't know if they should necessarily trust atheists to take care of them."

The atheists! Not to be trusted!

Anyway, this pet story totally contradicts my second-grade understanding of where pets go when they die (Sasha and Lara? Our cats who died after lives of loyal cattitude? Totes went to heaven. I was told so by my mom, so it's true.)

So now I'm just stuck deciding which premise is more absurd: that pets do go to heaven or that they definitively don't.

For the modern deracinated (“assimilated”) Jew, the appeal formerly held by the shiksa has been transferred to overtly Jewish or Jewish-looking women.

Yes, that's right. I did just use the bare "Jew" as a stand-in for "Jewish male". Also please note that this is not a generalization from a single instance.

Today's Diane Rehm Show frustrated this listener. It was, in fact, excruciating. It excruciated me.

They had a panel of experts, who (gasp!) fielded questions and explained, in detail, what's in the recently passed Patient Protection and Affordable Care Act. (You may have heard of it.)

It feels sort of obvious to point it out, but the conversation went so far off the rails on this healthcare debate. I'd like to hope that at least some corners of the media world learned a bit of lesson. After all, here's a well-respected radio panel show doing exactly what every media outlet should have been doing a lot more of during the last fourteen months.

But I'm skeptical, and I fully expect many future political debates to head off to la-la land. Sigh.

When I was young and misunderstood

I recently read a parenting tip: always mentally assign the best possible motives to your children. This seems like good advice. My parents did this, and at worst they were a bit gullible around whether or not we had watched TV or practiced piano.

I have one vivid memory of an adult - a teacher - assigning awful motives to me, when it was totally undue. It's a weird story and I was really upset about it for a very long time.

In 5th grade, in maybe February, we were in music class. The teacher told us that the 4th and 5th grades were going to put on a musical for the end of the school year. The 5th graders would be the actors and the 4th graders would be the chorus. There were about fifteen roles and thirty 5th graders, and they were going to have two separate casts, one for the school performance and one for the evening performance. So everyone who wanted to could be an actor. Despite this, there were to be tryouts, which was terribly exciting. Otherwise you could join the 4th graders in the chorus.

Next she played us some songs: "Chicken Soup with Rice", "A, Alligators All Around", and some others. I recognized them and said so. It turns out there's a musical built out of the Maurice Sendak poems, called Really Rosie. I was very excited. I did a good job promoting the choice to my classmates.

We had about a week before tryouts. I had my heart set on being cast as Alligator. No one else was trying out for Alligator. I thought possibly I might get cast twice, and get to be Alligator in both the matinee and the evening performance.

Then Casey said she was trying out for Alligator. That seemed fine. I was pretty sure she'd get cast over me for the parents' performance, but whatever.

At the last minute, Valerie mentioned that she was going to try out for all the parts. Valerie and I were friends, but I had this sinking clarity that I would not get picked for Alligator if both Casey and Valerie were trying out. I asked Valerie if she'd mind skipping the Alligator part, and she said no problem. We were friends; she seemed to also know that I'd get passed over if she was there, and she didn't really want to be Alligator.

So in the end, only Casey and I were trying out for the part. We auditioned.

When they posted the parts, Valerie and Casey were awarded the two roles of Alligator. Valerie had another character, as well, so she'd be two different parts, one in each performance. Valerie had no idea why she'd been cast as Alligator. I was not cast for anything, and in fact I was the only person who had auditioned and not been cast.

It turned out I was in trouble for bullying. I argued with the teacher and tried to explain, but got in trouble for back-talking. I feigned bravado but I was really very upset about the whole thing. For two months of rehearsals, me and one or two shy kids sat around by ourselves, since the fourth graders had a different music class.

The story has a weird ending.

A week or so before the shows, the few fifth graders without roles were taken aside and the teacher explained that we'd have special prop jobs. We'd have props with us in the chorus, and when the lights dimmed at the appropriate time, we'd slip out and set up our prop, and return to the chorus.

I was given a collapsing director's chair that Rosie needed, as she directs a mini-play in the course of Really Rosie. I practiced keeping the chair out of sight while we sang, and then slipping out and setting it up at the right moment.

I was humiliated and crushed and unbelievably upset. I feigned bravado. I bragged that I got to wear jeans and a t-shirt while everyone else had to wear stiff clothes.

In hindsight, the whole story is weird. It is possibly the most malicious thing an adult ever did to me when I was growing up. (Of course, that is a testament to an otherwise happy childhood. But I still hold a grudge over this one episode.)

Also Spring Break is over.

Hawaiian Punch is exhibiting a big preference for Jammies over me. It's hard not to feel jealous.

I would much prefer mild commiseration and anecdotes from other people's lives over tips on how to solve this. There's nothing to solve, and I'm not deeply rattled. I'm just sharing. (Perhaps it's wrong to taunt the mineshaft with a problem that is not to be solved. You could solve the dilemma of the taunted mineshaft if you're feeling untethered.)

Also our faculty search is going very badly, which is totally demoralizing. I probably shouldn't provide too many details, though.

The tragedy of the wealthy is their pervasive, unshakeable fear that others only love them for who they really are.

There's a bit of a kerfuffle over whether Joe Biden dropped the F-bomb ZOMG! when introducing Barack Obama. If that is what he really said, is anyone really surprised at someone using this kind of one-to-one, salty language? Or is the surprise that Biden had not the sense not to do so within, um, mic-shot?

Seems like a buncha motherfucking clutching at pearls, really.

A good bit ago, NickS sent me this video about the making of a Steely Dan song ("Home at Last"), and it totally just fell through the cracks. But it's interesting! And I have a related-ish anecdote!

A group of friends of mine one night conceived of a Steely Damnbulance, in which the members of Steely Dan ride around (the siren plays Steely Dan riffs, duh) trying to find and save instances of music that's not smooth enough. It amuses me to no end.

Anyhoozle, enjoy. (And sorry to NickS for the seeming link snub.)

Around vote time tonight, I'll be playing indoor soccer. While we're hanging out before or after, no one will mention the health care vote, and if I mention it, no one will really respond.

I feel nervous about the administration taking on immigration reform. If we thought that the Tea Partiers and Associates were frothy over health care reform, imagine how threatened and persecuted they're going to feel when Obama broaches a humane approach to problems of immigrants.

If it goes like health care reform, concessions to the extremists will be incorporated into the reform, and then no Republicans will vote for it anyway. But here, concessions will be cruel, inflammatory, and generally xenophobic punishments for people associated with undocumented workers.

Is immigration too immediate and big to postpone? Is it desperately obvious that we must do something about it now? Or should we quietly foist the issue off until a later administration?