I think this is fascinating:

Stanford University researchers looked at data from Civil War soldiers and veterans and two more recent cohorts to confirm that body temperatures among American men averaged around 98.6 degrees F back then but have steadily fallen over time and that temperatures among women have fallen as well. Their data find an average for men and women of 97.5 degrees F.

I've known for at least a decade that I hover in the 97s when I'm feeling fine, and that 98 or 99 is a slight fever for me. But I always attributed it to science not properly using data from women when computing averages. I find it bizarre that we're actually cooling down as a whole cohort.

Parsonnet says she suspects it might be healthier to have a lower metabolism and body temperature. And she hopes to explore that connection more in the future.

They don't go into why it's healthier, but at least if it's a good thing, then this one scientist isn't saying that it's punishment because we're all lazy shmucks who deserve the hellscape we've built for ourselves. That's nice.

Mossy sends over this link about India's new controversial citizenship law, and leaves it to me to eke out something intelligent to say about it. Well, I can pull quotes intelligently:

There is another dimension to the protests across India--its implications for Indian citizens. Most centrally, protesters are worried about the combined effects of the CAA and the government's controversial plan to create a National Register of Citizens (NRC). The basis for the NRC comes from both a 2003 amendment to the 1955 Citizenship Act and the rules issued in 2003 to operationalize the amendment. However, until recently, limited steps have been taken toward the implementation of the register. The NRC will reportedly require every individual across India to demonstrate that they are Indian citizens through certain specified documents. Under the NRC, individuals will have to show proof of their residence and date and place of birth as well as the citizenship of their ancestors, going back to a cutoff date specified by the government.

Here's a depressing one:

Virtually every Amish victim I spoke to--mostly women but also several men--told me they were dissuaded by their family or church leaders from reporting their abuse to police or had been conditioned not to seek outside help (as Sadie put it, she knew she'd just be "mocked or blamed"). Some victims said they were intimidated and threatened with excommunication. Their stories describe a widespread, decentralized cover-up of child sexual abuse by Amish clergy.

"We're told that it's not Christlike to report," explains Esther*, an Amish woman who says she was abused by her brother and a neighbor boy at age 9. "It's so ingrained. There are so many people who go to church and just endure."

I honestly hadn't thought about this one way or the other, but upon hearing it, thought, "Oh, that makes perfect sense." It was a similar reaction to the one I had to the article about how white men raped black women on a mass scale during the Jim Crow era, as a counterpart to lynchings: "How has this never occurred to me?! Of course they did."

(Is widespread, perpetual rape the historical norm? Or is it just stochastically scattered in pockets throughout history? Is it below my unbearable threshhold or above it?)

Minivet writes: Does this map, based on a extremely informal Instagram poll, match our hivemind wisdom? 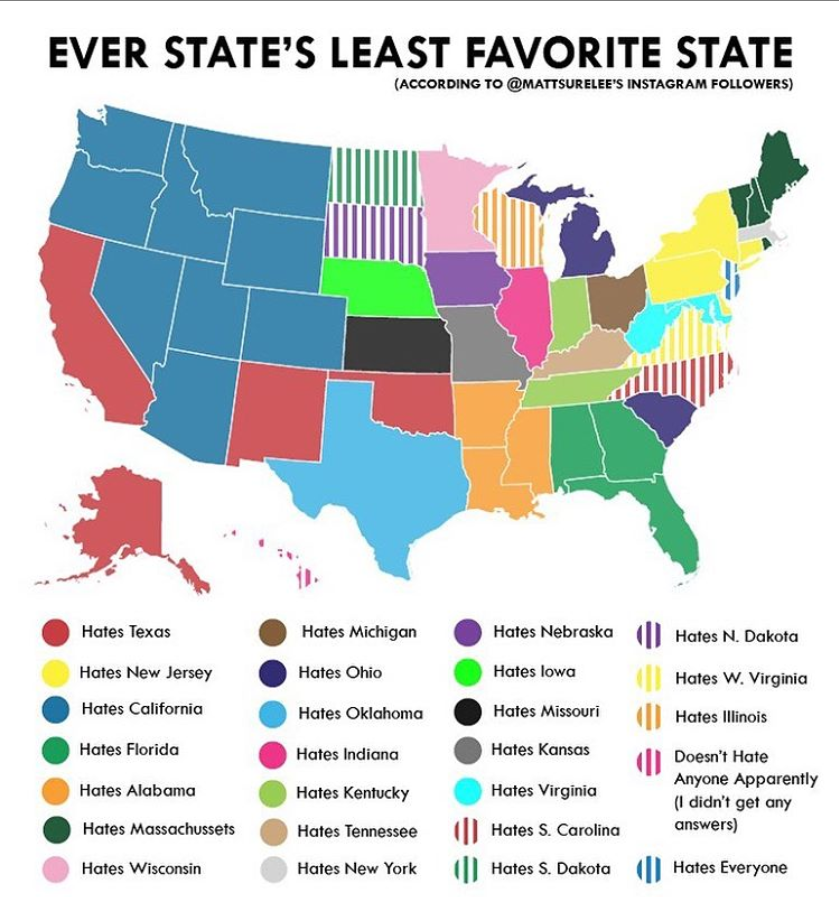 The most common trend sees to be states hate the higher-population states that neighbor them, like New England > Massachusetts, the West > California, and Georgia/Alabama > Florida. But the greater New York area mostly hates New Jersey. And I wouldn't have guessed that Alabama would be hated by the three states west of it.

Heebie's take: Florida is the funniest, and I would have expected more states - like Colorado - to hate Texas.

Having the day stretch from 1 pm to 3 am over consecutive days is pretty goddamn shameless. Just go ahead and put a requirement in that you have to make your case without using the letter `e'.

J, Robot writes: I've been rewatching Endeavour recently (or "one of those boring PBS British murder mysteries in which people drink a lot of tea," as Mr. Robot describes them), and this seems like something straight out of a script.

Heebie's take: You can tell the author had a lot of fun writing this:

An associate professor in papyrology and Greek literature at Oxford, Obbink occupies one of the plum jobs in his field. Born in Nebraska and now in his early 60s, this lugubrious, crumpled, owlish man has "won at the game of academia", said Candida Moss, professor of theology at Birmingham University.

I haven't read the whole thing yet, but it's one of those stories of Hobby Lobby paying massive amounts of money for early fragments of Bibles for their Bible museum. This guy either being a big old thief, or being framed, or who knows what.

In total, the EES has now discovered that 120 fragments have gone missing from the Oxyrhynchus collection over the past 10 years. Since the appearance, in June 2019, of that fateful purchase agreement and invoice bearing Obbink's name, the scale of the scandal has taken time to sink in. What kind of a person - what kind of an academic - would steal, sell, and profit from artefacts in their care? Such an act would be "the most staggering betrayal of the values and ethics of our profession", according to the Manchester University papyrologist Roberta Mazza.