Also, remember when United charged us $145 for a single bag weighing 54 lbs for two people, over the limit of 50 lbs per person? I welcome this new policy by Spirit Airlines, charging for overhead space as well as checked luggage. This corrects a lot of the stupid perverse incentives created by only charging for checking luggage. Incentivizing carry-on luggage is idiotic because of the delays in security checks and finite overhead space. But incentivizing packing lightly is very different, and that is fine and dandy with me.

(The oversize penalty of $120 is still worth a big old fuck you, however, since first class customers are allowed baggage weighing up to 70 lbs. If they were genuinely worried about their worker's backs, they'd sell you a $5 duffel bag for $35 and tell you to reorganize your luggage.)

Putting the "u" in Revenue.

I'm currently in the final stages of putting off filing my taxes, mostly because I'm lazy. Consider this post the antepenultimate act of procrastination (as I'll probably go get a cup of coffee once I'm done writing this).

A silly idea that occurred to me—which idea is probably going to seem really silly to me about fifteen seconds after I post this and you lot tear it to shreds—is that, similar to the portion of your taxes where you're given the opportunity to give money to the Presidential Election Campaign Fund, you should be given the opportunity to give (or, dare I say, withhold!) some nominal amount (let's say $1 or $5 or $10) from the government agency or department or program of your choosing.

This is clearly a fantastic idea and even a nod to the recent whiners who would institute a plebiscitary democracy (only when their preferred party is out of power, it should be noted), not that giving a nod to that crowd is a personal goal of mine, but to the extent that they have a gripe that resonates with the general public, it's the "gubmint spendin' our monies without our consent!" thing.

Solution? Give people a(n admittedly rather small) stake in the budgeting process.

And why, in Heaven's name, is the back of your head bald?

Colin Powell's former chief of staff, with the presumed backing of CP himself, says that Dubya, Cheney, and Rumsfeld were aware of the innocence of the majority of the Guantanamo detainees and didn't care. See? How timely!

Also, if you're looking, people are talking about the Supreme Court in the "Prayers for relief" thread. Once again, I feel compelled by duty to mention that I myself would make a stellar Justice.

But they wanted it!

Via Bërubë, whose thread got me also to read that other CT thread (or at least post), you know the one about the 70s and how that explains (and I suppose also excuses) everything. Now here is a question for you. Douthat's role as a Times columnist is, as I understand it, to espouse conservative opinions while also occasionally saying things that a nonconservative can read with agreement, thinking, "I guess he is worth looking at occasionally—I mean he's not totally off his rocker". (Let's set aside the question of why Douthat's being a conservative might have led him to defend the one true and universal church in this instance, especially via so paradoxical and idiotic an argument.) Surely this is a gimme! One wouldn't have to venture very far into the land of the sane to write 750 words about how, hey, child abuse, maybe not so nice. Plus it would let him give exhibit some moral clarity, which I understand is popular on his side of the aisle.

When you exclude mortgage and rent, average spending per city is quite different than you'd expect. Or I expected. Austin ranks first, with the average household spending 67K per year. The US average is 37K. That's a bit shocking to me. Austinites must make a combined household income of what, $140K/year? Average?

This is not bsnyc

And this photo isn't recent, either. But it is mine. 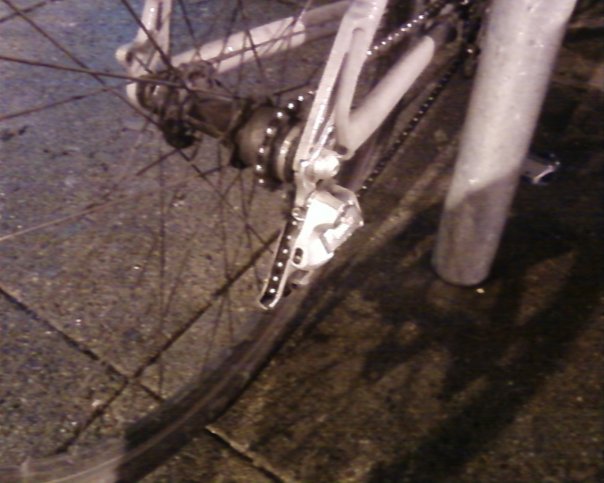 Reading the Greenwald v. Kerr thread on CT is painful, true, but even more than the interventions of LB and Halford, the phrase "facial challenge" helps make it bearable.

And she already dribbles

In the last day or two we've discovered that Hawaiian Punch freaking loves bouncing a ball back and forth with you. She gets so excited that she'll pant and shriek. Of course, I'm super excited for this definitive proof that my kid will be more athletic than yours.

On my way to work just now, I came to a barricade, and police were checking every car's license and registration. After handing my documents over, I asked the guy why they were checking. He just shrugged good-naturedly and waved me on.

How common is this? I've come to one of these before, but it was about twenty miles from the Mexican border, and so I assumed they were coasting under some sort of border patrol halo. (Presumably this checkpoint was set up because the town that I work in is mostly Hispanic, and very poor.) Are these checkpoints springing up everywhere? How is this legal again?

A federal appeals court ruled Tuesday that the Federal Communications Commission lacks the authority to force Internet service providers to keep their networks open to all forms of content, throwing into doubt the agency's status as watchdog of the Web.

With maybe a glimmer of hope:

The court's decision could prompt the FCC or Congress to write new rules or laws to more concretely establish the agency as a regulator of Internet services.

Am I over-interpreting the tea leaves here, or is this, as it looks, a coup for Big Internet?

My (eighteen-month-older) brother is fond of being offensive, to an excessive extent. Jews from the Holocaust? Teh Gays? Black people everywhere? People who were raped?

Ha! Another day at Joketown with, well, let's call him Joe.

I have no idea how to talk to him about "maybe don't say that", and it's extra weird because he's politically pretty liberal. He just likes pushing peoples' buttons, just 'cause.

Republicans all agree that Iraq was a mistake.

My first post title seems slightly NSFW, what with the big bold font and all.

Previously, the university had prohibited such relationships only when the faculty member had "direct pedagogical or supervisory responsibilities" over the student. That remains the rule for affairs between faculty and graduate or professional students, and between grad students and undergrads.

This raises all sorts of complicated questions. What about cuddling? Or finger-banging?

Not one moment after reading this article did I receive the following e-mail from a student:

I just wanted to let you know that I had the urge to run to your office and kiss you on the cheek after I finished that HW assignment haha. I feel like the HW assignments for the rest of the semester should be just like that one. Just thought you might enjoy sharing my excitement about Calculus.

Fortunately I'm quite chaste with my students, so we should be fine.

I played "Scrabble" in Scrabble, and time stood still.

The rules of word game Scrabble are being changed for the first time in its history to allow the use of proper nouns, games company Mattel has said.

And that in deed and not in word alone

Unfogged is a blog for procrastinators. That is why it returned not yesterday but rather earlier today.

Perhaps you wish to know what happened? Then you, sweet reader, can continue reading … below the fold. It is truly an uninteresting, stupid story.

Well, basically, I have no idea what happened to set all this off. I know only that on 4/2/10 (yes—Good Friday) a file, in the directory in which bind looks for zone files, called "unfogged.com.saved_by_psa.1" was created. I presume by some software called "psa". I presume also that at the same time the zone file that contains all the information needed to answer DNS queries was deleted. You can probably guess what it was called. Incidentally, in case you're curious about the ".1" suffix, there already existed a file called "unfogged.com.saved_by_psa", created on 4/1/09—the time of our server change last year. Interesting! SIgnificant! Not understood by me!

Once I discovered this I swiftly, swift as the wind, simply copied the backup into the file "unfogged.com", as referenced in named.conf. That was, I don't know, Friday evening or Saturday morning or something. Probably Friday. SO, why did it take until around 2pm (Pacific) today for things to get sorted out? Patience! First I noticed a typo or two in the restored backup. Fixing those fixed nothing, however. (It must be added that I was at the Pacific APA for much of the weekend, and Becks was moving, and ogged (PBUH, on whom we occasionally call in times of need, and who answers) was away as well.) Anyway, no progress. We got our hosts involved. They turned out to think we were still on our old server, with its old IP address. They also confirmed for us that our load was not too high.

So eventually it dawned on me that I should look at bind's output when started up. It turned out that since the backup file had been created to be readable only by root, so too was the new zone file, so bind, which runs as its own user, couldn't read it. And … that was it. Yes, for real.

It just goes to show, it's always better to ask permission than waste your time reading dig(1)'s man page. Or something.

The Land of the Blueberries

Sometimes, I feel a great sadness welling up inside me, when I realize there are years and years of people's post-dentist, drugged-up nuttiness not captured on cell-phone video.

But then, we should be happy with what we do get, I suppose.