LW writes: I read the Caracas Chronicles to keep up with Venezuela. English language material, here is one nicely written column.


"They told Zea," the Student Center president, "that people who signed won't be able to shop at the PDVal any more."

This was serious. As a student, money is tight, and the deeply discounted groceries on offer at the state-controlled PDVal shop his Consejo Comunal (Communal Council) runs are the reason D.M.'s able to stay in school.


"They have people to snoop around your business, pretty much telling you how to run it. People from SUNDDE make sure you are selling products at the right price, and also prevent queues from starting inside the stores. Almost impossible. As soon as anyone starts baking bread, people line up in the streets. There's just no way to manage so many people!"

Heebie's take: the one harrowing fact that has shown up in my FB feed recently is that the Venezuelans in extreme poverty have lost about 20 pounds in the last year, due to food shortages. Spike's abbreviated version seemed mostly right to me:

Well then, allow me to mansplain: the Venezuelan proletariat seized the means of production a while back. Judging by the upper-class Venezuelans I know, the bourgeois totally had it coming.

But it hasn't gone so well and by now the "entrenched corrupt strongman" phase of the revolution has run well past its sell-by date. That, combined with low oil prices, has created an economic situation in which you can't buy toilet paper.

So, shit is fucked up and bullshit, and the current strongman isn't as strong as the last guy (who died of natural causes a few years back). The regime is clamping down but loosing its grip, and the whole thing is taking a long time to unfold and a lot of people are getting hurt.

It's a bit breezy, but basically right - I think Chavez jumped the shark ten years ago, and Maduro is a humanitarian crisis.

This is going to sound like a Slatepitch, but I'm just thinking out loud here. One of the old chestnuts of climate change stories is this is precisely the kind of problem humans are terrible at dealing with because it 1) requires massive collective action to 2) change the status quo to 3) deal with a problem in the future.

And that sounds right, but if it's right, wouldn't the wiser course have been to take the inadequate human response as a given (or an input, if you like) and redirected the substantial energy expended to forestall climate change toward dealing with its inevitable effects, instead? Obviously you can do both, and one can buy time for the other, but even so, it sure seems that the activism around this issue has been focused on prevention, and when that fails, we'll wish we'd spent more time on water transport, or sea-wall technology, or whatever.

And I wonder if this generalizes: when it's a problem that humans are wired to fail to prevent, save your breath and work on dealing with the consequences.

Mossy Character writes: At risk of crassness, I point out that that there has been apparently no mention of the Manchester attack on the blog since its occurence. While I neither blame nor praise, I find this an interesting fact. Are we just tired of this shit? Has the Trump administration put terrorism into perspective? Has the north Brexited our hearts? Are you all Liverpool fans? Myself, I barely noticed, and consider these things essentially background noise; but it isn't my country.

Heebie's take: This is similar to the discussion of the concentration camp for gay men in Chechnya. Or how I've been unable to figure out how to post on Venezuela. There a certain kind of modern horror that doesn't lend itself to debate and discussion, and I find myself at a loss as to how to acknowledge it in a discussion-based space like Unfogged. (Or 34 refugees - mostly small children - drowning off the coast of Libya. I don't even know how to begin with that one.)

Mossy may have been making the point that the larger media has downplayed the Manchester attack? There was a point when mass shootings in the US stopped holding the media's attention unless they cleared some new bar, and it seems like they've become less frequent, possibly, in the last two years or so. It is possible that there's a cycle to these things. The whole thing is awful.

Collin County, just north of Dallas, is making a play to be the worst county in the United States. On the plus side, this is how you intentionally gerrymander yourself.

I am completely in favor of having conservatives build a new settlement and make it opt-in, ie in places with negligible existing poor and marginalized populations*. I even it find it kind of fascinating to watch them predictably run in to the same damn problems of collective living - omg, how are we going to pay for our streets and schools?! - as they battled in their oppressive previous suburb.

*Gay kids and kids with medical problems get born everywhere, and so they're still the collateral damage.

"When I did this now I said, I probably, maybe will confuse people, maybe I'll expand that, you know, lengthen the time because it should be over with, in my opinion, should have been over with a long time ago."

[F]rom a 1992 Charlie Rose interview: "Ross Perot, he made some monumental mistakes. Had he not dropped out of the election, had he not made the gaffes about the watch dogs and the guard dogs, if he didn't have three or four bad days -- and they were real bad days -- he could have convincingly won this crazy election."

It's uninmaginable that he could track that many clauses together these days. Even his best sentences are pretty dumb.

The Power of Choice

We are changing your retirement plan. Your old money will stay in your old account, with the guaranteed 3% minimum earning rate you are accustomed to. New money will go into a new account, with a guaranteed rate between 1% and 3%. We feel this will allow us to be more responsive to the prevailing interest rate environment.

Fuck you very much,
TIAA-KREF 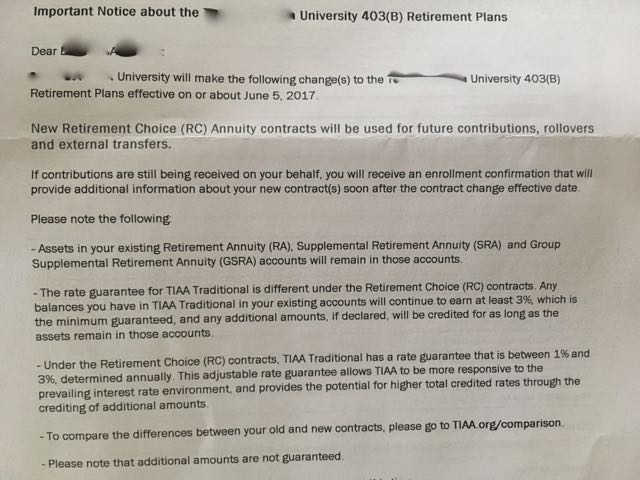 I was searching for something and came across this, from Time magazine in 1944.

Then I wondered what became of this woman who was a biochemist in 1944. She was very impressive, having been one of the first women to attend MIT, and Lieutenant Bering was wildly impressive, and she did good-hearted-rich-lady stuff during the course of their long and happy lives together. Happy Tuesday.

You think you're so anti-lead. Now this guy, he was anti-lead.

Nick S. writes: These articles about the unintended consequences of a change to how the Amazon "Buy" button works is interesting for what it says about both the book industry and amazon.

It used to be that when you were shopping for a new copy of a book and clicked "Add to Cart," you were buying the book from Amazon itself. Amazon, in turn, had bought the book from its publisher or its publisher's wholesalers, just like if you went to any other bookstore selling new copies of books. There was a clear supply chain that sent your money directly into the pockets of the people who wrote and published the book you were buying.

The articles talk about the significance of this change for publishers an authors but one of the things which particularly caught my eye was this.

I finally clued in to how problematic this policy is a couple weeks ago when one of my authors emailed me to inform me that her book was no longer being listed on Amazon--at all--as available from her publisher, in this case SparkPress, one of my company's two imprints. When you typed in the title of her book, the only listings that came up were from third-party sellers. Amazon's policy states that "eligible sellers will be able to compete for the buy box," but in this case, we had been completely wiped off of Amazon as an eligible seller in any capacity, without being notified.

If the Buy Box winner for a book is out of stock, it will look to most customers as though the book is out of stock everywhere. You'll have to click through several buttons to get to a list of all the sellers on Amazon that carry the book and find one that's still stocking it. Amazon's algorithm is weighted toward sellers that are known to keep their books in stock, ostensibly to avoid this very inconvenience -- but judging from the frantic state of Book Twitter, a number of books appear to have already fallen into this trap, particularly debuts.

As a computer programmer, this looks like exactly the sort of problem that shows up when software runs the world. The goal for any developer is to have a (relatively) well-defined set of inputs and outputs and some rules for getting from A to B. But that tends to oversimplify the questions at stake*. In this case, the change makes perfect sense from a software perspective, but obviously creates a bunch of problems.

* Not a new observation. I'd note that Ellen Ullman's Close To The Machine (1997) was good at offering some early and sharp observations about the problems with losing ambiguity by moving from a process run by human judgement to computers.