Moss-moss writes: I ask you, with tears in my eyes: if random of acts of grotesque fiduciary irresponsibility aren't the point of being Forbes #1, what is?


"We are of course very concerned about the level of carbon dioxide emissions generated from bitcoin mining," said Ben Dear, CEO of Osmosis Investment Management, a sustainable investor managing around $2.2 billion in assets that holds Tesla stock in several portfolios.

It's hard to underestimate the impact of the pandemic. Amazon has opened very, very quickly these warehouses across the country. It's hired workers at an astonishingly fast rate. Those workers are working as hard as you could imagine because more and more people are shopping from home, and they're doing it while their lives and their health is under threat because of the pandemic. I think all of those things have come together to create this situation where a union might be able to take hold in a way it wouldn't have a year ago.

Voting is going to be happening for weeks. When are we going to know what happened?

The balloting ends at the end of March, and then there'll be a count. And again, because we live in pandemic times, the count will actually be broadcast via Zoom by the NLRB, and Amazon's lawyers and the union's lawyers will watch.

They're literally going to count one by one.

That is my understanding, because both Amazon and the union have the right to challenge ballots. You could imagine an Amazon lawyer saying "that signature isn't clear" or "there's no signature on that envelope, throw it out."

Heebie's take: That would be great. I hope they make it.

A horrible man, who used his considerable talents to make the world a worse place every day he was alive. His death solves nothing, but it gives us a chance to think about how cruel and popular he was.

Nick S. writes: I thought this interview was good:

What leads to radicalization occurring on that sort of mass scale?

First, you have to have a vulnerable audience receptive to the extremist narrative--individuals who are scared, angry, isolated and looking for answers that satisfy their own personal biases, looking to cast blame for their problems on someone else. They find narratives that tell them their problems are not their fault; it's the product of a conspiracy trying to undermine your way of life and well-being. Those messages are deeply appealing, because it's harder to look inside and question your own decision-making and behaviors. Over the past year in particular, we've had an unprecedented situation that has left a very large audience receptive to those narratives. The pandemic has left people scared, without jobs and looking for answers to what happens next.

The second thing you need is an influential voice pushing the extremist narrative. And over the past 4Â½ years, we have had a very influential political leader [President Donald Trump] pushing a narrative that is not only polarizing--not only highlighting that the right and left are far apart on policy issues and disagree on discretionary spending--it's a narrative of "othering." It's a narrative that casts the other side as evil, as "enemies," as individuals you have to fight at all costs in order to preserve your way of life. We saw this, whether [Trump's "others"] were Democrats, the news media or the scientific community.

The final thing you need is a mechanism to spread that narrative to the masses. Historically, mass radicalization took time. If an influential leader wanted to spread a message, they'd do it through newspapers or political speeches in towns and cities throughout their country, and it could take a while for that message to spread. But that's not our reality anymore.

The comparison to other radicalized groups are interesting:

In terms of extremist individuals [overall], when you look at the backgrounds, you see everything you can imagine. You see well-adjusted individuals who have good jobs, who are married with children, but maybe have some identity needs that aren't being fulfilled, who want to matter more than they think they do, and find extremist narratives appealing. We see individuals who have had horrible lives--victims of physical, emotional and sexual abuse as children; people with substance-use disorders who join an extremist movement because it gives them access to friends, parties and drugs. We see young people. We see old people. We see people with mental illness. We see people without mental illness.

Michael Jensen thinks having Trump out of office will help, and that it's also important to not minimize

So, given that, should we expect more January 6-style insurrections in the future, or do you see that as more of an anomaly?

I've had colleagues--people I admire and really respect--suggest that we're confronting a mass movement that is ready, willing and able to engage in unprecedented levels of violence. That's a position that I respectfully disagree with.

The conditions that allowed for January 6 were kind of a perfect storm that we may not get again. I think that the conditions have now changed. The political leadership is largely gone, and the ones who were pushing that [extremist] narrative have been silenced. Now, that could be temporary or it could be long term, but right now, it looks like it has some staying power. At this point, [major] social media platforms are cracking down on the promotion of these [extremist] narratives, so we're seeing individuals move to smaller platforms. Telegram and Parler and Gab just don't have the reach of Twitter and Facebook and YouTube; they can reach millions of people, but not hundreds of millions.

There's also a change to the audience itself. Its level of vulnerability and receptiveness is starting to decrease. Life is going to get back to normal at some point. People are going to get back to work. They're not going to be as isolated and scared anymore. They just may not be as receptive [to extremist narratives].

It's also really important to recognize that while many people were emboldened by what happened on January 6, many were demoralized and demobilized. We've seen this in the QAnon community. We've seen this in communities pushing conspiracies around election fraud. Many people voiced their concerns that that was not where they were looking for the movement to go, and they've really started to walk away from it.

We have to recognize that it's one thing for people to change their views and quite another for people to change their behaviors. Most people who radicalize in terms of their views will not mobilize on behalf of them--will not pick up a gun and go to a mall and open fire on unsuspecting innocent people. That is not the most common outcome for individuals who radicalize. We have to be really smart about how we react to it. An overreaction can do more harm than good.

Heebie's take: The article talks about how things should improve just because life will feel more normal, people will return to work, and so on. I think that's right. IMO, the most important things to decrease radicalization are a massive stimulus bill that people can feel in many parts of their lives, which will connect with the milder people who don't want to be afraid of Biden anymore, and keeping Trump off twitter. Trump is unlike other influential leaders in that his interior monologue is relentlessly single-minded in focus. He can unify a message better than other people. Without him, there won't be one single laser beam concentrating all this radicalism onto a single point.

We had plenty of fragmented, decentralized radicalized domestic terrorists in 2015, however. I don't see that going away any time soon.

We haven't had anything like this in the 20 years I've lived in Texas. It snowed like 4-5" last night and is currently 9°, which is a record. Rolling blackouts are going to continue all day. I'm sorry for all those times I mocked you all for being cold and called you guys yellow-bellied sissies for wearing jackets. 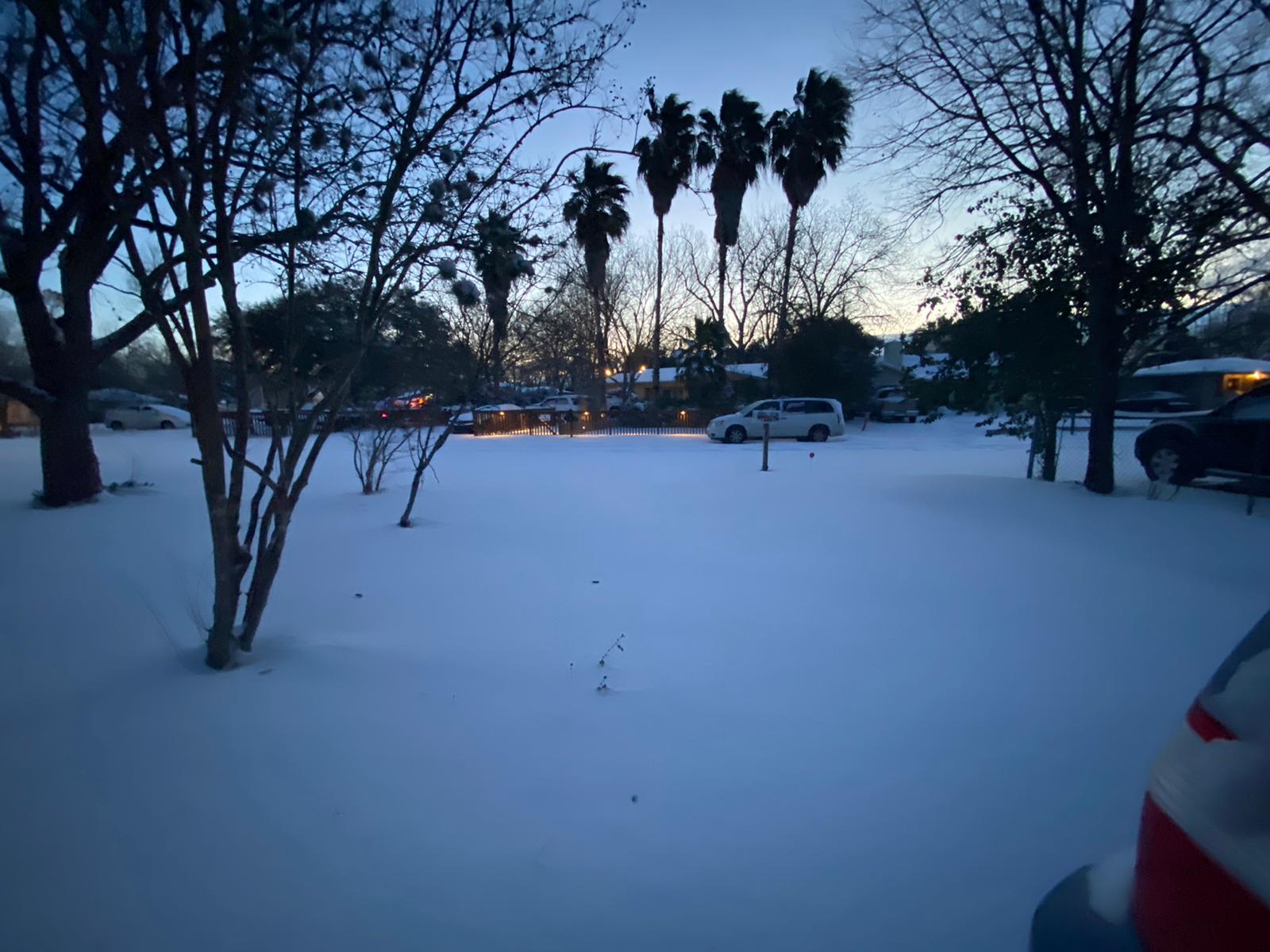 Mossy Character writes: One aspect that particularly haunted me after Trump's election was the complete erasure in memory of anything bad happening the last time we had a Republican president. It made me realize that you factually cannot solve climate change, because the human species can't hang on to a truth for ten years, at the most, before someone successfully profits off selling the opposite and undoes everything.

With 1.2 million respondents, ... results span 50 countries1 covering 56% of the world's population...
Over all 50 countries, 64% of people said that climate change was an emergency...
Regionally, the proportion of people who said climate change is a global emergency had a high level of support everywhere - in Western Europe and North America (72%), Eastern Europe and Central Asia (65%), Arab States (64%), Latin America and Caribbean (63%), Asia and Pacific (63%), and Sub-Saharan Africa (61%)...
There were consistently very high levels of demand for climate action among people with post-secondary education in all countries...
Nearly 70% of under-18s said that climate change is a global emergency, compared to 65% of those aged 18-35, 66% aged 36-59 and 58% of those aged over 60.

There are many bones to pick with the methodology: the PRC is glaringly absent (though for this particular purpose that probably doesn't matter); coverage of Least Developed Countries and Small Island States is spotty to nonexistent, splashy headlines on the results notwithstanding (though bluntly these countries will make little difference either way); the questions are to my mind thin and leading "Do you agree with this feel-good bumper sticker?!"

All that said, rich- and middle-income country coverage looks fairly solid, with landslide results across the board, and bumper stickers are what platforms are made of.

Heebie's take: I'm glad there's reasonable agreement that there's a crisis? I just don't know how long people can hang on to a feeling of urgency before getting used to it. It seems like the necessary conditions for sustained attention are:

- individuals with voting power have to be regularly reminded on an emotional level of consequences and suffering, over the course of decades, and as new voters come of age, it has to be imprinted on them
- politicians with power have to feel like it's in their own best interests towards maintaining power to take steps that solve the problem
- rich, well-connected people who stand to make a lot of money from the change have to outweigh rich, well-connected people who stand to lose their current source of money.
- policy has to be well-designed and robust enough to not have so many unintended consequences as to be its own undoing
- governments have to be functional enough to enforce whatever is implemented

That is why I think we're basically in hospice mode with respect to the environment. It's very upsetting and I can't think about it directly for too long at a single setting.