I cannot stomach talking about the tax bill, so let's keep that to the Thursday Ire thread. Instead, immerse yourself in this story of The true story of the fake US embassy in Ghana which Chris Y sends in and notes, "Long but weird."

Tell me something you find exquisitely, painfully beautiful. And no yucking anyone's yum, to use Ogged's grody but useful expression. It takes vulnerability to say you find something beautiful.

Mine is below the cut. This cat. How did the artist know to do this so perfectly? Create the hard edge of the watercolor line, crossing the other, so right? The feet aren't quite right but I find it entirely forgivable. 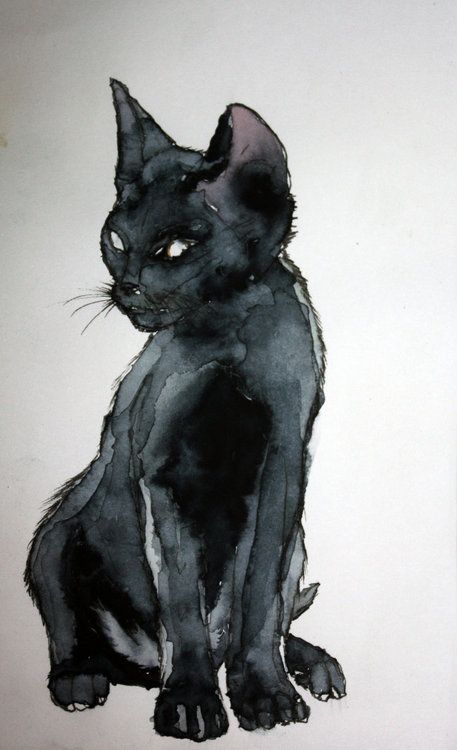 (I had trouble narrowing it down to one. I don't actually know who the artist is, though I've tried to figure it out. My favorite cat artists are Shozo Ozaki, Xu Beihong, Endre Penovac is always good, and of course Clare Turlay Newberry.) (In fact, I have a whole pinterest board dedicated to things that I find harrowingly beautiful, and I use it to bliss out when I'm stressed. I'm happy to share it, but you'd have to email me because it's under my real name.)

I heard there was a set of words
That the kids memed and confused the olds
But you don't really care for poems, do you?
Well it goes like this: the plums, the box,
The sweet cold taste, and the breakfast lost,
The baffling tweets reworking Carlos Williams

It's Thursday, not Friday, but I'm feeling incoherently ragey about the likelihood of Republican tax cuts passing, how it will end cancer treatments for Medicare patients, how Matt Lauer had a button under his desk which locked his door, how feminist writers get offered disingenuous writing jobs setting them up to be strawmen, and how my perfectly nice colleague with parallel career gets break after break making his life easier and getting praise and recognition every time he sneezes in stark contrast to my path whoops, that's a quiet part.

I don't know why I'm posting this except that I'm living in a fantasy world where it's not mean-spirited. Certainly the first one - Britney Spears - is mean-spirited, so just scroll on by that one.

The best of them are really well done and realistic, and you could perhaps imagine knowing the celebrity in real life. Also the vast bulk of the celebrities are faces you know, no one who has sprung up in the last ten years. Also I just love the Anna Wintour one.

I don't normally bring the site up full screen, but I did today, and it struck me that it has to be one of very few sites that have had no styling changes in over ten years, but don't look dated. Burke was a goddamned genius, I tell you what.

Is this really the case that there are regional differences between the work week, accounting for a full extra 5 hours of work per week?

I mostly had never thought about it - I know that 9-5 is used conversationally and lyrically, obviously, but in practice on those occasions when it's been called to my attention, it seems to be 8-5. In other words, bank hours are the exception. What's the scope of this phenomenon? Am I supposed to google?

Jammies and I listened to the first half of Sapiens on the drive home from Denver over the weekend. I'm basically enjoying it, though I have some gripes, but also we're only halfway through.

The author is very good at a couple points:
1. the power of culture, and how culture arose from the cognitive revolution, and thus makes people responsive to change in a way that's unlike any other species.
2. the temporal axis is not the direction of "good" and "progress" and "forward", although some trends do seem to have directionality.
3. people have been wildly destructive to their environment since about 70K BC, starting with the obliteration of megaflora and megafauna each time they set foot on a new region.

I emerged on Monday from the haze of listening to this audiobook for hours and found myself back in the world of Trump and Project Veritas and Roy Moore. Placing the politics of 2017 within the context of humanity since 70K BC really makes it painfully obvious that we can and will happily drive ourselves towards the worst possible outcomes, in any sphere you choose to consider, without a stutter-step. We're so doomed.

Bright Spots In A Fallen World

At work, my team sits near two other teams (each with about five programmers), and the most recent programming hire for each team has been a young woman.

One of our product managers is coming back today from (twelve weeks) (paid) maternity leave, and this morning two of the young guys were cleaning her desk before she got in.

It would be very easy, if one didn't follow the news, to think that all's right with the world.

Also, apparently while I was driving across the middle third of the country, the NYT slobbered all over some Nazis and the internet exploded. I don't know where they learned to troll their own readers like that.

If you like maps, here's a detailed resource about where Native American groups live. They state that the map doesn't represent a particular moment in time, so I'm not exactly sure how that works. No native groups show up where I live, which must mean something about how they're sampling dates, and yet all of Florida is still considered Seminole and/or Timucuan, which must mean something entirely different about how they're sampling dates.

Dairy Queen writes: The kid is still nuts for linguistics, languages and literature. In our relatively lackadaisical fashion we are circling in on a draft application list. He has no interest in the US east coast, Midwest or south (and he's very stubborn, life too short to fight this fight, believe me). West coast list probably covered by UCB, UCLA & UCSC. Bleg questions posed to the commentariat, many thanks in advance! -

Thoughts on German universities for linguistics and also in general for quality of undergrad programs in the humanities & social sciences?