I guess impeachment is eating the world now.

There's never been as foregone a conclusion as the vote to acquit, but I'm at least enjoying Lev Parnas's revelations. 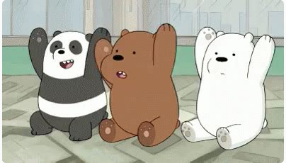 I think with the impending Senate trial and election season and worldwide catastrophe season, I'm more driven to distraction than ever. Did anybody even have the desire to watch the debates last night? But more importantly, how do we know these lil cutey guys are asleep, and not just being photographed with a really crazy shutter speed?

That link may not be convincing, but this one is more so. The lack of eyelids is not cute at all.

Dave W. writes: Cheryl Morgan has some data on gender distribution of Hugo Award fiction writers over the 2010s. It's interesting to put her graphs alongside my timeline of the Puppy attacks and nomination reforms (the new anti-slating reforms went into effect in 2017, after two years of intense slating from the Rabid Puppies in particular).

As I noted in my linked comment, I think what we are mostly seeing is a shift in the Hugo electorate in response to the failure of the Puppy attacks, although the reforms do encourage greater representation of subgroups within the electorate to keep one group from dominating the whole ballot via slating. The large number of women winners over the past 3 years is partly a result of the three volumes of N. K. Jemisin's Broken Earth trilogy sweeping Best Novel three years in a row, and Lois McMaster Bujold having two great series winning the new Best Series award for the first two years of its existence. But it also reflects that we have many more perspectives from women authors, non-binary authors, and writers of color represented among the finalists than in previous years, and so Worldcon members have been exposed to a lot more of this writing in the Hugo Voter packet, and seem to be liking what they see there.

(Quick status note: we are now in the nomination period for the 2020 Hugos (and the 1945 Retro-Hugos). Any member of the 2019 Worldcon, and also anyone who bought at least a supporting membership in CoNZealand, the 2020 Worldcon, prior to December 31st, is eligible to nominate, and should already have received an email to that effect. Once the finalists are announced sometime in April, the final vote will take place among members of CoNZealand, including supporting members. Those who buy at least a supporting membership (currently $75 NZD, about $50 US) before the close of the final voting round will be eligible to vote in the final round, download the 2020 Hugo Voter packet when it is available, and be eligible to nominate for the 2021 Hugos next year.)

Heebie's take: We spent yesterday at Heebie U talking about implicit bias and structural change vs. ineffective words or small changes that don't challenge the basic power structure. It's really nice to see structural change play out in an arena like this.

It can't possibly be true that people aged faster in the past. It must surely be an artifice of all the cosmetic practices of today - botox, hair dye, better make up - plus more absurdly strict selection practices for people who tend to be in the public eye.

Furthermore, people from 30-80 years ago look artificially older at age 40 or whatever because they're dressed like old fuddy-duddies. It wasn't a combover back then until you balded out from under it. Everybody pulled their pants up that high. Photographs weren't discarded if they weren't flattering.

And yet. If someone authoritative and medical told me sternly that there was still a factor that accelerated aging caused by poor nutrition and pollution and harder living back in the day, I wouldn't dismiss it.

(The balding is the detail I'm having trouble explaining. Did people bald earlier then? It's not like most men treat their balding nowadays. Of course, this is the least scientific of methods possible. I'm sure the Thinking Fast and Slow guy would disapprove.)

Oh, and sunscreen. And wind exposure.