Reading Hilzoy's take on the new "right of conscience" rule passed by the Bush administration makes me think this is part of a plot started a few years back to implement a de facto ban on abortion by making them too expensive for doctors to provide them. As Mother Jones wrote some years back:

The new tactic is to bombard providers with a barrage of costly rules....extra-stringent building codes that regulate everything from the width of hallways in clinics to the angles and jet types for drinking fountains. Abortion opponents want to create small, expensive obstacles that cumulatively make it harder for clinics to offer services--or, in the words of one right-to-life leader, to create an environment "where abortion may indeed be perfectly legal, but no one can get one."

If the right of conscience laws stay on the books, I can imagine a coordinated campaign among pro-lifers to get jobs at places like Planned Parenthood and then refusing to perform services once hired. If the new law gives them legal protections against being fired, PP and other organizations will either need to (1) reduce services to what can be performed by non-objecting employees, (2) hire additional staff, or (3) risk a costly lawsuit to shed the dead weight. Were they to get more and more infiltrated by people who refuse to perform the services they provide yet refuse to quit and can't be fired, they'd face a financial disaster.

In memory of Ogged. 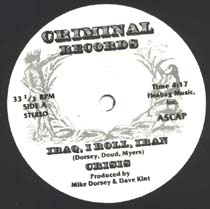 So, One Post Every Couple Of Weeks, And Then It's About Baking. 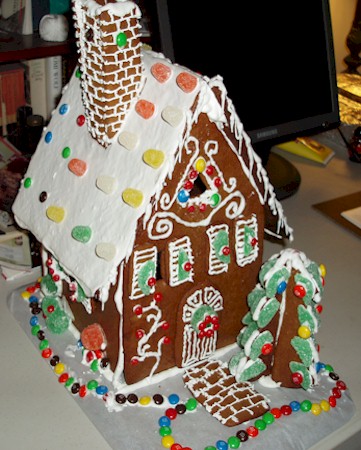 The traditional Breath family gingerbread house, as passed down from a 1978 issue of Ladies Home Journal (or something like that. The recipe's been recopied, and we've lost the original.) Newt and Sally assisted in the decoration.

Other than this, the holiday season is annoying the bejeezus out of me. I'm fresh out of bejeezus, and don't see it regenerating until New Year's.

It took over 25 years, but the murder of John Walsh's son has finally been solved. These paragraphs from the WaPo article really highlighted the good and the bad that came out of this. We're definitely better off with the advancements in solving crimes that resulted from this case but at what cost with all of the paranoia that came with it?

Adam's death, and his father's activism on his behalf, helped put faces on milk cartons, shopping bags and mailbox flyers, started fingerprinting programs and increased security at schools and stores. It spurred the creation of missing persons units at every large police department.

The case also prompted national legislation to create a national database and toll-free line devoted to missing children, and led to the start of "America's Most Wanted," which brought those cases into millions of homes.

"He ended up really producing a generation of cautious and afraid kids who view all adults and strangers as a threat to them and it made parents extremely paranoid about the safety of their children," Moran said.

Klassy With A K

Is giving a shout out to the person who gave you a shout out. For those of you who missed the video, Spack's got it.

One of the most amusing parts of this whole thing to me is finding out how many people I know watch Maddow's show live based on their "OMG" emails or texts. There sure are a lot of ya. They should give her a raise.

So the Flight of the Conchords season two premier is available online here.

I hasten to underline that there are some problems with the show, viz., it's sometimes not funny. Also, it seems to fail the Bechdel Test. This information is troubling.

Nonetheless, I do think the show hits on some issues in the music business normally un-addressed by, well, lots of people.

It's a real crap shoot, obviously, to start a band and strive for success. But the type of contracts that get put before you once you get going can be laughable.

"ASCAP and BMI rights? Yes, thanks, we'd like those. Oh, and have you copyrighted that yet, by the by, because, um, we can help you with that. To a delicious tune."

Not that I'm surprised, nor are the folks you negotiate with surprised when you point out these terms are absurd. But do other businesses work this way? With contracts no one reads? I'm given to presume that they do.

Are you guys watching the "Day in 100 Seconds" videos at TPM? If not, you should -- they're amazing.

Here's one with a few new shoe puns, the real job of the media here.

And here's another, rich with Blago sound bites.

I'm hesitant to call these "amazing", because I want political discussion to be full of nuance and people arguing reasonably with one another. I also realize the previous sentence makes me sound like I'm asking these kids on my lawn to help me put some mp3s onto my phonograph machine.

So, my verdict is: yeah, a good round-up, considering the climate.

PSA: It really turns me on when I talk about my feelings

I thought this important video clip of dating advice might of be of service to the laydeez of the Unfoggedtariat. Because I'm a feminist.

For me they're usually forgotten radio pop hits

There's definitely a class of mythical songs, ghosty songs that you know were real songs but no one else has ever heard of. I'm currently haunted by this R&B remix of the Beach Boys "Good Vibrations". All I remember is that after the line about "I...I love the colorful clothes she wears..." this teen voice interjected "Cause she reminds me of my mama!"

I am partially haunted by a song that goes "(They call me) S....P...M....South Park Mexican..." but Jammies was actually in the car when we heard it on a road trip over the summer, and my existence was validated. It's this song. "I'm the one who told your kids to stay in school."

Years ago I was haunted by "I Could Never Be Your Woman" because I couldn't remember the title or content, just the Imperial March-esque hook. But then a friend had it on her ipod and I was exorcised.

You can see for yourself the damning evidence (complete with music theory!) here. There were actually several other videos up a couple days ago, which have since been removed, suggesting someone's lawyers are talking to youtube.

I admit that I don't know the legal standard. They seem to be playing in the same key and at the same tempo. And I don't believe that's a crime, but I'll leave it to the lawyers.

I will say, and this might be unconventional among music types, that Coldplay writes rather catchy melodies (even if they tend to end up in pretty boring songs) and that Satriani seems like an utter jackass. Not that this opinion has any legal bearing, mind you.

Perfect night for a slanket.

I don't want to alarm anyone, but there is a Winter Weather Advisory being issued by the National Weather Service for everyone in the Central Texas area until 12 pm CST Tuesday. The advisory is for freezing rain and light freezing drizzle. Please use caution when driving. Overnight low projected to be 31 degrees. Thank you.

Fancy some pigs in a blanket jello mold?

The Gallery of Regrettable Food can be found here, in barftastic glory, with marvelous pictures in 2-D realasmo-vision. Including Cooking with Dr. Pepper, the other other white meat, and Jello Confronts the Depression. Enjoy!

PS: Yes I remember that we had a thread on something similar once, you killjoy. There were no pictures.

So the shoe thing. What happens to the guy that throws the shoes? The end of this video is…odd.

Update: The video linked seems to have changed. This is closer to the original clip to which I wanted to link.

Really? I bet she's a holy terror behind closed doors.

I have a pet peeve for the vein of comments, spoken by an acquaintance (who has insufficient information), like "You can tell they have such a great relationship!" or "You can tell they'll be such great parents!"

No you can't. Sure, odds are that they won't be pathological parents and that their kids will emerge with a normal amount of wear and tear. But especially the relationship version - people's public face in a relationship tells you very, very little about what they're like under stress. It's kind of a normative, too. Great people can have big problems under the surface and still be great people, who happen to be coping with big problems.

(I know these comments are intended as innocuous small talk. I demand precision and accuracy or you shan't be an acquaintance of mine.)