She owed us so many poems.

This is just one of those bot-generated jokes, but it's making me laugh way too hard. 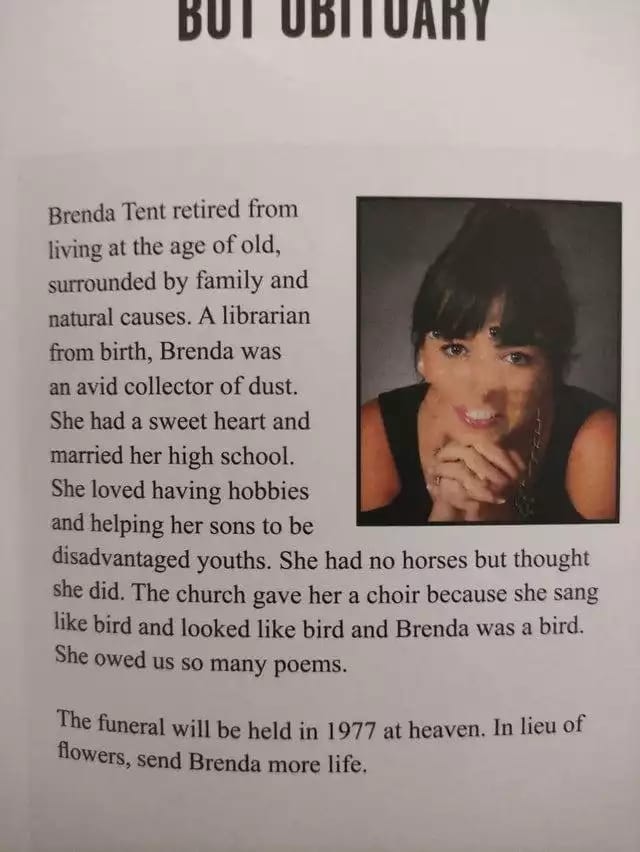 The Justice Department suing Texas is nice (and not surprising) and Mexico decriminalizing abortion is also nice (and more surprising because I hadn't been paying attention).

This black high school principal was suspended for promoting CRT, which he claims to have never promoted. His side is more plausible, since his opponents are acting like this:

Whitfield, the first Black principal to run Colleyville Heritage High School, became embroiled in a local controversy over critical race theory at a July 26 school board meeting. A man introduced in the meeting as Stetson Clark called the principal out by name, in violation of the meeting's rules, and demanded Whitfield be fired. Members of the audience hollered "fire him" and applauded, Whitfield said.

The recent dispute over critical race theory was not Whitfield's first clash with parents. In 2019, shortly after Whitfield was named the first Black principal of a middle school in Colleyville, a parent complained to the district about a photo Whitfield had posted on social media that showed him and his wife, who is White, in an embrace, celebrating their wedding anniversary.

"Is this the Dr. Whitfield we want as an example for our students?" the parent asked in an email that Whitfield recounted on Facebook. The district asked Whitfield to remove the photo to avoid further controversy, KXAS-TV reported.

Often racism is overt. Often racism is institutionalized. It's particularly insidious when racism is operating overtly within institutions, because it indicates that the wheels have completely come off the bus. Any people fighting against racism have been completely overrun and are not able to provide any meaningful bounds on behavior. Honestly if this kind of thing keeps up, Texas is going to get a bad name.

Guest Post - Well well, if it isn't the consequences of my own actions

Minivet writes: The part most people are quoting is:

Leaders in Whitefish say Mr. Spencer, who once ran his National Policy Institute from his mother's $3 million summer house here, is now an outcast in this resort town in the Rocky Mountains, unable to get a table at many of its restaurants. His organization has dissolved. Meanwhile, his wife has divorced him, and he is facing trial next month in Charlottesville, Va., over his role in the deadly 2017 neo-Nazi march there, but says he cannot afford a lawyer.

But other interesting parts:

...Ms. Gersh did not speak publicly about her ordeal at the time. Rabbi Roston kept a low profile, discouraging coverage in the Jewish news media to protect the congregation and avoid giving attackers the attention they craved. The congregation did not cancel its Hanukkah party in December 2016 but moved it from the rabbi's home to the conference room of a motel, with two armed security guards at the door. On each table, the rabbi placed a pile of supportive letters that had arrived from around the nation.

Volunteers distributed thousands of paper menorahs. "There were menorahs in every window in Whitefish," Ms. Gersh said. An anti-hate rally drew 600 participants in zero-degree weather. On the eve of the neo-Nazi march, Rabbi Roston organized a chicken and matzo ball soup get-together for 350 people at the middle school in Whitefish, in a demonstration of unity and appreciation.

On Martin Luther King's Birthday -- Monday, Jan. 16 -- not a single neo-Nazi turned up to march. "We could say they chickened out," Rabbi Roston joked.

In April, Ms. Gersh, represented by the Southern Poverty Law Center, filed suit against Mr. Anglin for invasion of privacy, intentional infliction of emotional distress and violations of Montana's Anti-Intimidation Act. In 2019, she won $14 million in damages. A team of lawyers is still searching for Mr. Anglin and his assets.

(Anglin is the one who mounted the intimidation campaign against Gersh, putatively in defense of Spencer and his mother, who both later disavowed him.)

Mr. Muhlfeld said he had last seen Mr. Spencer in 2019, skiing at the mountain resort. "He walked into the Summit House and summarily was booed by pretty much everyone," Mr. Muhlfeld said, referring to a restaurant there.

Hopefully more neo-Nazis can be so treated in the future. And maybe our Montanans here can tell us more that's relevant.

Heebie's take: I find this detail so chilling:

At one point, Rabbi Roston realized one of the anonymous antagonists was the father of her son's best friend. Her family did not confront the man, who has since moved away. "He had a lot of guns," she said.

Peep dropped this link the other week, on the fake high school that got ESPN to televise its terrible football team.

Then E. Messily sent in some more links about it: the Bishop Sycamore story is even weirder. And this one. And from one of the parents.