Emotional labor sure is an oft-applied label these days.

Emotional labor is simply the management of feelings (your own or someone else's) to accomplish some goal--to leave a customer satisfied or to get someone to do something they might not otherwise want to, or to keep your household functioning.

Nothing more, nothing less. The problem, sez our author, is that emotional labor is getting tossed around to label any imbalance of labor rooted in the patriarchy. So she reclassifies a bunch of incidents that were originally described as emotional labor in some other article I didn't read:

Gemma Hartley describes the rage she feels upon noticing a box that her husband got out is still out days later. She feels very real emotions about that box and what it represents, but feeling emotions about the failure of someone's else's domestic labor is not the same as doing emotional labor. What might follow is an argument in which Hartley performs emotional labor to make her husband feel better about this oversight, but the root problem here is about domestic, not emotional, labor.

"Noticing that a female colleague's comment was ignored and repeating it with credit, a technique known as amplification: That's emotional labor." That sounds like activism, actually, a socially important, usually unpaid labor that often goes unrecognized.

"Arranging office happy hours: Yep, emotional labor, too." Scheduling is a kind of clerical labor (yet another kind of labor women often do that goes unrecognized and unrewarded)

"Explaining to the world why unmarried women can't be left out of this conversation: You see where this is going, and if you think you're tired of 'whiny, self-obsessed snowflakes,' just imagine how exhausted we feel." That feeling of exhaustion that courses through you when you have to educate someone about something you expected would be common sense and self-apparent? That's called educational labor, or, being an educator.

I very much enjoyed her accuracy in labeling.

Fake Accent writes: This Thursday, 10/26 at Sharper Edge, sometime after 5, exact time to be determined.

Mossy Character writes: In which I said

I think one must have explicit epistemic standards [And maybe ideological standards too; though of course establishing an official epistemology would be ideological in itself.] established in law and enforced in real time.
...
ultimately you'll need bots parsing content and evaluating claims made against an established consensus reality.
...
Whichever regime establishes its standard first is likely to have serious staying power.

to which NW responded

this is why I believe that China and Israel are the only nations that have moved into the 21st century. Fascism has made its comeback. Censorship is coming next because you can't have common values without it.

If the only "21st Century" states are Israel and China, then I'm intending to stay in the 20th for as long as possible. I've lived in China for several years. Even as a relatively privileged foreigner, the tight control of the internet (and use of it to investigate people for relatively minor offenses - I know several other foreigners who were deported after being monitored through WeChat) is an obvious, day-to-day reminder of the State's high level of control over the lives of their citizens, and the poor use to which they put this control.

I later happened, timeously but not I think coincidentally, on this:

He was about to trash his paper copies of journal articles from the 1950s as they were, in theory, now available on Chinese digital databases his library subscribed to at great cost. But on a hunch, he checked and found something awry.
[...]
He found 11% of content was missing from the digital versions, including many of the journals' most-cited articles. The censorship was extremely fine-grained. It was a world away from the crude, keyword search approach used in the recent Cambridge University Press case where CUP initially complied with a request from Chinese censors to remove content from The China Quarterly. In Tiffert's case, those unfamiliar with the paper version would not notice the censorship.
[...]
Tiffert highlights the crucial edge modern Chinese censors enjoy: "Now, they can tinker endlessly with the digital record to achieve their goals without ever leaving their desks, making one non-destructive edit after another, each propagating nearly instantaneously around the globe, leaving behind no discernible trace or loose ends."
[...]
Librarians should pause before pulping dusty Chinese journals tucked away in compactors.

The full Tiffert paper (PDF) is fascinating and scary, and I recommend it highly. When all's said and done I'm nothing but a history geek, so this viscerally disturbs me in a way the other infowar noise hasn't yet.

Heebie's take: and when the abyss gets too terrifying, you can return to the Health and Wellness thread, or the Avoidance thread.

There's sort of a cultural divide in my department at work, between those who prefer to say "yes" and then never getting around to doing the thing, and those who prefer to say "no" if they know up front that they are not willing to commit the time and energy to the prospective idea. I'm mostly in the latter camp, but occasionally I see the wisdom of the former.

1. If you'll recall, I had an ongoing neck/shoulder blade spasm issue from roughly the fall of 2015 until I started PT in the spring of 2017. I went to PT for about eight weeks, and it was great. The thing is: I still do my entire PT routine three times a week - it takes about 20 minutes - and if I miss two in a row, the spasms come back. So the underlying problem is still there, but the PT keeps it at bay.

The other thing is that the PT routine has caused my shoulders to go up a size, and it's annoying that now a bunch of my clothes are too small in the shoulders. I'm often an XL now when trying on jackets and such, specifically for the shoulders.

3. This feels straight out of Gary Taubes:

Scientists have clarified how the Warburg effect, a phenomenon in which cancer cells rapidly break down sugars, stimulates tumor growth. This discovery provides evidence for a positive correlation between sugar and cancer, which may have far-reaching impacts on tailor-made diets for cancer patients.

I can't tell if this is just the latest details of something that's well-known and understood, or if it's game-changing. On the BRCA+ boards, it always sounds a little hocus-pocus when people with cancer start discussing their diets, by which I mean non-rigorous, not fanciful altogether. But maybe it's getting more rigorous.

4. How's your bod? (My mom uses the word bod and it made me cringe growing up, and yet here I am, bod bod semantic satiation bod.)

Now this is non-political!

It's All More Horrible

How are you feeling about your position?

Nick S writes: I read this story about Darrell Hammond a couple weeks ago and found it curious. The article is structured oddly, the headline, and the opening are about the decision within SNL to switch to having Baldwin portray Trump, but then it moves into a longer discussion of Hammond's life and career.

It struck me today that, like the joke in "Little Miss Sunshine" about the "the second highest regarded Proust scholar in th US", the story is about the mix of talent, ego, quirks of personality and neuroticism that it takes to excel at something which is both public and also marginalized.

[Jim] Downey calls [Hammond's Trump impression] "the gold standard." Later, as he watched Baldwin's Trump explode, turning the impression into a crowd-pleasing cartoon, Downey could understand why Michaels made the change. But he also got why it would baffle a perfectionist like Hammond.

It is as if, like, he has worked his lifetime on a device that repairs leaks in his hot-air balloon and then, oh my God, we have a leak in our hot-air balloon, and Darrell is standing there like, 'Guys?'â" Downey says. "â'Oh, no, let's bring in Alec Baldwin.'â"

Heebie's take: I think I have only seen the Baldwin impersonation from the second debates with Clinton, where he's stalking her like a shark, and honestly Kate McKinnon's impersonation is what knocks me dead in that one. I looked up this Hammond impression of Trump, and the skit did make me laugh, but more the Chris Christie impression than the Trump one, and mainly the writing and not the impressions per se.

Based on one year-old memory of Baldwin and one clip of Hammond, my well-informed opinion is thus: Trump impersonations are kind of easy because he's an exaggerated buffoon with no subtlety, and not very funny for the same reason. It's also possible that I am harboring so much anger at Trump that it's hard to find it funny until it is much, much ruder towards him. 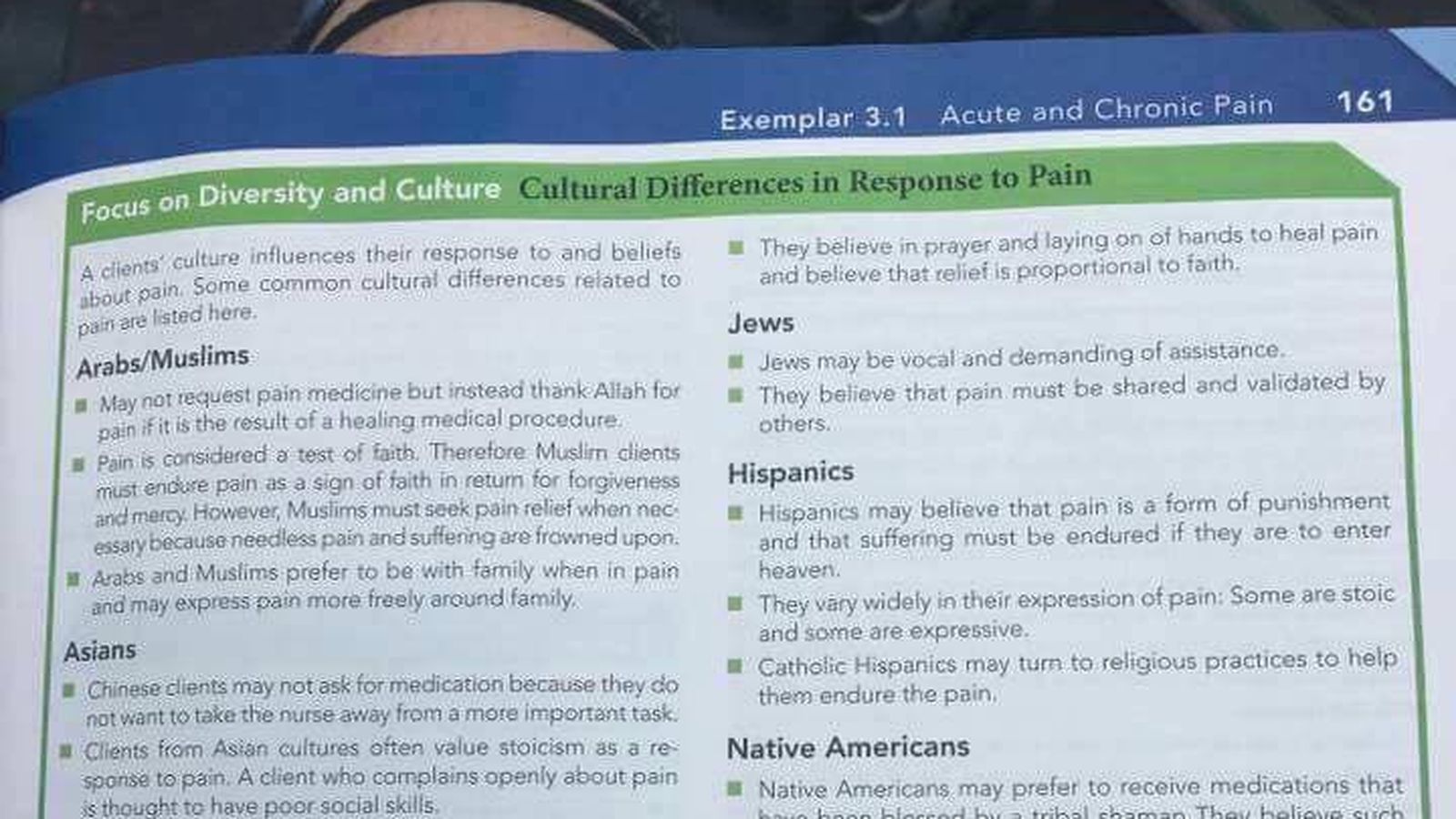 Here's a bigger picture including the cut off part, in case you wanted to know how black people experience pain. And the article.

It's such a terrible, terrible chart to put in a textbook. And yet, you can see some clueless-yet-well-intentioned person observing that all the studies on pain break out their results by culture group, and that the differences observed would be useful for nursing students to know. (You have to then posit, though, that the author felt that they needed to enhance the observations because maybe it wasn't as useful as it could be with just the results from various studies.)